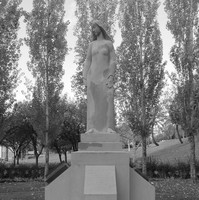 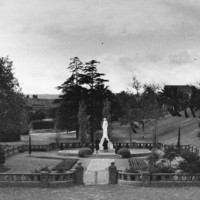 Unveiled by Lady Muriel Barclay-Harvey on 19 April 1941. Around 2000 people were reported to have attended.

The Pioneer Women's Memorial in the Garden of Remembrance is a tribute to the pioneer women of South Australia. Tucked behind Government House, and just off busy King William Street, it is a peaceful place that many enjoy visiting. It is also the much loved venue for Adelaide Writers Week when it comes alive with crowds gathering in the garden and the memorial taking centre stage with the attending writers.

There was strong support for a memorial to early women settlers especially those who had endured so much in the outback area. It was decided that the memorial should not be a burden on future generations of women. Adelaide Miethke conceived of a ‘Book of Remembrance` to raise funds, each sponsor, for the cost of one shilling recording her name and those of her ancestors on the Leaves of Remembrance. The completed book contained more than 20 000 names and raised over £1000 pounds. However most of the funds came from fetes, competitions, bridge parties, sports carnivals and other events.  A total of £6250 was raised and this was dedicated in 1937 to establishing a Flying sister base at Alice Springs, and £1000 for a Pioneer Women’s Garden of Remembrance, to be given to the Adelaide City Council.

Unveiled by Lady Muriel Barclay-Harvey on the 19 April 1941. Around 2 000 people were reported to have attended. The ceremony also officially declared open the base funded in Alice Springs, where the proceedings from Adelaide were broadcast via the national network.

The garden was designed by landscape designer Elsie Cornish and the statue created by Ola Cohn. A time recorder designed by Government Astronomer George Dodwell is located on the left side of the statue. 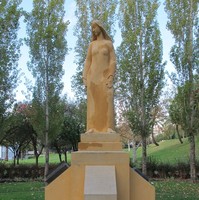 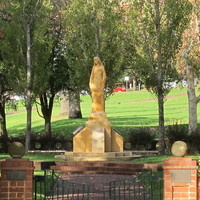 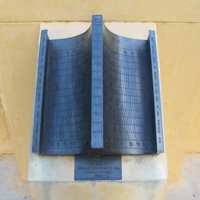 Sundial at the base of the Pioneer Women's Memorial sculpture, April 2014
Courtesy of/Photographer:Catherine Manning, History SA 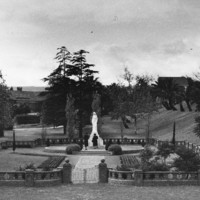