Born in Scotland in September 1815, John McDouall Stuart arrived in South Australia in January 1839. He worked as a surveyor, particularly in remote areas. After gaining a taste for exploration on Captain Charles Sturt’s expedition to central Australia in 1844-45, he undertook six major inland expeditions of his own.

Stuart made three expeditions in 1858-59 in the country west of Lake Torrens, exploring and searching for pastoral country and minerals. In 1860 he made his first attempt to cross the continent from south to north. He succeeded in locating the centre of the continent, but was turned back by Warumungu people at a place later called Attack Creek. His next attempt, in 1861, failed to find a way through thick scrub and waterless terrain.

Stuart’s third attempt to cross the continent started from Adelaide on 25 October 1861. His party reached the Indian Ocean on 24 July 1862, the first Europeans to complete the challenge.  Just two days later they turned for the long trip home, making their way through drying country on ailing horses. Stuart succumbed to the effects of severe scurvy and was carried for the final five weeks of the journey on a stretcher slung between two horses. When he arrived back in Adelaide in December, he was met by enthusiastic crowds. The party's achievements were celebrated with a procession through packed streets on 21 January 1863. His health permanently affected, Stuart returned to England in the following year. John McDouall Stuart died on 5 June 1866 and was buried in Kensal Green Cemetery, London.

A public collection for a statue in Adelaide to honour Stuart began in 1896. In mid 1901 the project was taken up by the Caledonian Society, and the state government pledged to match the funds raised. A design submitted by William Maxwell of Adelaide was selected. After lengthy attempts to find a suitable block of South Australian stone, marble was imported from Carrara, Italy. Maxwell died in 1903, so his design was executed in Adelaide over six months by several men, led by James White of Sydney. Master builder Walter Charles Torode oversaw the assembly of the statue on its base of New South Wales trachyte, topped by a bronze frieze featuring a Scottish Thistle. The pedestal features a globe with Australia in polished relief showing Stuart’s route.

The statue was unveiled in Victoria Square on 4 June 1904 amid controversy. None of the four surviving members of Stuart’s final expedition attended the ceremony. They had written to the Caledonian Society protesting against the selection of Maxwell’s design, arguing that it bore no resemblance to the man, that it represented Stuart ‘from a mere artistic point’. They wrote: ‘for the public and posterity we would like Stuart to appear as the typical bushman he undoubtedly was’. The society was also criticised for stubbornly sticking to a date for the unveiling that clashed with the commitments of the governor, lieutenant-governor, and the premier and his ministry.

The revealed statue and base confirmed their original concerns. Among the concerns were that the names of the nine members of Stuart’s party did not appear on the front of the memorial, but were relegated to the side. Regardless of the furore, or perhaps partly because of it, the memorial proved popular, as numerous members of the public came to view it on the days that followed the unveiling.

A remembrance ceremony is held by the John McDouall Stuart Society at the statue each year. The society was formed in 1964 by descendants of Stuart, his companions and his sponsors, John and James Chambers. 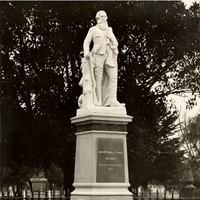 Courtesy City of Adelaide Archives. HPO442. Not to be reproduced without permission. 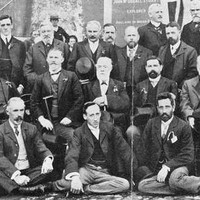 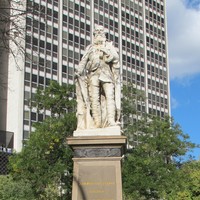 Associate of:
The Great Stuart Demonstration