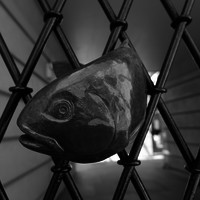 Fish for the Slate Pool Walkway

‘As I see it, life is an effort to grip before they slip through one's fingers and slide into oblivion, the startling, the ghastly or the blindingly exquisite fish of the imagination before they whip away on the endless current and are lost for ever in oblivion's black ocean’. Mervyn Peake

Within Catherine Truman’s work, Fish for the Slate Pool Walkway, the tentative nature of life is captured brilliantly from the depths of Truman’s imagination.

The installation Fish for the Slate Pool Walkway  was created by Adelaide-based artist Catherine Truman between 1993 and 1995, courtesy of a South Australian Government Grant. The work is located at the Art Gallery of South Australia, between the gallery courtyard and the entrance to the Mounted Police Barracks. This art work is commonly referred to as the ‘fish gates’.

Born in Adelaide in 1957, Truman undertook an Associate Diploma in Jewellery and Metalsmithing between 1981 and 1985 and also studied at the School of Design, which is now part of the University of South Australia’s City West campus. In 1985, along with fellow artists Sue Lorraine and Anne Brennan, Truman established the Gray Street Workshop in Norwood (now in Sydney place Adelaide), which is dedicated to jewellery and object making.

Melinda Rackham describes Catherine Truman as ‘medium agnostic’, due to her practice of crossing between the use of multiple media such as carved lime wood, jewellery, installation and public sculpture. In this work, Truman’s hand carved wax models were created then molded by casting expert Helen Printer. Bronze was the chosen material of choice for the fish, due to its durability. The fish were cast at Meridian foundry in Melbourne. The gates themselves were designed by Catherine and manufactured by artist Greg Healey, who is an artist and metal worker at George Street Studios in Thebarton. The gallery holds an extra fish in its stored collection.

Truman’s passion for sea life comes from her time spent as a child at Glenelg beach, near to her family home. Truman indicates her love of crossing the boundaries between art and science, in a search for the unknown and the unseen. This has led her to a residency at the Microscopy suite at Flinders University and also a collaboration with neuroscientist and poet Ian Gibbins in anatomy focused projects.

Motivation for this work

The fish that appear within the Slate Pool Walkway have been linked to the connection between our inner existence and the tribulations we encounter as we journey through life, the gates being representational of the challenges we face.  The Fish motif became a presence in Truman’s early practice and has been connected to feminist discourse that explores the concepts of age and beauty.  However, Truman indicates that the message transgresses that dialogue and instead expands to a meaning that considers the ‘life concealed under the surface- a metaphor for the life within’.

Other Public Works by this Artist

Catherin Truman also created the giant bronze leaves titled A Way of Seeing, which are featured on the facade of the David Jones building situated on North Terrace. Helen Printer developed the casting mold for this work also. 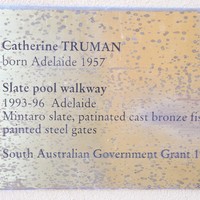 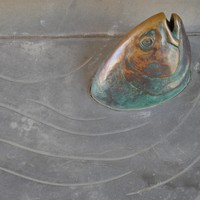 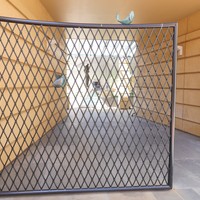 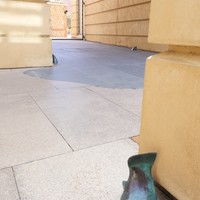