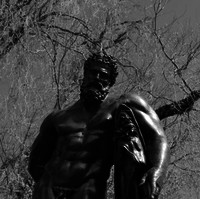 The Farnese Hercules statue was unveiled in Victoria Square.
1930

Farnese Hercules was moved to the Laffer Rose Gardens, within Pennington Gardens, after renovations. 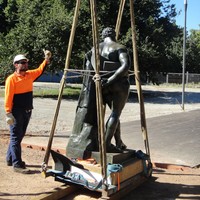 Hercules was removed in 2012 as part of the Adelaide Oval redevelopment. He was taken to Artlab Australia for conservation work and relocated at the meeting point of several footpaths just off King William Street.

One of three statues given to Adelaide by WA Horn, Hercules was unveiled in October 1892 in Victoria Square. In 1902 letters from 'Sense' and 'Purity' about the nakedness of the statue evoked a lively correspondence. One wit suggested a kilt and others mocked their 'excruciatingly ridiculous' views. Some agreed with the critics. In 1925 there was a further complaint about the indecency of Hercules (Advertiser 14 January). The Bunyip commented in 1930 how very offensive the statue was to some people and wondered what the Council would do now that the trees in Victoria Square were being cut away and he could be clearly seen. It regarded his offence as being against art rather than decency, describing him as 'grossly misshapen' and 'dwarfish':

The Fellow must have been a wharf labourer, trained in shifting grand pianos and cranes on his back by the look of him. (The Bunyip 20 June 1930)

The paper suggested moving him to North Terrace and putting him between Robert Burns and Venus. Instead the Council moved him to Pennington Gardens, explaining:

He is considered out of place in the remodelled square that is taking shape. (Observer 26 June 1930)

'Why not move it a few steps further and drop it in the Torrens' commented The Mail (5 July 1930). He continued to cause trouble. In 1940 vandals pulled him from his pedestal and the cost of repairs was 15 pounds.

In 2000 Hercules was in the news again. The Deputy Lord Mayor (Michael Harbison) thought Adelaide had matured enough for Hercules to return to Victoria Square. He was wrong. Another Councillor, Anne Moran, argued that the statue's small genitalia might cause comment and ridicule. Harbison wondered whether if Hercules' proportions were 'less than adequate' that might comfort all the men in Adelaide. In 2016 The Advertiser returned to the fray - Hercules should not be hidden away but should be in a prominent position. By this time the statue was back in Pennington Gardens, and was indeed given greater prominence, as a small shift to accommodate the Adelaide Oval redevelopments saw Hercules positioned in 2015 at the intersection of footpaths in the newly landscaped garden.

The statue in Adelaide is a copy of the Farnese Hercules which was excavated in Naples in the sixteenth century. The excavated statue had been signed by the Athenian sculptor Glykon who was a copyist in Roman times. It was found to be a copy of a statue constructed in the fourth century BC by Lyssipus the Greek sculptor. The statue is typical of an ancient Greek style evident in the bulging muscles and unnatural proportions of the body. Classical Greek sculpture represented perfection and often incorporated intense emotion. The Farnese Hercules in Adelaide is an example of this; he is tired from his struggles yet displays his flawless physique by not wearing any clothes. William Austin Horn’s intention for donating the collection of statues was to enlighten Adelaide with artwork from the distant past. Horn was associated with the Broken Hill Proprietary Company and ‘Wairoa’ in the Adelaide Hills, and likely came across the statue during his travels in Europe. The Hercules statue is made of bronze and is located on top of a pedestal in Pennington Gardens, Adelaide. 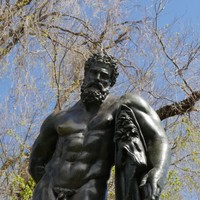 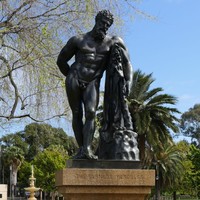 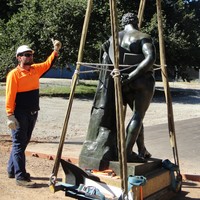 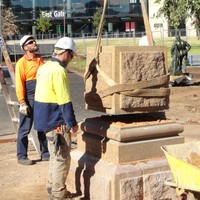 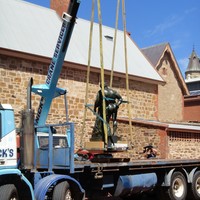