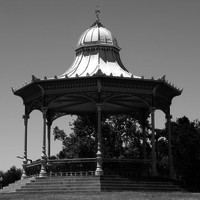 The idea of a rotunda by the River Torrens was suggested in the early 1880s as part of a plan by the Adelaide City Council to improve the river and its surrounds. The council proposed to dam the river, create a lake and construct a public esplanade to the west of City Bridge.

Wealthy businessman, pastoralist, parliamentarian and philanthropist Sir Thomas Elder heard of these plans when he was holidaying in the United Kingdom. He was aware that the mayor and the council had been unsuccessful in their attempts to raise funds for a rotunda to add to the public’s enjoyment of the lake side. Elder wrote to the council offering to donate one. As the Advertiser reported on 23 August 1881,

… he thought the occasion might be made a fitting one for presenting the council with a rotunda or band stand. He stated that he had ordered a rotunda to be made and sent to the colony, and he asked the council to accept it as a mark of his appreciation of the improvements they had carried out and his interest in the city.

The octagonal rotunda was made at Macfarlane’s Saracen Foundry in Glasgow and shipped from London on 14 February 1882. It was constructed of decorative wrought iron with a zinc roof. On arrival the rotunda was painted bronze, grey and blue.

The council secured a small reserve near the river and the land was prepared to receive the rotunda. A mound was raised on which it would sit, to make it clearly visible from King William Street. A foundation with arches and granite steps was laid. The depth of the foundations from the base to floor level was 5.5m, providing space underneath for storing musical equipment and for band practices. Elder contributed £100 to the site preparation.

The Elder Rotunda was officially opened at 8pm on 28 November 1882, more than a year after the weir and lake were completed. At least 3000 people attended the event on a fine Adelaide spring evening. A ‘Rotunda March’, dedicated to Sir Thomas Elder, was composed for the occasion by band leader Mr W Worlsey and played by the Military Band. The Adelaide Liedertafel headed a procession of boats on the lake and ‘favoured the public with some admirably sung glees’. The boats were lit with lanterns. Supper for invited guests was provided afterwards at Long’s boat shed, across the river. In his speech to launch the rotunda, retiring Mayor Edwin Smith announced that it would be the venue for regular music performances for the enjoyment of the community.

In 1982 the centenary of the rotunda was celebrated. Brass and jazz bands played. There was a row past of Torrens boats and free pony rides for children. The Adelaide Liedertafel sang songs from the opening night a century before. 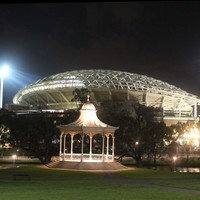 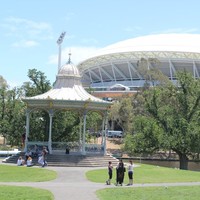 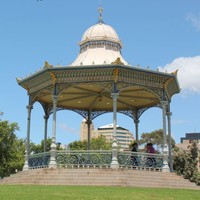 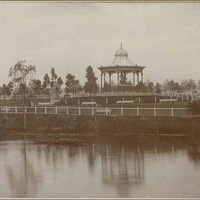 Image courtesy of the State Library of South Australia SLSA: B 9274, Public Domain. 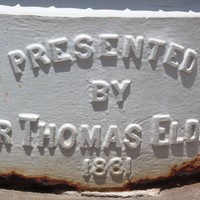 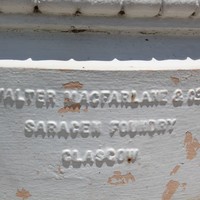 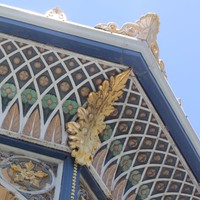