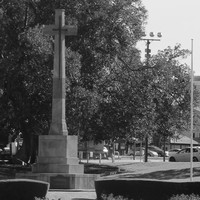 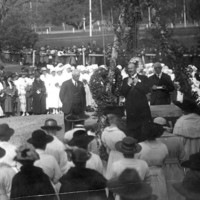 Laying of the foundation stone

The Governor, Sir Archibald Weigall, officiated and women laid violets at the ceremony. 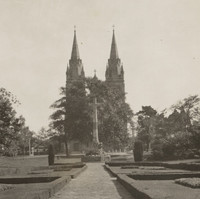 Brigadier General Leane led the unveiling and thousands of people were reported to have attended the ceremony. 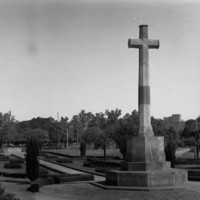 Cross of Sacrifice in the Women's Memorial Gardens
1923

The Stone of Remembrance was added, and work on the Women's Memorial Garden completed, in the year after the official unveiling of the Cross of Sacrifice.

The Cross of Sacrifice, part of the Women's War Memorial, stands opposite St Peter's Cathedral in the Pennington Gardens. The memorial was first unveiled in 1922, after a subscription started in 1919 by the Women's War Memorial Committee. Funds for the Cross were contributed entirely by 'the women of South Australia'. It is a replica of the Cross of Sacrifice, designed by Sir Reginald Bloomfield and erected in Commonwealth war cemeteries consisting of forty graves or more.

Plans for a commemorative site

Miss Ethel Wyatt, Joint Hon. Secretary Trench Comforts Fund, League of Loyal Women, is credited with the idea for a memorial to honour the South Australian men who died in the First World War, then referred to as the 'Great War'. The Lady Mayoress, Mrs Elizabeth Glover, called a public meeting on 12 March 1919 to set up the Women's War Memorial Committee with the aim of inspiring as many women in South Australia as possible to donate. They eventually raised over £3 000 from around 10 000 subscribers.

The Governor, Sir Archibald Weigall, officially laid the foundation stone on 4 August 1920 and women attending the ceremony laid violets on the stone. The Adelaide Observer reporting on the event wrote:

South Australia's patriotic women have fittingly crowned their war work. Ten thousand of them contributed to the creation of a memorial to the men who died on the fields of war to save their country. That memorial has taken the form of a cross, similar to the war crosses which stand sentinel over the graves of Australian soldiers in France and Belgium. (The Observer, 7 August 1920)

It was almost another two years before the Memorial was finished.

The cross was officially unveiled on Anzac Day 1922. Hundreds of women gathered at the Soldiers' War Memorial (now called the South African War Memorial) and marched from there to the ceremony at the Cross of Sacrifice. During this procession the Salvation Army Band played 'inspiriting music'. The annual servicemen's parade also finished at the new memorial; there was a religious service with representatives of every Christian denomination, and Brigadier General Leane led the unveiling. Thousands of people were reported to have attended the ceremony. Hymns were sung, the Last Post and National Anthem played, and the activities concluded with the attending women laying flowers at the base of the memorial.

Following the ceremony the Chronicle published a glowing account of the construction and unveiling, describing the memorial:

Erected in a quiet corner of the beautiful gardens which stretch from the Torrens northward to Pennington-terrace, and just south of that thoroughfare, on the eastern side of King William-road, is a magnificent memorial, the outward and visible evidence of the love enshrined in the heart of every mother, wife, sister, and sweetheart for those who fell in freedom's cause. (The Chronicle, 29 April 1929)

The Cross of Sacrifice stands at one end of a long, avenue-like garden, with a Stone of Remembrance (added in 1923) positioned at the opposite end. Together with the Garden of Memory, also in the shape of a cross, they form what is referred to as the Women's War Memorial.

The site was chosen for the space it allowed, with the idea of creating an atmosphere of 'peace and reverence'. This was after Herbert Baker, an architect who helped to plan Commonwealth cemeteries in France, advised the committee that a site in front of the Art Gallery was not suitable.

The Cross of Sacrifice was designed by architect Sir Alfred Wells and built by Walter Torode of Unley. It is made of Tea Tree Gully stone sourced from the St Peter's College quarry.

The original inscription for the Cross of Sacrifice  was replaced in 1965 by a plaque which reads:

TO THE GLORY OF GOD

AND THE IMPERISHABLE MEMORY

OF THE MEN WHO GAVE THEIR LIVES

THE TRIBUTE OF THE WOMEN OF SOUTH AUSTRALIA

THIS PLAQUE REPLACES THE ORIGINAL INSCRIPTION

ON THIS CROSS OF SACRIFICE

AND IS DEDICATED TO THE MEMORY OF ALL

WHO PAID THE SUPREME SACRIFICE

IN TIME OF WAR.

"THEIR NAME LIVETH FOR EVERMORE"

Laying of the Foundation Stone 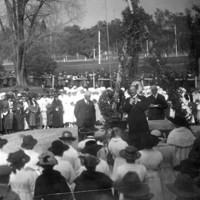 Laying of the foundation stone of the Women's War Memorial, 4 August 1920. 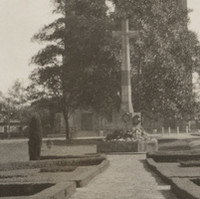 View of the Women's War Memorial toward the Cross of Sacrifice 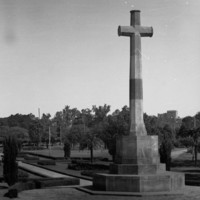 View of the Cross of Sacrifice, looking towards Women's War Memorial gardens, 1930 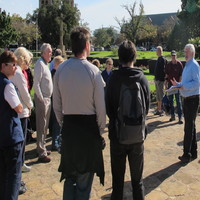 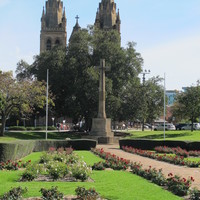 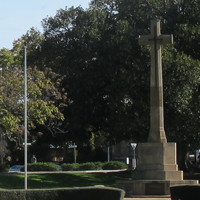 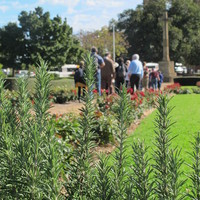