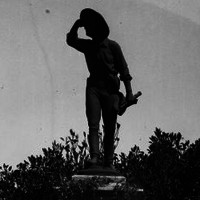 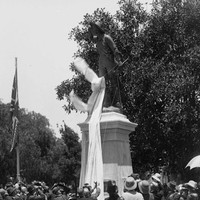 The statue of explorer Captain Charles Napier Sturt (1795–1869) was described as ‘the most alive’ statue in Adelaide when it was unveiled in December 1916. It stands in marked contrast to the staid monuments to Queen Victoria, Charles Cameron Kingston and John McDouall Stuart that also occupy Victoria Square, Adelaide.

The life-size bronze statue of Sturt is dressed not in finery, but in the working clothes of an outback explorer. He wears working pants and worn knee boots. The sleeves of his open-necked shirt are rolled up to the elbow and his head is protected by a broad brimmed hat. Sturt leans forward, shielding his eyes from the sun with a raised right hand as he peers into the distance. He carries his tools of trade: a compass on his belt, a telescope and crumpled map in his left hand, and a water bottle slung over his shoulder.

Charles Sturt and his explorations

Captain Sturt was a soldier, explorer and public servant. He explored and documented the Murrumbidgee-Murray-Darling river system. Sturt is especially remembered as the first European to chart the Murray. He also led several expeditions to the interior of Australia starting from Sydney and Adelaide.

Sturt was born in Bengal, then part of British India, and educated in England. On completion of his schooling he served abroad in the British Army. In 1825 he was promoted to Captain and two years later sent with a detachment of his regiment to escort convicts to New South Wales.

Charles Sturt soon developed a keen interest in the country and began exploring from Sydney. He was drawn to the rivers that flowed across New South Wales and aimed to find the inland sea it was assumed they drained into. His first expedition traced the Macquarie, Bogan and Castlereagh Rivers in 1828-29. He made the European discovery of the Darling River, which he named after New South Wales Governor, Sir Ralph Darling.

In November 1829 Sturt and his exploration party left Sydney to investigate the Lachlan-Murrumbidgee river system. They travelled down the Murrumbidgee River, reaching the confluence of a larger river, which Sturt named after Sir George Murray, British Secretary of State for the Colonies. They then continued down the Murray to where the Darling entered, thus establishing that western flowing rivers ended in the Murray. In February 1830 (before the colonisation of South Australia) Sturt’s party reached a large lake he named Lake Alexandrina. A few days later they reached the sea and concluded that the mouth of the Murray was unsuitable as a port. It took three months for the team to row back up the Murray in the heat of summer, with inadequate supplies. They were rescued from starvation, but Sturt was blind for some time and his health permanently affected.

Changing fortunes prompted Sturt to overland cattle from Sydney to Adelaide in 1838. The following year he moved to Adelaide and settled at Grange, on the coast. He served in the positions of Surveyor-General and Registrar-General for the colony. Sturt still believed that an inland sea lay at the heart of the continent and before long he proposed a major expedition to search for it. Sturt also wanted to be the first European explorer to reach the centre of Australia.

On 10 August 1844 people gathered in Adelaide to farewell Sturt and his expedition of 15 men, six drays, a boat and 200 sheep. The men included John McDouall Stuart, who would later achieve renown as an explorer in his own right. Sturt launched their exploration of the interior from Moorundie on the Murray, home of Edward John Eyre. They first explored areas of New South Wales around the Darling River and the Barrier Range. Summer heat and drought stranded them at Depot Glen near Tibooburra between 27 January and 16 July 1845, during which time James Poole died of scurvy. After rains, they journeyed across Sturt’s Stony Desert and into the Simpson Desert. The party was turned back by sand dunes, unknowingly less then 200km from the centre of the continent. Sturt was forced to give up the idea of an inland sea. Sturt arrived back in Adelaide on 19 January 1846, a few days ahead of his party.

In 1847 Sturt was presented with a gold medal by the Royal Geographical Society in England. Back in South Australia, he was appointed Colonial Secretary, but resigned in 1851 due to deteriorating health. He left South Australia in 1853 and died in England in 1869.

The idea of a memorial to Captain Sturt was put forward at the start of the twentieth century when the new State of South Australia was busy erecting monuments to significant figures in its colonial past. Sturt's statue followed monuments to John McDouall Stuart and Colonel William Light.

At the unveiling of Light’s statue in November 1906, an organising committee member, Robert Kyffin Thomas, proposed Sturt as a person deserving of a memorial. Other committee members, including former Mayor Sir Edwin Smith, agreed. The balance of funds remaining from Light’s statue was forwarded to the Lord Mayor to be kept in trust for a memorial to Sturt. A public meeting in Adelaide Town Hall on 28 February 1907 began a decade of fundraising. Eventually the Price Government provided the necessary financial support and the Adelaide City Council allocated space in Victoria Square. A sub-committee in London, including Sturt’s daughter Charlotte, selected a sculptor to undertake the work.

The statue’s designer was English sculptor Captain Adrian Jones (1845-1938) who was also a career soldier, veterinarian and painter. He had already produced the horse and rider of the South African War Memorial on the corner of North Terrace and King William Street (unveiled 1904). This much admired work reflected his ability to sculpt people and animals in motion. The commissioning of Jones to design Sturt’s statue was influenced by the success of this earlier piece.

The statue was cast at the Frome foundry in Somerset, England. The bronze panels were made in South Australia. The base and pedestal of Murray Bridge granite and Angaston marble were carved by monumental masons GE Morgan of Adelaide.

The unveiling and the inscriptions

Sturt’s statue was completed in 1916 and shipped to South Australia free of charge by P&O Co. It arrived in July 1916 with a note from South Australia's Agent-General in London describing it as ‘the most “alive” statue in Adelaide’.

The statue was erected in the northwest of Victoria Square. In newspaper reports of its unveiling on 21 December 1916 Governor Sir Henry Galway described Sturt as 'a man who was not only a great citizen and an eminent public servant, but also proved a soldier, a born leader, an intrepid explorer, and a gentleman without fear and without reproach'.

John Lewis MLC, whose father had been a member of Sturt’s inland party, gave an account of the expedition of 1844-46. Lewis chaired the statue committee and was president of the Royal Geographical Society of South Australia. Among the many present at the unveiling were Premier Crawford Vaughan, Mayor Isaac Isaacs, Sir Edwin Smith, local and state politicians, senior public servants and military officials. The Police Band accompanied proceedings.

Four bronze panels record details of Sturt and his three main explorations, and the members of his South Australian expeditions (1829-30 and 1844-46).

Other memorials to Sturt 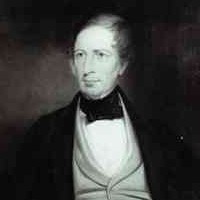 Image courtesy of the State Library of South Australia SLSA: B 70378/2, Public Domain 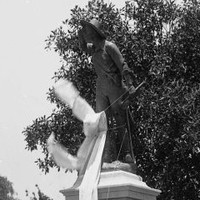 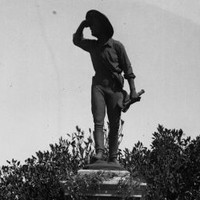 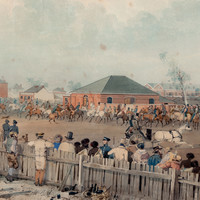