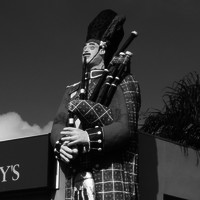 The Big Scotsman has adorned Scotty's Motel since 1963. This makes Scotty the first of Australia's Big Things (still standing) to be built, before the Big Banana, which was finished in 1964.

Created by  Paul Kelly, who went on to build Larry the Lobster in Kingston, Scotty is constructed with a fibreglass outer over a steel frame filled with polystyrene foam. Scotty stands five metres tall at the intersection of Main North Road and Nottage Terrace, a landmark for many travel weary people signalling their immenent arrival in the city.

Historian Dr Amy Clarke, University of the Sunshine Coast, described the 1980s as the 'peak' era for the popularity of 'Big Things' in Australia. Clarke defines Big Things as "Super-sized structures that mimic or quote smaller 'real world' things". She describes their rise in popularity in the United States in the 1920s as "Largely as a result of the introduction of the motorcar". Australia, another popular road trip destination, now has over 200 Big Things. While popular these structures can also be expensive to maintain. Larry the Lobster, in Kingston, South Australia, has been the subject of multiple fundraisers in an attempt to save the landmark. Scotty has been re-painted many times, it costs thousands of dollars to keep him in top condition.

In 2021 Yanka Shopov, the Scotsman’s owner, discussed options for the relocation or gifting to the state of the Big Scotsman should the building be redeveloped under changed zoning laws. 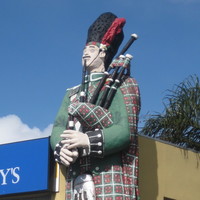 Clarke, Amy, 'Australia’s ‘big’ problem – what to do with our ageing super-sized statues?' The Conversation, 19 September 2017