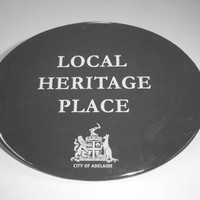 The year 1986 marked the 150th anniversary of the colonisation of South Australia. As part of that year’s celebrations, the Jubilee 150 Board created a Jubilee 150 Walk of 150 bronze plaques set in the northern footpath of North Terrace from King William Street to Pulteney Street. These plaques honour a selection of 170 people who made a significant contribution to the community or gained national and international recognition. The J150 plaques were arranged in alphabetical order, largely, along the northern pathway of North Terrace.

Early in the twenty-first century the Adelaide City Council, in association with private individuals and organisations, installed some plaques on the same stretch of footpath. All but one of these bear the council’s crest and they may not be located in alphabetical sequence.

In 1998, after a trial period, the council began a heritage plaque program for places with state or local heritage listing within the city. The ongoing program has seen more than 550 plaques installed, many being on residences in south-west and south-east Adelaide and across North Adelaide. The blue and white enamelled plaques come in two different designs. Some 320 large plaques identify the site and present a brief story of the building and about 240 smaller plaques of a similar appearance are on local heritage places and recognise the property’s heritage listing.

The council followed this with a program to recognise early businesses so as to acknowledge the role of commercial development in the life and economy of the city. The first plaque was placed on the Dog & Duck Hotel (the site of the Royal Admiral Hotel which opened on 5 March 1838) in early 2010. Other sites include the World’s End Hotel (the former Royal Oak Hotel) and the former West End Brewery in Hindley Street and the former Hutt Street Private Hospital. While the business the plaque is recognising may not still operate, the plaque is placed on the site of the initial premises or on the site of the most well known premises regardless of whether the building is still standing. 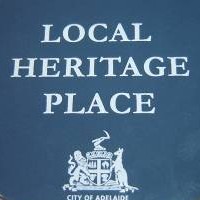 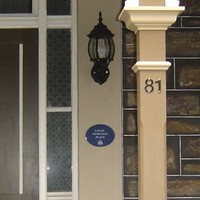 A Local Heritage Place plaque on a private dwelling, Adelaide 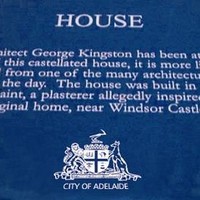 An example of a worded Heritage Place plaque 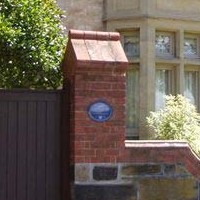 A Heritage Place plaque outside a private dwelling, North Adelaide 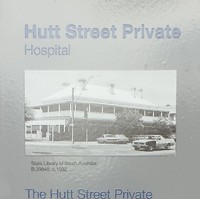