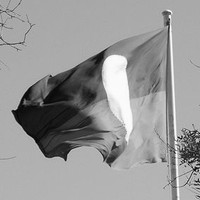 The Aboriginal and Torres Strait Islander Flags were proclaimed official flags on 14 July 1995.
1997

Thomas recognised as holder of copyright

The Federal Court recognised Harold Thomas as holder of copyright in the Aboriginal Flag in the case of Thomas v Brown and Tennant, handed down on 9 April 1997.
2001

The Aboriginal Flag's 30th anniversary was celebrated in Adelaide on 8 July 2001.

The Aboriginal flag flying high over Tarntanyangga/Victoria Square, Adelaide commemorates that it was at this site that the flag was first flown, on National Aborigines Day, Friday 12 July, 1971.

The flag was designed by Harold Thomas. The black represents the Aboriginal people of Australia; the red represents the red earth, red ochre and spiritual relation to land; and the yellow the sun, the giver of life and protector.

By mid 1972 the flag was being flown at Aboriginal tent embassies in Adelaide and Canberra, and became a symbol of unity, pride and national identity for Aboriginal people as the struggle for land rights and recognition gained momentum.

Harold Thomas, a Luritja man, was born in Alice Springs in the late 1940s. Part of the Stolen Generations, Thomas was removed from his family and sent to school in Adelaide. He won a scholarship to attend the South Australian School of Art and became the first Aboriginal person to graduate from an art school. Thomas was then employed at the South Australian Museum, another first. He was inspired by his work with the museum’s collection of Aboriginal art and artefacts. Thomas said of the flag: ‘When I look carefully at what the Aboriginal flag looks like, it comes from the simplicity and power of Aboriginal art itself. Simple colour, choice of colour, and a simple design. It's powerful, and the colours are important’.

The 30th anniversary of the Aboriginal flag was celebrated during NAIDOC (National Aboriginal and Islander Day Observance Committee) Week in 2001. Thousands of people participated in a ceremony in which the flag was carried from Parliament House to Tarntanyangga/Victoria Square, where it was raised on a large flagpole by Thomas. The following year the Adelaide City Council resolved that the flag should fly permanently in Tarntanyangga/Victoria Square.

The Aboriginal flag endures as a symbol of Aboriginal pride, rights and identity. 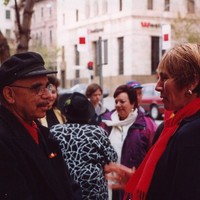 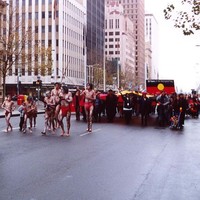 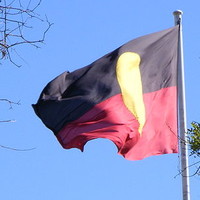