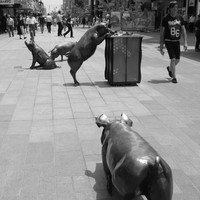 From the look of these four life-size bronze pigs, they are having a great day out in Rundle Mall. One has his snout in a rubbish bin bronzed-capped with a crumpled milk carton, orange peel, a half-eaten banana, apple core and a left-over sandwich. Another happily sits with its very large bottom spread on the pavement; while still another comes running to join the fun. They all glow from the loving hugs and pats of children and passers-by.

The positive community response to the pigs after their launch by Lord Mayor Dr Jane Lomax-Smith on 3 July 1999 led the Adelaide City Council and the Advertiser newspaper to conduct a competition to name them. A plaque by each animal states its name and the person who named it: Sarah Chan called the standing pig ‘Oliver’; Sam Andt named the happy pig ‘Truffles’; Dorothy Arnold chose ‘Augusta’ for the sniffing pig; and Jemmy Bridges called the sitting pig ‘Horatio’.

The sculpture was instigated by the Adelaide City Council as part of the final stage of an upgrade of Rundle Mall in the late 1990s. A national sculpture competition resulted in 126 entries being considered by an independent selection panel which included representatives of the Art Gallery of South Australia, the upgrade project’s architect, the council, a Rundle Mall trader and the arts sector. The council chose the proposal by Marguerite Derricourt from the group of finalists identified by the panel. Works by the other finalists were to be placed in different city locations.

South African born Marguerite Derricourt migrated to Sydney, Australia. She demonstrates an affinity with animals in her numerous public artworks. Asked why she decided to sculpt a group of pigs, Derricourt commented:

There is a long history of animal figures in urban sculpture which reflect their importance to our society. I chose to sculpt pigs because I was captivated by their shapes and rounded forms, especially when created in a beautiful and enduring material like bronze. I really want people to touch them and interact with them. (Adelaide City Archives, Envelope, ‘Sculptures’ - ‘The Pigs In Rundle Mall’)

Derricourt was also partly inspired by the famous bronze wild boar of Florence, ‘Il Porcellino’. This symbol of the city was installed in 1612, and his snout has similarly been rubbed to a shine by visitors.

In Adelaide there was some initial concern about the potential health risks posed by children riding on the pigs, and also the protruding tail of one of them. A modification to Oliver’s tail removed that particular hazard. But parents and children alike continue to enjoy sitting on and touching the pigs on their day out. 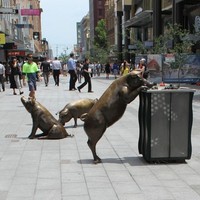 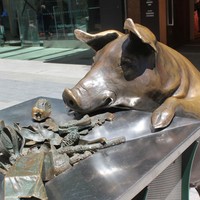