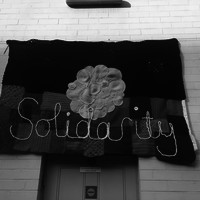 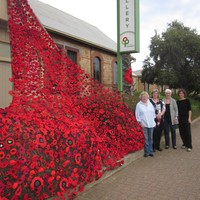 The 100th anniversary of the Galipoli campaign and the First World War saw numerous groups around Australia knit and crochet poppies in remembrance.

Knitting and crochet have long been meaningful social actions; altruistic community acts that can unite people for a cause, from knitting to support troops during the Crimean War in the 1850s, to knitting teddies for charities and hospitals in the 21st century.  Crafters also crochet and knit to challenge social norms, to make political protests or to make feminist statements.  Yarn bombing, also known as ‘guerrilla knitting’ or ‘knitfitti’ (knitted graffiti), is where brightly coloured pieces are used to adorn street furniture, statues, buildings and even vehicles, with or without official permission. It is thought to have originated in Europe in about 2004, and rapidly spread to the United States and Australia as a powerful way to beautify the urban environment and to reclaim public space for craft, protest and art.

The origins of yarn bombing in South Australia are uncertain, but seem to date from around 2008 or 2009, when awareness of other radical art and craft activities such as graffiti and guerrilla cross-stitch intersected with crafters’ desire to create open-access works and to share skills and have fun with friends. In the early days the movement was very underground, and enjoyed no official sanction from councils, landowners or traders. Some artists worked alone, often under cover of darkness, to install solo pieces. Others, such as Radical Craft Adelaide, worked in groups and held ‘crafternoons’ to co-ordinate yarn bombings to ‘tag’ Adelaide landmarks like graffiti artists, again often after dark.

Social media and the Internet have had a powerful role in the spread and popularity of yarn bombing, showcasing the possibilities of yarn bombing in viral photos and videos, and bringing like-minded people together to work on installations. By 2011, when International Yarn Bombing Day was established by a crafter in the US, yarn bombing had become a trending and trendy phenomenon. In Adelaide, growing public awareness and interest led to a wave of officially sanctioned projects, as businesses, charities, councils and artists began to work together. The 2011 Come Out Festival featured The Knitted City, a multi-artist ‘ephemeral public art installation’ performed over three city locations, while in 2012 Adelaide City Council commissioned a curated piece for the Victoria Square Christmas celebrations. In 2013 the Cora Barclay Centre in North Adelaide hosted a yarn bombing at their offices to celebrate their fundraising Loud Shirt Day, and in 2015 many groups developed installations using yarn-made poppies, to mark the 100th anniversary of the ANZAC landings at Gallipoli.  Also in 2015 History SA and friends gathered hundreds of knitted and crochet violets to celebrate 100 years since the first Violet Day, while community groups including the Mt Pleasant District History Room included knitted and crocheted violet installations in their commemorations. The Migration Museum held an exhibition on knitting and crochet in which many crafters helped yarn bomb Settlement Square with over one hundred little suitcases.

These days yarn bombing can take many different forms, from radical, small-scale pieces to large works in the public sphere that are collaborative community art projects, often made possible by dozens of volunteers. The basic themes that attract and motivate yarn bombers remain constant: the desire to reclaim public space, showcase skills, share a love of yarn, bridge the craft/art barrier and make visible statements about the personal, the political and the social. From your Nanna’s crochet to school children using ‘tomboy’ knitters, yarn bombing is alive and kicking in Adelaide.

With thanks to the yarn bombers of Adelaide who shared their knowledge and stories. 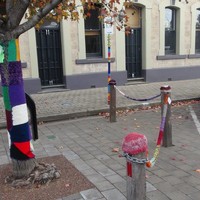 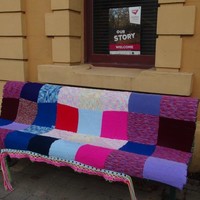 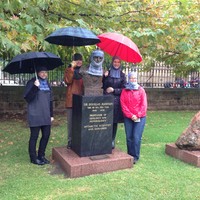 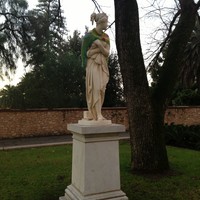 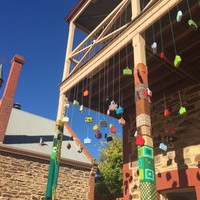 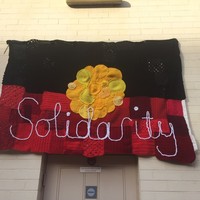 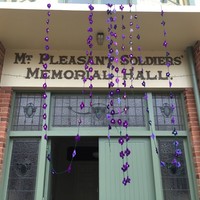 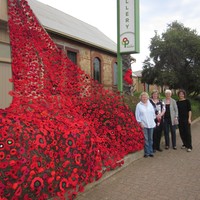