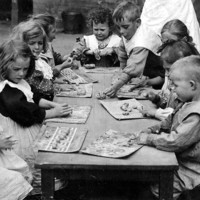 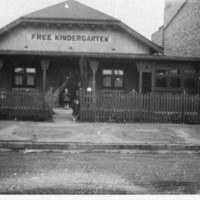 The Franklin Street Free Kindergarten opened at a cottage in the city’s poorest area.
1907

Kindergarten conference is held in Adelaide

This conference assisted in prompting increased national cooperation with kindergartens.
1940

The Commonwealth established model Lady Gowrie Child Centres in each state, with Adelaide's located in Thebarton.
1975

With 300 kindergartens, the union became a statutory body. The state government took it over in 1985, emphasising child-care.

Based on the philosophy and understanding of child development of the German educator and philosopher Friedrich Froebel, kindergartens in South Australia began for both educational and humanitarian reasons.

The earliest Adelaide kindergartens were for underprivileged children. In 1905 Catherine Helen Spence and Anglican clergyman Bertram Hawker saw the striking transformation of former street urchins at Sydney’s Woolloomooloo kindergarten. Hawker arranged for Frances Newton, the Chicago-trained director of the Sydney Kindergarten Training College and her gifted young graduate Lillian de Lissa to give demonstrations in Adelaide. Using Froebel’s ‘Gifts and Occupations’ (teaching apparatus) they taught local children, comfortable on child-size chairs at small tables, before engrossed educationists and interested citizens. A public meeting at the University of Adelaide initiated the Kindergarten Union of South Australia, which was managed by volunteer committees and funded by philanthropists, including Robert Barr Smith, William Mitchell and Peter Waite, donations, fundraising and a modest government grant.

With 300 kindergartens, in 1975 the union became a statutory body. The state government took it over in 1985, emphasising child-care. After many vicissitudes, the Kindergarten Teachers College became the de Lissa Institute of Early Childhood and Family Studies within the University of South Australia. By century’s end the enriching experience of kindergarten was an accepted part of South Australian childhood. 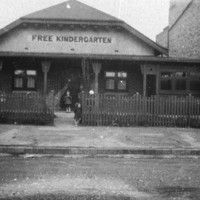 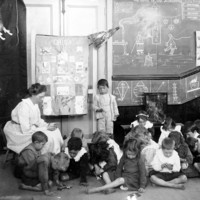 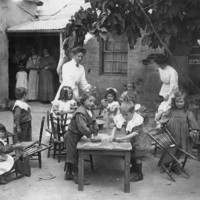 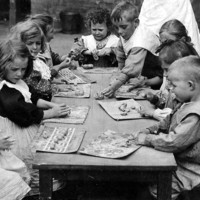 Hi Claire, the sources for this article are listed above, click on sources next to the comments section. One of those texts will probably lead you further. The policy debate in parliament will be in the Hansard records, and you may also find contemporary coverage searching newspapers at the State Library or online through Trove http://trove.nla.gov.au/ Another place to look is Education Department records, these vary state to state, for South Australian records State Records is the best starting point and they will be able to direct you further http://www.archives.sa.gov.au/ Best of luck in your research.

Where or how can I find out when the policy was introduced that gave Aboriginal children early entry to kindergarten - ie eligible to start at 3 years of age instead of 4 years of age?