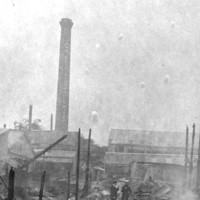 The second 'Great Fire' to strike Port Adelaide begins in an ironmonger's workshop on North Parade. It destroys approximately half of Port Adelaide and nearly all of its shopping district
1885

Since its establishment in 1837, Port Adelaide has endured several catastrophic fires that have resulted in loss of life and property. Three nineteenth-century blazes in particular, in 1847, 1857 and 1885, were especially devastating, and are known collectively as the Port’s ‘Great Fires’. As a direct consequence of these terrifying and costly events, Port Adelaide created an efficient and well-trained fire brigade, and acquired equipment necessary to effectively combat blazes when they occurred. The Port’s civic leaders also encouraged the development of legislation specifically intended to reduce the risk of fire and standardise outfitting and organisation of volunteer fire brigades.

On 22 January 1847, a fire started inside a sail loft belonging to Edward Bayly, a ship’s chandler and sail-maker. The array of combustible materials within the building, combined with a fresh south-west wind, accelerated the blaze and caused it to traverse Bayly’s yard and ignite his house and adjoining shop. Shortly thereafter, flames spread to the Port Tavern. The tavern’s owner James Wakeling was only able to save two casks of spirits and his personal papers before the premises were consumed. Among items lost to the ‘fury of the flames’ was the tavern’s till, which contained several bank notes and an array of gold, silver and copper coins. A coach house and stables belonging to the Port Tavern were the next to succumb, resulting in the deaths of two horses. Wakeling apparently took these losses in stride, and within a year would open the British Hotel on the same site.

The fire spread to six additional properties and ultimately consumed most of the western half of the New Port Township before burning itself out. The Post Office, Police Barracks, and several sheds and warehouses on Government Wharf escaped destruction due to the combined efforts of Port Adelaide’s citizenry and police force, as well as the crews of ships moored in the Port River. Volunteers placed wet blankets on each building’s roof, formed bucket brigades, and went to great lengths to extinguish airborne embers before they could land on and ignite combustible structures. The vessel David Malcolm, moored alongside Government Wharf when the fire started, was hastily warped into the middle of the river and narrowly avoided being set ablaze. Because a fire brigade did not exist in either Port Adelaide or Adelaide in 1847, the Port’s police force bore the brunt of directing firefighting efforts. Reinforcements comprising mounted police and soldiers arrived from Adelaide with a hand-operated ‘fire engine’, but the fire had largely subsided by the time it was put to use.

Although a massive outpouring of assistance emerged to quell the blaze, contemporary newspapers also note that large numbers of ‘workmen’ were rendered drunk on grog supplied to them during their firefighting efforts. The ranks of the inebriated swelled further when a group of soldiers helped themselves to ‘three casks of bottled beer and one [cask] of wine’ salvaged from a burnt building they were assigned to guard against looting. In some cases, civic assistance proved anything but. For example, one group of intoxicated ‘volunteers’ attempted to cut the fire engine’s hoses in an effort to prolong the excitement the blaze generated.

Ultimately, the blaze burned an area covering approximately three-quarters of an acre and caused estimated property losses between £5000 and £6000. The source of ignition was ash (and embers) from a tobacco pipe. A man in Bayly’s employ was apparently smoking while working among dry canvas in the sail loft, and failed to notice the canvas had caught fire until it was too late.

A decade passed before another devastating fire struck the Port. On the evening of 9 November 1857, George Scarfe observed flames emanating from his ironmonger’s workshop on North Parade. Scarfe’s first act was to remove two casks of gunpowder from the premises, but in the time it took to perform this task the blaze completely consumed the building and started to spread to surrounding properties.

Following a delay of approximately ten minutes (due to the fire engine storage room’s key being misplaced), police arrived on the scene and began fighting the fire. Two additional hand-operated fire engines and their crews arrived shortly thereafter and joined the effort, but were unable to contain the fire. This was due primarily to the inefficiency of the devices operated by the police and the South Australian Company, both of which had developed leaks through poor maintenance and consequently were unable to produce a sufficient output of water. In addition, the fire had by that point spread to nearby wooden tenements and outbuildings, and was being fanned by a strong northerly wind.

As occurred ten years previously, the majority of Port Adelaide’s citizens rallied to assist with firefighting efforts. Others, in another repeat of the 1847 conflagration, gawked at the proceedings and/or took advantage of the chaos to loot items that had been pulled from burning homes and buildings. The South Australian Register reported a general lack of leadership and organisation in efforts to save property, with the result that ‘windows were smashed in, doors wrenched open, and the costliest articles of furniture and goods, as well as those of lesser value, were pitched into the street as so much rubbish’.

Fire soon threatened the Police Barracks, Customs House, Post Office, Bond Store, and other government buildings. In a last-ditch effort to prevent its spread to these structures and beyond, a small group of men led by Port Adelaide’s mayor Captain Edward French began physically dismantling a row of wooden cottages and fences adjacent to the Police Barracks. Incredibly, the initiative worked and the fire was checked before it could cross St. Vincent’s Street. Around midnight, Adelaide’s fire brigades and their apparatus arrived in the Port—albeit too late to battle the worst of the blaze, which by then had been brought largely under control. Adelaide’s firefighters were criticised for their delayed response (a message had been dispatched to the city shortly after the fire began), but countered that their requests for official confirmation of assistance went unanswered. It was later revealed that the Port’s telegraph office was closed at the time the incident occurred, but this seems irrelevant given that the fire was apparently visible in Adelaide and word was delivered to city authorities by messengers on horseback.

In terms of damage, the blaze covered several acres and destroyed three hotels, twelve shops, one bank, sixteen cottages, two stables and several outbuildings. This constituted approximately half of Port Adelaide and nearly its entire shopping district. Total financial losses were estimated between £100 000 and £250 000, and many of the destroyed properties were uninsured. While there were no human injuries or fatalities, several pigs and a cat were killed in the blaze.

Following the 1857 fire Port Adelaide acquired a New Improved Ordnance Pattern Fire Engine, a hand-operated device on wheels with a water-holding capacity of 1365 litres. By 1866, water mains were extended to the Port, thereby improving, albeit in a limited way, the water supply available for firefighting. A fire brigade with paid superintendent was operating in the community by the 1870s, and was capable of deploying as many as three hand-operated hose reels. Three teams of volunteers (based at the Black Diamond Line, the Government Waterworks Yard on Nile Street, and Port Adelaide Railway Station) were responsible for maintaining and operating the hose reels.

These resources were put to the test in the early morning hours of 19 December 1885 when fire erupted at Crooks and Brooker’s multi-storey ironmongery and furnishing store on Lipson Street. The Port’s three volunteer firefighting units were on the scene quickly, as were a number of residents who attempted to assist with their personal water hoses. However, as more lines were attached to the firefighting standpipe, the available water pressure decreased. Disaster was averted by the arrival of a large contingent of sailors from the warship HMCS Protector, who with ‘great daring…climbed to the top of the buildings with [their] hose and directed it to any point where the fire was fiercest’. As in the previous two fires, strong winds assisted in fanning the flames; however, gusts were variable and consequently did not push the fire in any one direction long enough to ignite adjacent buildings and structures. In addition, a large brick wall partly contained the blaze and prevented it from extending into the next-door property of Wigg and Son’s bonded store.

A contingent from Adelaide’s Central Fire Brigade was dispatched to help tackle the blaze, but arrived after it had been brought under control. Indeed, the Port’s local firefighters, with assistance from Protector’s crew, ultimately prevailed and damage was limited to Crooks and Brooker’s premises (which was completely gutted), as well as part of an adjacent coppersmith business owned by James Ramsey McColl. The total estimate for losses and damages was approximately £50 000, more than half of which comprised the merchandise in Crooks and Brooker’s store. Some witnesses later claimed the fire originated in the cellar of McColl’s workshop, but its exact cause was never determined. 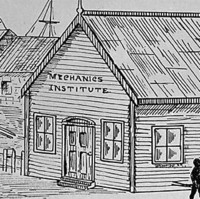 The Mechanics Institute in Port Adelaide, c. 1854. This building was destroyed in the 'Great Fire' of 1857 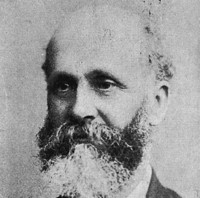 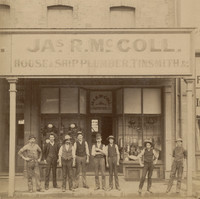 The coppersmith shop of James Ramsey McColl, c. 1880. This building was heavily damaged in Port Adelaide’s ‘Great Fire’ of 1885 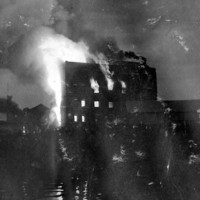 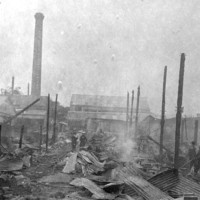 The aftermath of a fire at the Globe Timber Mills in Port Adelaide, 29 July 1920 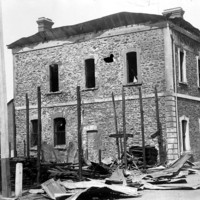 The remnants of two fire-ravaged buildings at Port Adelaide, 1914

Hi Steve,
We don't have those details on file but there are a number of places you can try looking. You can search for businesses operating at your address in the Sands & McDougall directories held by the State Library here
- https://guides.slsa.sa.gov.au/c.php?g=410329&p=2795763 There's a handy guide to researching property history on the State Recorrds website here - https://archives.sa.gov.au/finding-information/discover-our-collection/h... or being in Port Adelaide you have some excellent local history resources through the City of Port Adelaide Enfield here - https://www.cityofpae.sa.gov.au/page.aspx?u=2357

Best of luck with your research!

To Whom it may concern
Hello, I own the old Jones Bros building on ST Vincent st Port Adelaide, I am in the process of restoring the original balcony and installing a new parapet I have an old photo from approx 1877 I was wondering if you might know the actual age of my building? the address is 226-230 St vincent street as i wish to add this to my parapet along with the Jones Bros name
Kind Regards Steve