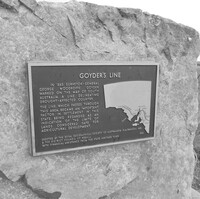 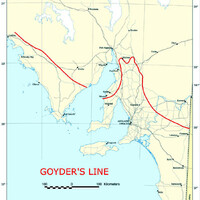 After inspecting northern pastoral lands devastated by a drought in 1864–65, Surveyor-General George Woodroffe Goyder advised the colonial government to discourage farmers from planting crops to the north of a line delineating the extent of the 12-inch (30cm) annual rainfall.

The law was short-lived; favourable seasons in the north encouraged the government to pass Act No. 22 of 1874 repealing the 1872 Act and allowing the sale of land under credit agreement outside ‘Goyder’s Line’. A run of bad seasons in the 1880s halted the northward progression, forcing many farmers to abandon their homesteads and, more often than not, a severely eroded landscape.

This is a revised version of an entry first published in The Wakefield companion to South Australian history, edited by Wilfrid Prest, Kerrie Round and Carol Fort (Adelaide: Wakefield Press, 2001). Revised by the author, edited lightly and references updated. Uploaded 8 April 2014. 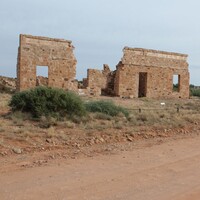 The ruins of the Exchange Hotel in the ghost town of Farina, 2011.
Courtesy of/Photographer:Pauline Cockrill, History SA 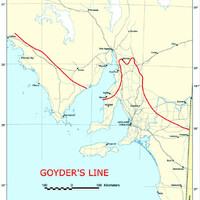 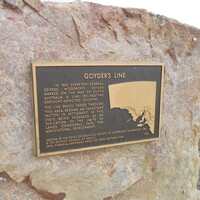 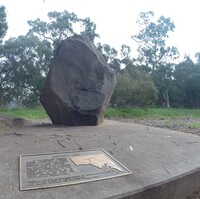 I have fixed the typo in this article Phillip & Andrew.

A good point Greg, I think most of the interpretation following Goyder's findings has focused on rainfall as that has obvious implications for agriculture, and therefore has become the way the line is most often referred to.

In recent commentaries on Goyder's Line I read much about 'rainfall',: but what is usually missing is that Goyder based his assessment on his observation of vegetation, not rainfall records.

Kerr, Margaret Goyder, The surveyors: The story of the founding of Darwin (Adelaide: Rigby, 1971)

Associated with:
Agriculture
Associate of:
Climate