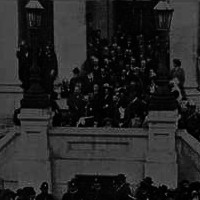 Self-government – meaning a shift from London to Adelaide in the effective locus of authority – was granted in 1856. Since then the South Australian parliament has been able (subject since 1901, as explained below, to the Australian Constitution) to legislate for the welfare and good government of the state.
1901

Federation in 1901 brought into existence an Australian Constitution that established a national level of government (‘the Commonwealth government’) with jurisdiction over South Australia.

‘Government’ in its modern sense denotes legitimate authority constitutionally exercised through permanent public institutions. Government in this sense arrived physically in South Australia with Governor John Hindmarsh in December 1836 though it was clearly shaped by prior decisions made in London. Colonial authority as devolved from London was initially divided within an unusual governmental structure. The governor was responsible for general government matters but independent Colonisation Commissioners were responsible for land distribution, town planning and the immigration of healthy young settlers in accordance with the Wakefield Scheme for the planned development of the colony. Within two years, the tension between the two sources of authority had to be resolved by appointing the governor as the resident commissioner and in 1842 the office of the commissioners was abolished.

Shift of authority to Adelaide

Self-government – meaning a shift from London to Adelaide in the effective locus of authority – was granted in 1856. Since then the South Australian parliament has been able (subject since 1901, as explained below, to the Australian Constitution) to legislate for the welfare and good government of the state. Likewise the executive branch of South Australian government has evolved from its initial gubernatorial simplicity to a full apparatus of departments, agencies and instrumentalities headed by a cabinet under the leadership of the premier.

A number of developments have affected the shape, capacity and accountability of government in South Australia over the 175 years (a substantial period by any international standard) since the 1836 beginnings.

There was the transformative impact of Federation in 1901 bringing into existence an Australian Constitution that established a national level of government (‘the Commonwealth government’) with jurisdiction over South Australia. Section 106 of the Australian Constitution authorised the continuation of state-level government ‘subject to this Constitution’. Some government functions, previously the responsibility of the South Australian colonial government, immediately came under Commonwealth jurisdiction (e.g. the postal system). Some functions were transferred later, either because a Commonwealth government chose to exercise previously inactivated powers (e.g. in relation to family law) or because it reached a specific agreement with the state government (e.g. the transfer of South Australia’s non-metropolitan railways to the Commonwealth). Other functions have continued under state-level administration – with ‘human services’ functions such as hospitals, education, policing, public housing, correctional services and personal welfare assistance being particularly important – though often with an increasingly significant Commonwealth funding involvement.

As a matter of constitutional principle, the Commonwealth government and the South Australian government were created as, and formally remain equal partners within the federal system, each embodying ‘the Crown’ and each exercising ‘sovereignty’ over matters within its jurisdiction. South Australians are thus jointly governed by a Commonwealth government and by a state government, as well as through a local government system that, contrary to some popular perceptions, has no entrenched constitutional status and is formally an instrument of the state government.

The relative financial strength of the Commonwealth grew over the twentieth century and its potential jurisdictional scope was expanded by a number of High Court decisions in relation to matters such as conditional grants and foreign treaties. These changes have given the Commonwealth a greater capacity to influence matters within the jurisdiction of the South Australian government than was probably intended by the drafters of the Australian Constitution. In practice, the Commonwealth’s financial capability needs to be weighed against the state government’s continuing capacity to portray itself as uniquely concerned with the specific welfare of South Australians, thus giving the state government a relative political strength that to some extent belies its weakened constitutional and financial status.

Growth of the government sector

A second important development has been the overall expansion of the size and scope of the government sector in general. South Australia’s colonial government focused its attention mainly on economic development in relation to transport, communication, agriculture, irrigation, mining, roadways and so on. This focus on the provision of physical infrastructure remained important in the twentieth century, through both the state and the new Commonwealth government, but it was supplemented by an increasing emphasis on social services such as health, welfare and education (at the state level) and income support (at the Commonwealth level), especially in the second half of the century. The relative prominence of state-level social services accelerated after the end of the Playford era and the advent of state Labor governments after the mid 1960s, accompanied by government initiatives in new areas like the arts and ethnic affairs. The rate of governmental expansion plateaued in the 1980s and went into reverse in the 1990s, as many functions and services long embraced by the public sector were privatised or outsourced to the private sector.  The trajectory into the twenty-first century, with South Australia’s governmental sector (like its counterparts around the developed world) continuing to negotiate the appropriate balance between public provision, private markets and community engagement, remains unsettled.  It seems unlikely that there will be a return to the large-scale public enterprises of the past but the increased economic prominence in South Australia of both the defence sector and the mining sector represents an interesting reversion to some aspects of earlier economic models with their respective government-investment-led and extraction-based rationales.

Dominance of the executive branch

A third development, closely connected to the larger overall scope of government, has been the growth in relative prominence and capacity of the executive branch of government in particular. Cabinets at both Commonwealth and state levels remain drawn from and formally accountable to their parliaments. But as government functions – from environmental management to disability services, from telecommunications regulation to arts administration – have diversified and become more technically complex, parliament’s capacity to exercise effective oversight of various public-sector agencies and to exercise independent legislative judgement has become more problematic.

Effective parliamentary upper houses can provide a partial exception to this story of executive dominance, and the South Australian Legislative Council has been a particularly strong example. Ever since 1856 the Legislative Council, with its distinctive electoral basis (a property franchise until the mid 1970s, proportional representation thereafter) leading to a distinctive membership, has often acted as a major constraint on the South Australian government even when – as during the Playford era – both houses of parliament were nominally controlled by the same party.

The people’s view of the government

A final development has been a discernible psychic shift in how government is regarded by the governed. The authority of government (along with other traditional institutions) has weakened, and the governed – more educated than at any time in human history – seem to be becoming more uncertain and sceptical about what governments can or ought to achieve. In this, South Australia resembles other Western liberal-democratic polities. 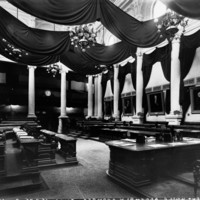 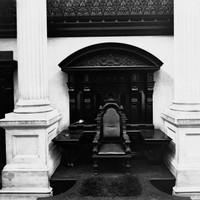 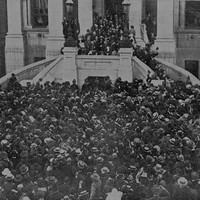 Image courtesy of the State Library of South Australia, SLSA: B 68277, Public Domain.

Selway, B, The Constitution of South Australia (Sydney: Federation Press, 1997)

Associated with:
Song of Australia