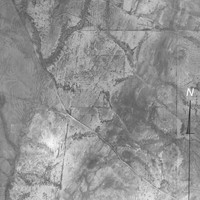 Long narrow strips of land separated by furrows are visible in paddocks now devoted to pasture in many parts of South Australia. They are reminders of a traditional farming practice brought to Australia by early European settlers.

A millennium ago, and earlier in Anglo-Saxon times, the villagers of Britain and Western Europe enjoyed common access both to grazing land and to the cultivated land that produced the cereal crops vital to their wellbeing: In truth was it said that ‘the ploughman feeds us all’. Fields were divided into strips known variously as lands, ridges or rigs, stitches or stetches, or selions.

The pattern of lands developed in an attempt to ensure that all the soil was turned, and an elaborate ploughing procedure evolved. Using a single share plough, they ploughed long, narrow (typically 6–8m across) strips rather than attempting the whole cleared paddock. The farmer could choose to work either laterally from both sides of an initial furrow or inwards from the edges of the planned or existing strip. Either way, his ploughing produced an especially deep furrow at the junction of the lands because there the plough was pulled in opposite directions, causing the soil to be thrown to either side.

The single-share plough then in use consisted of a share, coulter and mould board. It was usually pulled by oxen, being run up and down on opposite sides of the initial cut which was about a furlong or 220 yards (200m) long. In order to reduce the time and effort spent in taking the plough to the other side of a widening strip, at the end of the strip, in what was called the hardaker or foraker, the breadth of the strip was purposely limited to a few – typically 5–10 – metres. Hence the strips are narrow by comparison with their length.

This practice had the added advantage that ploughing such a strip constituted a day’s work for the ploughman, though this obviously varied with soil type and the energy of man and beast. The pattern of lands was emphasised where deep furrows were used as paths whereby to access the land and the crop. The waste of land incurred was slight – about 1% of the area – and was outweighed not only by the practical working advantages of the system but also by its inherent fairness, with each village family owning and working lands of various soils and other qualities such as drainage, aspect, and proximity to home.

The system of working lands was brought to South Australia by farmers who migrated from Britain and Germany in the 1840s and 1850s, just as it was exported from France to the Quebec Province of eastern Canada. It persisted as an arable farming practice until the development of multi-shared ploughs, including the stump-jump type. The pattern of lands is preserved where arable farming was succeeded by pastoral activity. Thus, in the early years of settlement in the Mt Lofty Ranges, communications were poor and regardless of whether that was the best use of land, cereal cultivation was necessary to provide flour for local communities. But with improvements of roads and the development of the Mallee lands for wheat and barley production, these areas reverted to pasture and the deeper furrows between lands were preserved. Many can be seen in paddocks around Harrogate and Tungkillo, for example. Some are obvious, though others are best detected in winter when there is green pasture, and early or late in the day when shadows pick out the shallow linear depressions. Unfortunately, some furrows between lands have channelled runoff sufficiently to induce gullying. 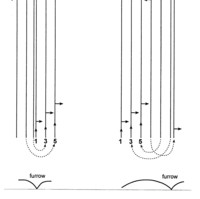 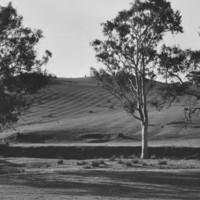 ‘Lands’ or strips preserved as a result of returning paddocks ploughed to pasture. 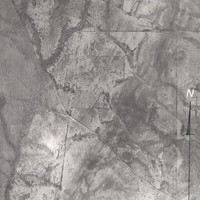 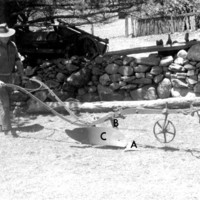 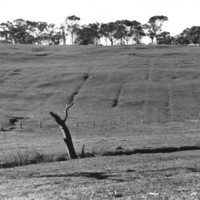 Incipient gullies caused by the exploitation of furrows between ‘lands’ 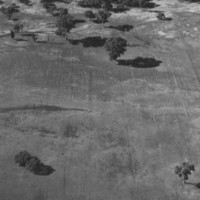