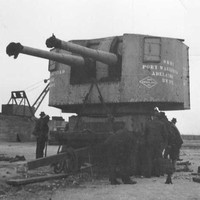 South Australia has played a major role in Australian defence science and technology since the 1920s. Before Federation, all of Australia’s defence materiel was supplied by Britain, and the manufacture of military weapons in Australia only began at Maribyrnong in Victoria in 1911 and Lithgow in New South Wales in 1912. In the 1920s Australia’s gradually increasing military production necessitated a place to carry out ‘proof’, that is scientifically testing weapons and ammunition. The seabed off Port Wakefield was selected because the low tide left a large flat expanse of bare sand exposed, so artillery shells and other projectiles could be fired into water at high tide and then recovered undamaged for inspection when the tide went out. The Port Wakefield Proof Range opened in 1929 as South Australia’s first defence science institution. It is still in operation as the Proof and Experimental Establishment.

The Second World War gave South Australia a direct role in the munitions industry. At the outbreak of war it was assumed that Britain would assist Australia with war materiel, but this hope was abruptly shattered in May 1940 when the British army in France was soundly defeated by the German invasion. The Dunkirk evacuation saved the remnants of the army, but they left behind most of Britain’s transport, armour and artillery. This was a crucial event in shaping Australian defence policies, because it became clear that the war was going to be long and difficult, and Australia could expect no imperial assistance in arming its forces. On 11 June 1940, only a week after the evacuation ended, the Commonwealth government created a new Department of Munitions to oversee increased defence production. A month later, Britain formally notified the Australian government that ‘Australia can rely on England for no further supplies of any aircraft, materials or equipment of any kind’.

The manufacture of armaments was decentralised around the south of the country. Premier Thomas Playford successfully pressed South Australia’s qualifications to share in this industrial windfall, citing the state’s central location, and distance from any likely theatre of hostilities. By November 1940 the largest explosives factory in Australia was under construction in farmland at Salisbury, north of Adelaide. Other munitions factories went up on greenfields sites at Finsbury (now Woodville North) and Hendon, and the South Australian Railways workshops at Islington and civilian plants such as General Motors-Holden, Perry Engineering and Kelvinator were re-tooled for military production. Islington played an important part in the Beaufort program, which built 700 torpedo bombers for Australia’s defence. Further afield, the Broken Hill Proprietary (BHP) Company’s port at Whyalla was being developed for steelmaking and shipbuilding. By 1941, South Australia had become an important new centre of Australian defence manufacturing industry. After the war ended, some of this manufacturing capacity was closed down, but much converted to other commodities such as vehicles and white goods, giving South Australia an enhanced secondary industry sector for decades. The Commonwealth Munitions Supply Laboratories moved into part of the Finsbury complex in 1946.

A new defence enterprise arose almost immediately after the war. In 1946 the Anglo-Australian Joint Project was initiated to test the newly developed generation of weapons: long-range missiles and nuclear warheads. A desert site northwest of Port Augusta was selected, and the town of Woomera was built there. At first the tests at Woomera were British/Australian joint ventures, but later the European Launcher Development Organisation also used the range, and the American National Aeronautics and Space Administration built the Island Lagoon and Nurrungar satellite tracking stations nearby. Over 30 years, Woomera tested a wide variety of satellite launchers and military missiles, including the Skylark, Black Knight, Black Arrow, Blue Streak and Europa programs and the pilotless Jindivik target aircraft.

The vast outback expanse of the Woomera Prohibited Area was also used to test several British nuclear weapons. In 1953 two atomic bombs were exploded in the Totem tests at Emu, west of Coober Pedy. Three years later the tests moved further south to Maralinga, where four more weapons were exploded in Operation Buffalo in 1956 and three in Operation Antler in 1957. Testing of nuclear weapon components continued until 1963, and has left a legacy of radioactive contamination in the Maralinga area.

While Woomera was operating, its administrative identity was steadily evolving. The Anglo-Australian Joint Project expanded into the Long Range Weapons Establishment in 1947, then in 1955 amalgamated with the Defence laboratories within the Salisbury complex to become the Weapons Research Establishment (WRE). In a further rationalisation of the national defence science program, WRE united with all other defence-related research institutions around the country in 1975 to become the Defence Science and Technology Organisation (DSTO) with its state headquarters at Salisbury. The Munitions Supply Laboratories at Finsbury became successively the Defence Research Laboratories (1948), Defence Standards Laboratories (1953) and Materials Research Laboratories (1974) before being absorbed into DSTO in 1975. The Salisbury complex housing DSTO and defence contractors was renamed Edinburgh in 1997, reflecting the name of Edinburgh Royal Australian Air Force base alongside, built to serve the WRE in 1955.

BHP had not built any naval vessels at Whyalla since the war, and merchant shipbuilding ceased there in 1978. Missile testing at Woomera had wound down by the 1980s, and the town was opened to the public in 1982. The American tracking stations at Island Lagoon and Nurrungar closed in 1972 and 1999, respectively. Since the Second World War the defence science complex within South Australia has encouraged the presence of several major defence contractors, notably British Aerospace Engineering (BAE), who began testing products at Woomera in 1953 and remains a major defence manufacturer today as BAE Systems Australia. In 1989 the Commonwealth government-owned Australian Submarine Corporation was established beside the Port River to build six Collins class submarines for the Royal Australian Navy. It also remains a prominent Australian defence manufacturer. 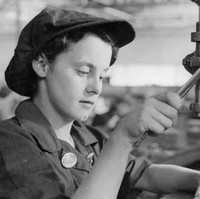 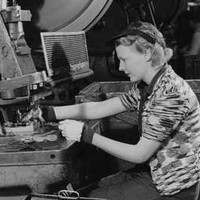 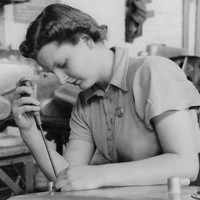 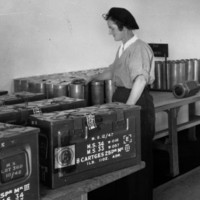 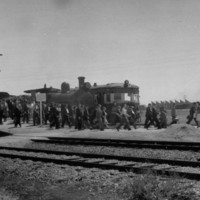 Men and women arrive by train to work at the Salisbury Munitions Works, January 1943 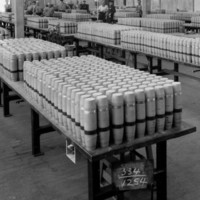 A group of men and women manufacture artillery shells at the Salisbury Munition Works, January 1943 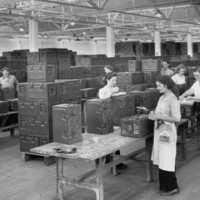 A group of women and men manufacture ammunition cases at the Salisbury Munition Works, January 1943 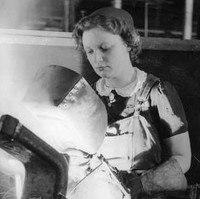 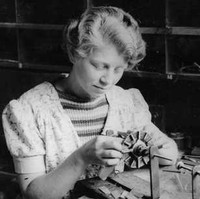 A young woman winds the coil around an armature at a South Australian munitions factory, 1943
Courtesy of/Photographer:Darian D. Smith 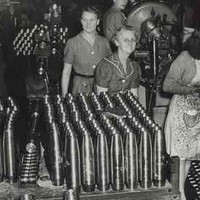 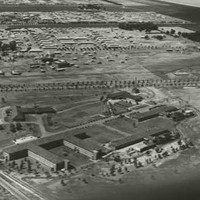 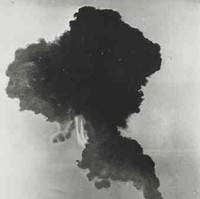 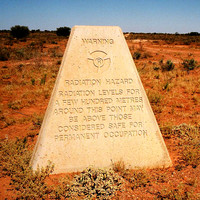 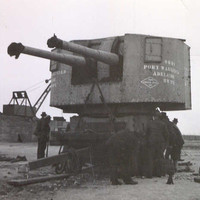 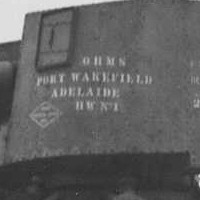 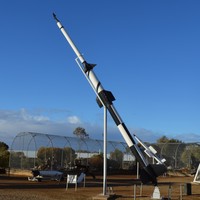 A collection of rockets on static display at Woomera Missile Park, 26 May 2012
Courtesy of/Photographer:Sascha Grant 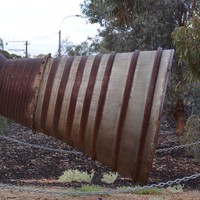 The exhaust section of a rocket on static display at Woomera Missile Park, 26 May 2012
Courtesy of/Photographer:Sascha Grant 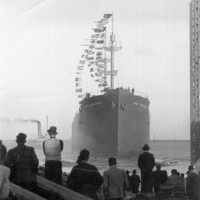 The merchant vessel Iron Monarch shortly after being launched from the shipbuilding facility at Whyalla, 1943 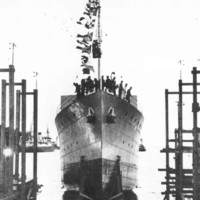 The Bathurst Class corvette HMAS Whyalla is launched at the BHP shipbuilding facility at Whyalla, 1941 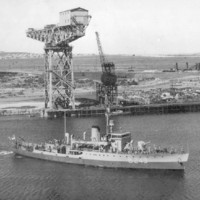 Hi Jeremy,
Sounds fascinating. Best of luck tracking down the publication. My only other suggestion would be to try the archives and see what you can find there.

Hi there, my grandfather Harold Fearn served as a Staff Sergeant at the proofing range during WW2. He was tasked with both a testing, evaluation and then scrapping of a WW1 German Railway gun at the range. I am currently trying to locate a defence publication that he passed down to my mother which detailed both the gun/carriage and general ballistics of the gun - he even presented me with a pic of him standing next to the railway gun in the day (1940's) all of which I can only assume are part of the Nelson archive somewhere. Failing this I have considered contacting the department of defence to see if it would be possible to get a copy of the publication which I would assume is now declassified - but I wouldn't hold my breath. Happy to talk more on this one if it is of interest to anyone. i wouldn't mind checking out the range again, we used to go there for open days back in the late 70's to watch test firings of a range of field guns/howitzers etc.

Thanks Peter,
The pictures sound very interesting. Any chance you'd be willing to share them here by clicking on the 'Add to' button at the top of this article?
Catherine,
Online Programs, History SA

Greetings Robert,
I have a couple of pics of the "Amiens" gun on display between wars in Australia -I think.

Are the of any interest to you?
Regards,
Peter Wyschnja
Heritage Munitions Museum
Port Lincoln SA

We unfortunately have very little in our archival repository (such as plans and schematics) that detail the carriage and bogies on which the Amiens Gun was mounted. However, there are a few resources I can recommend that might assist you in the development of your model. A Wikipedia page about the Amiens Gun (http://en.wikipedia.org/wiki/Amiens_Gun) contains a number of archival photographs that show details of the carriage's external components and construction. It might also be worth sending an inquiry to the Australian War Memorial, as it hosts a link about the Amiens Gun (http://www.awm.gov.au/exhibitions/1918/battles/amiensgun/), and may retain plans, photographs, and other useful archival sources. It would be best to contact the Memorial's Research Centre (e-mail: info@awm.gov.au; and phone: +61 (02) 6243 4315). Good Luck!

After some help. After information on the Aminens 28CM gun cartage that was. captured in WWI & brought back to Australia. The barrel is at the War Memorial in Canberra. The rail mounted charage was used at the proofing grounds at Port Wakefield. Until scraped in the 1960,s would like to model it. After any information on charge pathetically the internals. Could you help or suggest any person or department to correspond with, thanks.