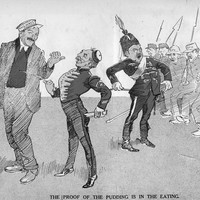 Universal military training was introduced via the Commonwealth Defence Act (1911).
1951

Liberal Prime Minister Robert Menzies, fearing the outbreak of a third world war, brought in universal national service training for 18 year olds. This was abandoned in 1959.
1972

Conscription ended in the early 1970s and has not been re-introduced, despite sporadic calls from the Returned Servicemen’s League (RSL).

Universal military training, including ‘boy conscription’ for those as young as 12, was introduced via the Commonwealth Defence Act (1911). Especially in South Australia, with its free origins, significant numbers of educated and articulate women, and powerful non-conformist presence, there were immediate objections, both on principle and to the harsher aspects of its practical implementation. Adelaide Quakers formed the Australian Freedom League in 1911 to fight for the repeal of compulsory training. Local trade unionists also resisted conscription, bolstered by militant miners in Broken Hill.

The First World War  broke out before the first conscript intake was fully trained and a separate volunteer Australian Imperial Force for service overseas was raised. By 1916, flagging enlistment persuaded Prime Minister Billy Hughes that the five Australian divisions could be maintained only by forcible recruitment. To pressure a reluctant Labor-dominated senate to pass the necessary bills, Hughes put the question to referendum in October 1916.

The referendum was narrowly defeated, with South Australia second only to New South Wales in its negative vote of 57.6%. A close vote on party lines had been expected, but the big No vote in German-settled areas revealed that a high proportion of these people had baulked at forcing their sons to fight the Fatherland and resented being harassed by officials and patriotic Anglophiles. Farmers worried about the loss of rural labour, and some Catholics responding to the Irish troubles had also crossed party lines, but it was on the hapless Germans that retribution fell. A noticeable drop in the negative vote in German areas in the second referendum in December 1917 still left the state’s No vote at 56.1%, but made South Australia the only state not to increase its No vote.

Limited conscription imposed in the Second World War was accepted more readily, due to the Japanese threat to Australia and the use of American conscripts to defend our shores. South Australia was one of four states to give Labor Prime Minister John Curtin approval to broaden the definition of ‘home defence’ to cover the south-west Pacific.

In 1951, Liberal Prime Minister Robert Menzies, fearing the outbreak of a third world war, brought in universal national service training for 18 year olds. Scaled down in 1957, this was abandoned in 1959 and no conscripts were used in Korea, Malaya or Borneo. However, as Australia’s involvement in Vietnam grew, young men turning 20 were required to register and take their chances of being selected to undertake two years’ national service in regular army units.

The first ‘birthday ballot’ was held on 20 April 1965. Public support for Australia’s involvement in the Vietnam War waned following the death of the first conscript, South Australian Errol Noack, on 24 May 1966.

The End of Conscription

Conscription ended in the early 1970s and has not been re-introduced, despite sporadic calls from the Returned Servicemen’s League (RSL). In 1999, the South Australian branch unsuccessfully lobbied for an end to the RSL’s national service policy in favour of expanded reliance on better-resourced reservists to supplement regular forces. There is support in some quarters for a scheme of compulsory national service of a non-military nature. 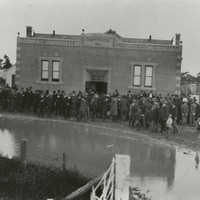 Image courtesy of the State Library of South Australia, SLSA: B 36165, Public Domain 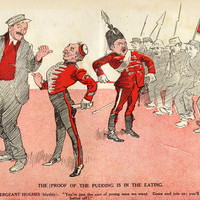 Forward, R and B, Reece, Conscription in Australia (Brisbane: University of Queensland Press, 1968)