It’s the middle of the 1950s. Australia is a country that is increasingly succumbing to the influence of American culture. We love our cars, our movies, and our popcorn. So what makes better sense than to introduce the latest American craze, the drive-in cinema?

The first real American-style Australian drive-in opened in Burwood, Victoria in 1954. There had been other iterations of the drive-in idea but the Hoyts Skyline in Burwood was the first to truly embrace the American ideal of a drive-in. Success was quick, and soon drive-ins began to spring up around the country, providing all states with access to a cheaper version of entertainment than the theatre.

The first drive-in to open in South Australia was the Blue Line on the corner of West Beach and Military Roads. This opened on 28 December 1954 following legislation passed by the Dunstan government allowing for drive-in theatres under the Entertainment Act Amendment Bill. In the years following 45 metropolitan drive-ins and 22 regional drive-ins have operated in South Australia.

Drive-ins provided a more family-friendly form of entertainment than the traditional theatre offered. Parents no longer had to be concerned about their children getting tired and cranky. They could be dressed in their pyjamas, ready to be put straight to bed upon arriving home, and noisy tantrums that were so embarrassing in public were confined to the interior of the car. Formal dress wasn’t required as patrons didn’t need to step outside. The reduction in formality was welcome relief for families who dreaded the hassle of dressing up.

However, it was not to last. Throughout the 1960s and into the 1970s, the success of the drive-in theatre slowly began to wane. A number of factors contributed to this: more televisions at home, increasing prices, a shift in society’s expectations about acceptable clothing (meaning that formal clothes in general were no longer a requirement) and the advent of videocassette recorders (VCRs). The advent of the head rest for front seats also made it difficult for rear passengers to see the screen.

Now there are less than 20 drive-ins remaining in Australia. They stand as a remnant of the past, but still enjoy a healthy patronage, particularly among young couples. 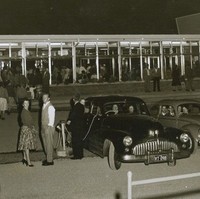 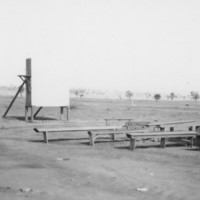 Thanks Penny,
We'll get on it.

Hi this needs updating as from next month there will only be one drive in left in SA the one in Coober Pedy.