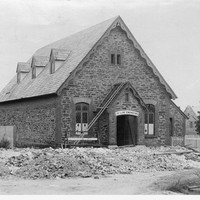 Officials are required to tell the public library if they intend to destroy government records, allowing library officers to take possession of any condemned material.
1978

The city of Adelaide is the first local government body in South Australia to do so.
1996

The Friends of South Australia’s Archives is founded, as an advocate for the preservation of, and access to, archives in the state.
1997

Established the office of State Records, replacing the Libraries Board as final arbiter on the fate of South Australia’s official records.

‘[T]he word is used to denote all the official documents that come through Government Departments and Law Courts to the Record Office . . . But there are others who would include early historical documents.’ So said Professor Henderson in his 1915 report to the South Australian government, Collection, Storage, and Preservation of Archives in Europe.

As a direct consequence of this report the former mounted police store, built in 1867 behind the Art Gallery of South Australia on North Terrace, was allocated for a newly created Archives Department under the control of the Board of Governors of the Public Library, Museum, and Art Gallery of South Australia. On 1 February 1919 GH Pitt was appointed archivist, with Mabel Hardy as his assistant; when gazetted on 5 August 1920 they took charge of the first official archives in Australia. Archival legislation passed in 1925 made it compulsory for officials to give the public library notice of their intention to destroy government records, empowering library officers to take possession of any condemned material.

The Commonwealth established a branch of the Archives Division of the National Library in South Australia in 1954. In 1961 the Commonwealth Archives Office was set up as part of the Prime Minister’s Department, ending 14 years’ management by the National Library. In 2001 National Archives of Australia moved its local office from inner-suburban Collinswood to an Adelaide city location, following a considered process of deaccessioning or relocating much of its current South Australian holdings. The city of Adelaide became in 1978 South Australia’s first local government body to appoint an archivist, and subsequently constructed a purpose-built archival facility at Topham Mall in the city.

Since the mid 1970s the public has shown increasing interest in heritage issues, and in family and local history. This interest and the concurrent development of the archival profession have seen the adoption of a broader definition of archives, namely that archives are records received or created and maintained by an individual or organisation in the conduct of business that are preserved because of their continuing value. Numerous religious, educational, regional and commercial organisations have established archives. Of particular note is the establishment, in 1998, of The Bob Hawke Prime Ministerial Library at the University of South Australia.

During the 1990s economic constraints forced a rationalisation of the holdings of some archives. Against this trend, the Friends of South Australia’s Archives, which has become an effective advocate for the preservation of, and access to, archives in the state, was formed in 1996. The new Archives Department in 1919, during conversion from an ordnance store

Image courtesy of the State Library of South Australia, SLSA: B 277, Public Domain The interior of the Archives Department during construction in 1923

Image courtesy of the State Library of South Australia, SLSA: B 1274, Public Domain The interior of the Archives Department during construction in 1923

Image courtesy of the State Library of South Australia, SLSA: B 1275, Public Domain

Brief descriptions of the holdings of many South Australian archival institutions can be found in the Directory of Archives in Australia, available in hard copy and on the website of the National Archives of Australia http://www.naa.gov.au/

Associated with:
History and Historians