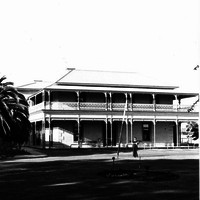 Woodville migrant hostel was administered by the State Government.
c. 1978

Opening later, and established in more permanent buildings, Woodville appears to have offered a slightly higher standard of accommodation than most of the earlier migrant hostels.

Woodville hostel started life as a private residence, was converted to become a hostel for munitions workers during the Second World War, and operated as a YWCA hostel in the 1950s and 1960s before being used for migrant accommodation. Several former residents remember the nineteenth-century Tenterden House, which along with two two-storey units, formed the main hostel complex.

In the late 1960s, when the Elder Park hostel was dismantled, staff and fixtures were transferred to Woodville. Bedrooms were small and basic. Families were placed in ‘suites’ with connecting doors. Bathrooms and laundries (including an ironing room) were communal. Unlike other hostels, the 180-seat dining room at Woodville featured table service. Residents were called to meals by a bell. The Department of Immigration had an office on site to assist newly arrived migrants.

Woodville had a large garden and a playground for children. The buildings also included seven lounge rooms, two for adult use with televisions, one for children and four for ‘general relaxation’. There were no recreation rooms or child care.

The site of the former Woodville hostel is now covered by the Queen Elizabeth Hospital car park.

I remember the grounds vividly, which were absolutely beautiful. I remember sitting out on the seat that was under this huge tree and somebody brought me a peach … I’d never ever tasted a peach like that … It was just gorgeous with the children. Elaine Henderson, Woodville hostel 1972, interviewed 2013

Residents at the Woodville Reception Centre included migrants from Britain, Canada and the United States. Most were recruited for government employment, including a number of teachers employed by the Education Department. Others had come through the State House Purchase Scheme. A state government report in 1975 describes Woodville hostel’s residents as largely professionals (doctors, teachers, professors and others) recruited under the skilled migration scheme.

The Good Neighbour Council of South Australia gave the Woodville hostel a good review in its ‘Newcomer’s Guide to South Australia’, describing it as short term accommodation housing mostly British migrants. By the mid-late 1970s residents at Woodville came from a range of countries, including  Malaysia, India and South Africa. At the request of the Commonwealth Immigration Department people migrating through the Fairbridge Society, usually single parents, were also housed at the Woodville hostel.

When there were fewer migrants arriving, the Woodville hostel was used to house school children visiting Adelaide from the country. Cyclone Tracy evacuees were housed temporarily at Woodville hostel from late 1974 to  early 1975.
While official reports and written records paint a glowing picture of  Woodville hostel, life there  was not without its challenges. At least one letter from a disgruntled British resident survives in State Records of South Australia, humorously criticising the hot food served in mid-summer when temperatures were above 35 degrees. 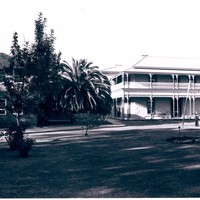 Thanks for sharing your memories Lynn,
It sounds like you had quite a good experience, and your own room!

My family lived in the Hostel for about 6 weeks in early 1976 when I was 15. My younger sister and brothers were with mum and dad in a family room. My older sister and I were given our own rooms (I remember the gentleman who booked us in called my sister and I the girlies). I remember the lady standing outside the dining room ringing a large hand bell at mealtimes. The food was lovely and there was plenty of it. We had an allocated table. Lunch was frequently smorgasbord -help yourself hot food and lovely desserts.

Great memories, thanks for sharing Rita.

We arrived at Woodville Hostel December 1970 as a family. Mum, dad myself, 2 sister and 2 brothers. I had my 17th birthday in the hostel. We came from Birmingham Uk. I remember sitting under the big var and ah that went around the outside of the hostel, my oldest sister had a room to herself, while my younger sister and I shared a room. Mum, dad and 2 younger brothers all shared a room. Overall our stay there was fine. We stayed there until the January, then moved into a housing trust house at Ingle Farm. My brother still lives in the same house after 50 years, He bought the house off our dad.

Sorry to hear you had such a bad experience Steven, hopefully it improved from there!

We stayed at the hostel from 15th September 1973 until the end of October when we moved into the home my parents bought , hated Woodville primary school only went there for 5 weeks.

Thanks for sharing your memories Sharon, its interesting to hear from someone who didn't stay in Australia!

I stayed at Woodville in 1972/3 with my parents when we emigrated from the UK. I was only six or seven but remember going to the school and having a packed lunch in a brown paper bag outside on a bench under a veranda. The classroom seemed quite scary and noisy compared to what I was used to initially. We eventually settled in Parafield Gardens. We all loved Australia and only came back due to elderly family in the UK.

Thanks for sharing that John, great to hear.

I was 11 when we arrived from Holland early 1967 and lived at Woodville Migrant Hostel for about three months. We were a family of seven. Went to Woodville primary school until we moved to Sydney.
Always reminded of our first arrival to Adelaide and Australia. Live in Brisbane now.

Thanks for sharing that Joyce.

The hostel was definitely directly across from the QEH, we arrived in Adelaide on the 16/02/1971 and stayed at the hostel, I gave birth to a daughter at the hospital on the 31/03/1971 , it was so convenient to just walk across the road to the hospital.

Thanks for alerting us Paul,
We did some research with the University of Adelaide which confirms what you say above. We know the Migration Museum staff are aware of this but sometimes physical displays in the galleries take time to update. I'm sure they'll fix it as soon as possible.

Hi, As a migrant from the UK, I lived at the Wooville Migrant Hostel from October 1974 through early 1975. I have a distinct memory of the Hostel being on Woodville Road DIRECTLY across from the QEH. Not as shown on the map in the Migation Museum - adjacent to the QEH at the intersection of Woodville and Findon Roads. I discussed this with the reception staff at the museum and they were of the opinion that the Adelaide Uni had prrovided the location information and they had no reason to believe it was incorrect.
However, they did further online checks and came across an item on the Charles Sturt Council website
http://www.charlessturt.sa.gov.au/MigrantHostels
Which also states that it was "located on Woodville Road (opposite QEH)".

In the interests of accuracy, it would be pertinent to conduct some checks on this and update your display if it is found to be incorrect.