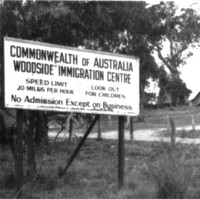 ​An afternoon tea, concert and craft show arranged by the new residents officially launched the immigration reception and training centre at Woodside in June of 1949. There were 1,000 migrants at the event. The centre was administered by the Commonwealth Government.
1963

About 26,000 Displaced Persons and assisted migrants passed through the ‘migrant camp’ at Woodside. Its isolation and limited public transport frustrated many residents, but some remember the beauty of its location.

Several sections of the Woodside army base were converted to house migrants. It was initially planned to convert two areas of the existing camp to become a holding centre, where women and children would stay when accommodation for them was not available where  men were sent for work. However, as Australia’s intake of Displaced Persons increased rapidly and government struggled to house and process all the new arrivals, Woodside was expanded.

An afternoon tea, concert and craft show arranged by the new residents officially launched the immigration reception and training centre at Woodside in June of 1949. There were 1,000 migrants at the event.

The army continued to occupy part of the camp, and residents remember children collecting empty bullet shells from the firing range. The sleeping huts were converted barracks, some dormitory style and some divided into bedrooms. The camp was run as five blocks, with a kitchen and supervisor for each block. As at other hostels, facilities including ‘mess rooms’, laundries, linen stores, showers, and toilets were communal. There was a canteen, recreation hall and cinema facilities. The hospital had three sections: maternity, general and children. A crèche and baby clinic were established in 1951. There was a primary school at the camp, and  high school students attended the Oakbank area school.

There is still an Army base located at Woodside. In recent years the nearby buildings at Inverbrackie have been used for the detention of asylum seekers.

I loved Woodside Camp and had a very happy childhood there, even though I was aware that my father wasn’t living with us, because he was working elsewhere, and that my mother wasn’t at home because she was working. Krystyna Pindral, Woodside 1950-1955, interviewed 1994 for Boatload of Dreams

Woodside Camp was a concentration camp but there was no barbed wire. The accommodation was worse because in the concentration camps they had wooden floors but we had no heating, nothing. Only we were free and we had enough food. Otherwise it was awful - for four years and two months. Ryszard Kazimir Kobylinski, Woodside 1949-1954, interviewed 1994 for Boatload of Dreams

Large numbers of Displaced Persons from across Europe were accommodated at Woodside hostel. Among the first residents were people from the Baltic countries (Estonia, Latvia and Lithuania), the Ukraine, the former Yugoslavia, Hungary and a significant number of migrants from Poland. German was the most commonly shared language and signs were posted in English and German. Assisted migrants came from a range of countries including Holland, Greece and Italy.

While a number of families were housed at Woodside on arrival, the camp also operated as a holding centre for women and children. In 1951 The Advertiser reported that over half of Woodside’s 1,700 residents were children and that Woodside had one of the highest birth rates in Australia. Another article claimed A migrant baby is born every other day at the Woodside migration centre.

There was a Catholic chaplain based at Woodside hostel. Visiting priests also delivered services in a variety of languages and to more than one denomination.

Films were shown regularly on site. Displays of craft, a ball and various other events were held to raise funds for amenities. Organisations including the Good Neighbour Council, Red Cross, Young Women’s Christian Association, Boy Scouts and Girl Guides were extremely active at Woodside hostel.

The Woodside United Soccer Team was almost undefeated in 1949, with players from six different countries taking on South Australian teams in the local competition. Both soccer and Australian rules football were played at Woodside hostel.

In 1959 numbers were dwindling at the then Woodside Migrant Accommodation Centre. The government briefly considered housing British migrants at the site, however, it was decided that it was not suitable and instead continued to house European migrants until 1963. 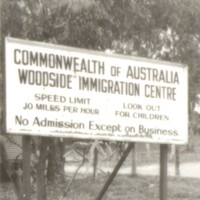 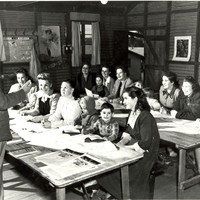 Wonderful Sue, thanks for sharing that here.

Hi Petra,
We don't have any information on file about Ladislaus. If you know when he arrived you might find the National Archives guides helpful - https://www.nla.gov.au/research-guides/finding-ship-and-passenger-records#
You might also find this guide to finding personal records related to the migrant hostels helpful - https://arts.adelaide.edu.au/humanities/hostel-stories/find-your-family
Best of luck in your search.

I am looking for a man called Ladislaus (Laszlo) Fazekas. As i know he was a priest in woodside for the Hungarien People. I am looking for all informations i can get. He arrived 1950.
Thank you for Heldin
Petra

Thanks for sharing your story John, glad you were well looked after!

My father(also john Barnes) was primary school teacher of the camp school from late 1952 to early 1954.the family lived in a 3 bedroom hut(quite comfortable from memory) and my considerably younger brother would have gone to the primary school there. I stayed there for short periods when working in Adelaide. I spent two weeks in camp hospital with pneumonia. The doctor was Dr. Lapidus and I recovered. Our hut(house) was near gate entry to army camp any my mother sometimes took cups of soup or tea to sentries guarding gate. It seemed like an OK place to me in a nice part of south Australia.

Sounds like a dreadful experience Wilhelmina,
Thanks for sharing, and glad to hear things improved for your family.

Woodside Immigrant camp from Jan 1959, we arrived what a terrible place, Mum crying most of the nights, Dad working away all day, food was terrible so was the accommodation. Toilets had red backs and were a long way from accommodation, which was just basic old wooden cabins. No heating or fans. We were given slop for food we had to line up for with containers. We ended up with yellow jaundice. We had a makeshift classroom for all ages to learn English. We ended up in a unit in North Adelaide but sick and no furniture we ended up in Glenelg Hostel which was better and ended up in a normal school.

Hello Everybody,
For some time already I am looking for information related to my ancestor (great-grandfather) Jozef Kapsa. I was able to find that he arrived to Port Adelaide on SS Goya in 1949, May 3rd. After some additional research i found out that he was placed in Woodside as a Kitchenman and ceased duty in 1949, June 29th. Step by step i finally managed to find last information at Adelaide Cheltenham cemetery which says he pased away in 1961, June 17th. His last abode (as per Cheltenham's record) was West Croydon, SA
Can someone direct me to organizations which can help me in finding out my great-grandfather history there in Australia ?
Kind Regards,
Piotr

There were a lot of children there I believe Lorenz. Do you have any photos?

Hi Adriana,
Woodside was Commonwealth run, so the records are all held by the National Archives of Australia. There's a handy guide for finding records of family in the migrant hostels here: https://arts.adelaide.edu.au/history/hostel-stories/find-your-family/

I was at Woodside with my parents from 1952-1953. Could someone please advise how to ascertain whether I went to school there?

Hi Henry, there's a useful guide to tracking people who stayed in the hostels here: https://arts.adelaide.edu.au/history/hostel-stories/find-your-family/

My parents were housed at Woodside from 1949 to about 1951. How can I get details of their internment?

Hi Peter, what details are you after? The article you've commented on provides a summary of what we know. If you click on map above it will show the location. If you want more I suggest starting here: https://arts.adelaide.edu.au/history/hostel-stories/find-your-family/

I was born in the woodside immigration camp in 1950. my parents came from Germany & Serbia. can you supply details of the camp please