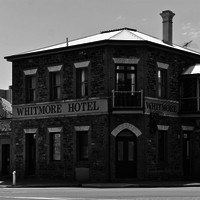 The Queen’s Arms Tavern or Inn, opened by 1 December 1838, sat on the northwest corner of Wright Street and Brown Street. The publican to 1846, Thomas Maslin from Wiltshire, England, had arrived on the Tam O’Shanter in 1836. Maslin later took up farming Willunga south of Adelaide – nearby Maslin’s Beach is named after him. The hotel began as a two-storey bluestone building. It was enlarged in 1912 by a freestone addition and again in 1952 by a large single-storey lounge area. One of the oldest hotels in the city, the Queen’s Arms Hotel has traded under several names: since December 2008 it has been the Whitmore Hotel.