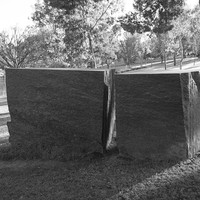 The Space Between is a memorial which recognises past forced adoptions in South Australia. Relationships Australia and community members commissioned artists Christine Cholewa and Deb Jones to create the work. The memorial, funded by the South Australian Government and formally opened by Premier Jay Weatherill in July 2016, comprises a large square of Adelaide Hills black granite that has been carefully cracked in two, and a smooth, rounder stone for resting and contemplation.

The history of forced adoption

Forced adoption has taken many forms in South Australia, from the nineteenth century to today. Aboriginal children have been separated from their families since almost the establishment of the colony in 1836, and by the late nineteenth century the removal of mixed race children to missions and training institutions was commonplace, causing terrible grief for the children and their parents.

Under the Destitute Board from the 1860s, and the SA State Children’s Council from 1886, non-Aboriginal children deemed ‘neglected’ could be removed from their parents and placed either into state institutions or ‘adopted out’ into foster homes. Unmarried, abandoned or destitute mothers were treated appallingly by a system that blamed them for their situation and did little to support them. No effort was made to keep siblings together in care, and once they had surrendered their children, parents had little recourse to get them back.

In the twentieth century, thousands of unmarried mothers were tricked, coerced or bullied into surrendering their children to adoption agencies and care institutions. Closed adoptions meant that women had no idea what happened to their children, and children were unable contact their birth families. The impacts of these removals are felt by the children and parents for decades.

The project brief was to convey the grief and loss of forced adoption, the experience of both the mother and child. To quote the artists, the black granite rock is ‘a perfect metaphor for the gravity of the separation of forced adoption’. The crack shows the obvious separation of a whole, with the larger part of the rock representing the mother, the family and even generations.

Stone that has been together for generations is separated, the break line creating a beautiful mirror image of itself.

Acknowledgement of the past, a hope for the future

The artwork acknowledges both the practice of forced adoption, and the State Apology issued in 2012. The second part of the work conveys a hope for the future, for the ongoing conversations between those affected by forced adoption, and the sharing with people who are unaware of the practice. The sitting area is an integral part of the memorial and not just a seat. It is a place to create a feeling of the presence of others who have sat in this same place and who share this common experience. Over the years to come the smooth seat stone will be touched by people who have their own stories about adoption, and will create a powerful connection to others.

The artwork provides a safe space where people can think about and reflect on forced adoption, and learn and understand the depth of problems and heartache this practice creates. Parts of the artwork are highly polished, allowing the literal reflection of visitors, and forming a visual reminder to reflect on the actions of past and present adoption practices, to reflect on the experiences of those affected by forced adoption.

The dedication on the memorial reads:

This artwork is for all those whose lives have been profoundly affected by adoption separation practices – for the loss suffered by many, for the ongoing grief and pain experienced by Mothers who lost their children, and for Adoptees who lost their identity, heritage and family.

The Space Between raises awareness about the ongoing effects of adoption and separation, and gives the community of people affected by these practices a place to meet, support each other, to feel strong and to heal. 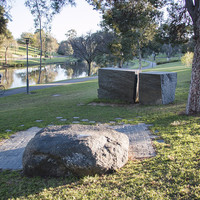 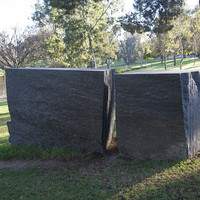