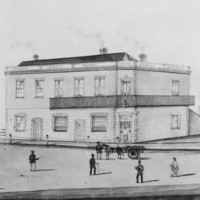 Construction of the Prince Albert Hotel

The Prince Albert Hotel was built in 1851 on the corner of Lowe and Wright Streets in the working-class neighbourhood of Adelaide's South West corner.
1852

Ludwig Dreyer was granted his license for the Prince Albert Hotel in June of 1852 after two unsuccessful applications. One of the applications was refused because it was ruled that the neighbourhood did not require an additional public house.
1898

Eliza Dreyer, manager of the Prince Albert Hotel and member of the Walkerville Co-Operative Brewing Company, died at Grandview on South Terrace at the age of 65.

The Prince Albert Hotel, built in 1852 is an example of a Victorian hotel and public house. Built on the corner of Wright and Lowe Street, it was associated with the Dreyer family, who originally migrated from Germany. It operated as a family business between 1852 and 1976. It also has connections with the South Australian Brewing Company and the Walkerville Co-operative Brewing Company.

The Prince Albert Hotel, named after the German consort of Queen Victoria, was built in around 1851. Unlike other hotels, the Prince Albert did not undergo extensive re-building during the construction boom between 1865 and 1885. The building was extended west along Wright Street and north along Lowe Street, and the building was refaced in the 1880s. The veranda was added in about 1890.

The hotel’s owner, Ludwig Dreyer came to Adelaide with his family in the early 1850s. He was granted a licence for his hotel in 1852, following two unsuccessful applications. Ludwig’s son and daughter-in-law, William and Eliza, took over the management of the hotel. Eliza continued to run the pub for another 30 years after her husband’s death in 1898 at the age of 58.

Eliza Dreyer is a notable example of a female hotelier in South Australia. She was the only woman in the syndicate of publicans who formed the Walkerville Co-operative Brewing Company (which was later absorbed into the Walkerville Brewing Company). Her two sons, Stanley and Gordon, owned and managed the Hotel Metropolitan on Grote Street. They were charged in 1909 for selling alcohol on a Sunday, to which Eliza reportedly said, 'Bad luck, but I would not tell a lie about it'. She was also active as a committee member of the District Nursing Association.  She died in 1926. The Dreyer family continued to own the hotel until 1976.

The Prince Albert Hotel exemplifies the pub culture of the nineteenth century, not only in being a local venue for the sale of alcohol, but also in having been a site for meetings and community organisations such as the Oddfellows. From 1855 onwards, it became a popular venue for public meetings for local council elections. 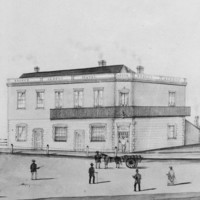 Image courtesy of the State Library of South Australia, SLSA: B 10432, Public Domain. 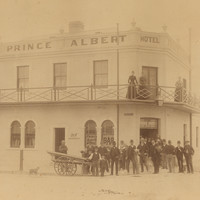 A photograph of the Prince Albert Hotel, taken in 1890 by Thomas Adcock
Courtesy of/Photographer:Thomas Adcock

Image courtesy of the State Library of South Australia, SLSA: B 10431, Public Domain.

Hi Diane,
Vedrana, who researched and wrote this article, had Dryer owning the hotel in 1952. It doesn't look like she established the owner when the hotel was built in 1951, so your family history research may fill in the gaps. Thanks for sharing!

According to family research (Dawes) the hotel was built by my great great grandfather Charles Dawes and his wife Elizabeth abt 1853. Charles sold his blacksmiths business for 110.0.0 pounds and built the hotel, shortly after he transferred the lease until 1861. Apparently he resumed the lease until 1870 at which time he relinquished it. I would be interested if this matches your family history.
Cheers
Diane

A fantastic family history Christine, thanks for sharing.

So thrilled to read my clever, very skilled and responsible 3x Great Grandfather Ludwig Dreyer honoured for his contribution to making S.A. great. He surely would be very proud of all his descendants involved with caring and improving the hotel Prince Albert. His three sons went on to wider fields and they too supported their new country.