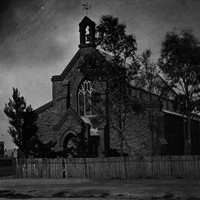 The foundation stone for St Luke’s Church on the west side of Whitmore Square was laid on 11 September 1855 by Governor Sir Richard Graves MacDonnell, assisted by the Anglican bishop of Adelaide, Dr Augustus Short. The bluestone building, designed by Edmund Wright and constructed by Thomas Hall, was consecrated on 14 February 1856. The land on which the church was built was donated by the Society for the Propagation of the Gospel in Foreign Parts.

In 1874 a rectory designed by EJ Woods was erected next to the church. The rectory was later extended and the church renovated and redecorated. In the 1860s a school room was added. In 1878 an organ built in Adelaide by Johann Wilhelm Wolff was installed in the church. Further additions to the complex and church were made in the 1880s and 1890s.

In April 1992 the church, including the organ, were destroyed by fire. St Luke’s was rebuilt with much community support, which reflected the long history of the church in the provision of social and welfare services such as accommodation and support to homeless youth.

A congregation continue to meet at St Luke's which remains part of the Diocese of Adelaide. St Luke's charitable works still include a number of programs with marginalised communities in the square mile of Adelaide. 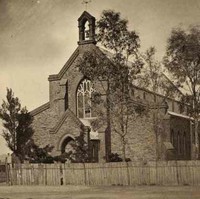 Image courtesy of the State Library of South Australia, SLSA: B 1026, Public Domain