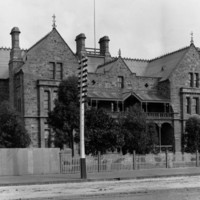 The first formal accommodation in Port Adelaide for visiting sailors was the Prince Alfred Sailors’ Home. Located on St Vincent Street, it was an imposing three-storey stone and brick building designed by architect Robert G Thomas, and bankrolled with donations from several notable South Australians, including Captain John Hart, Sir Thomas Elder, Sir Walter Watson Hughes and George Fife Angas. Construction commenced with the placement of the Home’s foundation stone by His Royal Highness Prince Alfred, the Duke of Edinburgh on 18 February 1869; however, because it was located within the intertidal zone on land that had only been partially reclaimed, the structure suffered severe subsidence as building works progressed. By the time the walls were erected, the foundation had settled approximately 19 inches (0.5 metres) into the sediment upon which it rested. The subsidence problem delayed completion of the Home until 16 January 1875, when it was officially opened by Governor Sir Anthony Musgrave.

When it first opened, the Home featured 38 dormitories on its ground floor, 25 of which were furnished. Other amenities, including a dining room and reading room, were also located on the ground floor. The upper floor was initially vacant, but later accommodated a single large dormitory. Combining ‘business with benevolence’, the Home’s administrators originally charged sailors a ‘moderate’ fee for their room and board, and petitioned the Port Adelaide community for donations to cover operating and management costs. They also created a provision for imparting religious instruction and moral guidance in an effort to foster ‘self-respect and [a] sense of responsibility’ among the Home’s patrons.

Changing use of the site

In 1880, the Prince Alfred Sailors’ Home began hosting the ‘Port Adelaide Nautical Academy’, an organisation that prepared students for Marine Board examinations and a career aboard ships. It was run by the Home’s secretary, Captain William Powell Lee, and instructed countless navigators, masters and mates. Lee ran the school until 1924, when he retired due to illness. In October of the same year, the Home was sold to Port Adelaide shipping engineer PH Martin, who bought it as a ‘private speculation’. It was probably just as well: the Home was never very popular with visiting mariners, who frequently criticised it for its ‘bleak’ and ‘austere’ accommodation, and objected to ‘the strictness of [its] rules’.

The Prince Alfred Sailors’ Home building was subsequently used as a boarding house that closed and reopened several times until 1929, when the business finally folded. It was left to fall into a state of disrepair, and, in an ironic twist, occasionally used to house foreign seamen whose ships were being fumigated. In 1932 Martin sold the building at auction and it was demolished shortly thereafter. During the demolition process workers discovered a cavity beneath the foundation stone that contained several intentionally placed mid-nineteenth century artefacts, including two bottles, a handful of coins, and copies of the Advertiser and South Australian Register printed on 18 February 1869. 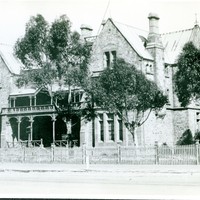 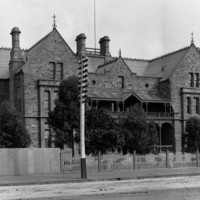 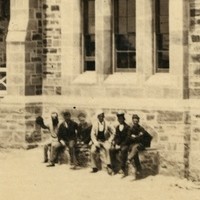 Image courtesy of the State Library of South Australia, SLSA: B 10737, Public Domain 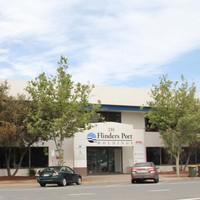 That’s amazing Catherine! Thank you so much! Will do :)

Hi Jess,
happy to talk - drop us a line at sahistoryhub - at - history.sa.gov.au (replacing at with @, no hyphens or spaces)

Unfortunately James, who researched and wrote this article, is no longer working with us, but if you're looking for more information we can put you in touch with some likely sources.

Hello
I am currently listening to a tape of my grandfather, who is talking about his Grandmother and parents involvement in running the home for sailors. I have a little booklet too which lists ships, and costs or charges. I am not sure if it is related to the boarding house or my great grandfather's wages as he worked as a bosun in Port Adelaide.
Would love to talk to you about this if you are interested at all.
Many thanks
Jess