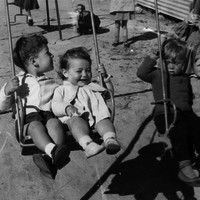 Mallala migrant hostel was administered by the Commonwealth Government.
1951

Country towns like Mallala in South Australia were a completely new landscape for Displaced Persons arriving from Europe. The heat and the dust made a big impression on new migrants.

A portion of the existing Royal Australian Air Force camp at Mallala was converted for migrant accommodation in 1950. Nine huts were divided into small sections for sleeping quarters, with larger areas allocated in separate huts for a kitchen and other communal facilities. The buildings were long barrack-style structures, oblong in shape, several of which can still be seen in Mallala today.
The Air Force continued to operate out of the camp at the same time that migrants were housed on the site. This, along with the isolation of the camp and the lack of infrastructure and facilities, proved challenging for residents and management alike during the short life of the hostel. There were concerns about the absence of fencing around the active runways and landing field because small children were among those housed at the camp.
Roads and pathways were unsealed, and the threat of bushfires was alarming for new residents. One of the major issues at the Mallala centre was the inadequate power supply. There were regular blackouts and a local electrician was on call.
Inspector for Migrant Centres, Mr AB Basset, visited in October 1950. He praised staff for preparing the centre quickly for residents, but highlighted the problems of the site. Apart from the unsealed roads, the threat of bushfire and the inadequate power supply, his report also notes the need for blinds on north-south facing huts, the lack of play equipment for children, and the limited capacity of the local schools to meet the needs of the migrant centre. The 'Now and Then' wiki documents the history of the town of Mallala, including the hostel. A cairn recording the history of the site, including its use as a migrant hostel, now stands at the entrance to the race track. South Australia is dry.

As the Air Force used to say 'Dusty old Mallala', and we were in the hut, the boys and I. There was an airfield, looking north ... They were all barracks out there. Christiane Boril, Mallala 1950, interviewed 2010

Mallala operated as a holding centre for women and children while men were sent elsewhere for work. Residents were Displaced Persons from Europe, and it seems that discomfort over having 'new Australians' from countries so recently at war with Australia and its allies living close to an active military base contributed to the closure of migrant accommodation on the site. At its peak Mallala appears to have housed around 350 migrants, though there were reports of an expansion to house a further 240 residents.
Transport was essential in such an isolated location, and residents who could not purchase a car or motorbike were reliant on making friends with people who were willing to give them a lift. It was possible to visit the township of Mallala, and some residents of the hostel were able to make connections with locals, though language was sometimes a barrier.
There was some social life at the hostel itself. Former residents remember films, and in December 1950 the Junior Red Cross held a Christmas party for children at the hostel.
When accommodation at Mallala was shut down some residents were moved to Gawler to ensure families could stay near men working at Islington and other sites in Adelaide.
There is mention of the history of the migrant hostel, including related information from former resident Christiane Boril, on display at the Mallala Museum. 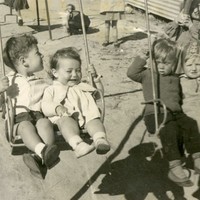 The cooks were incredibly important part of the airforce and hostels!

Thanks for sharing Florin,
Sounds like an amazing experience, and how wonderful to own such a special piece of history.

I remember going to my first RAAF airshow at Mallala in the mid 1950 and watching the fighters and transports doing there flying stunts. I was so moved by the flying that I joined the RAAF in 1968 and and was discharged 20 years later. I still have a lovely Aircraft called the "Sugar Bird Lady" which I have flown now for over 20 years. VH-REM. She has a bit of Australian history to her and was owned by a famous Female Pilot called Robin Elizabeth Miller. Cheers Florin Clej

My Father "Traian Clej had stories about living at Mallala, he became a cook at the Airforce Mess and cooked up some well presented Romanian types of dishes.

I was born in July 1951 in the Hostel Hospital.