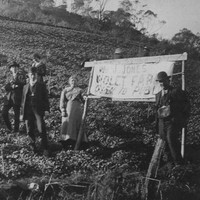 The Jones’ Violet Farm was along the lower end of the Old Norton Summit Road, on the northern side of the roadway opposite Third Creek.  There were two violet farms in close vicinity along the Norton Summit Road, Third Creek, Magill (Walker's and Jones'), and Charabancs loaded with people from Adelaide arrived on weekends to buy and pick violets. Margaretta Jones and her daughters ran a small stall from the farm and sold fresh farm produce from a galvanized iron building built on the farm near the roadway. A painted, canvas banner bore a sign marked 'Wm. J Jones Violet Farm'.

Those fragrant hills, those tinted slopes

Where hopes unfolded and memories grew ...

Violets and other produce

The farm was a small, mixed farm with a small herd of dairy cows and an orchard that grew apples, pears, plums, cherries and cut flowers and roses. William Jones' specialties were in his apple and cherry orchard and in raising violets for the Adelaide cut flower market and for sales at the farm. He also produced grafted, standard roses. He gathered a wide collection of varieties of violets from importers and cultivated them on the terraced slopes of the farm, which he opened to visitors during the flowering season. His violet varieties included King Violets (the main cut flower crop), Blue Violets, Double Violets, White Violets, Variegated Violets and Common Violets.

Stories of Jones’ Violet Farm are strong in the family. Lydia Anderson née Jones [the author's mother], was born and raised there and, with her cousin, Edna Luxton née Green, picked bunches of violets for customers at sixpence a bunch, all under the watchful eye of their grandparents, William and Margaretta Jones.

William James Jones married on 27 June, 1895, at the Church of The Nativity, Finniss, South Australia, Margaretta Bowden-Tatchell, b. 04 Aug., 1873, Redruth, Cornwall.  They were the first couple married at that church and were presented with a black, leather-bound KJV Bible, inscribed to commemorate the event.

To the violet farm

William and Margaretta lived at Moonta Mines, South Australia, between 1895 and 1897, while he was working at the copper mines. Their first two children, Jane Elizabeth and Ethel May, were born there. Henry George Jones (b. 28 Feb 1899) was born at Broken Hill, New South Wales, where William may have been working in the mines or as a carter in that area after tending to his late father’s affairs there. Robert Powell Jones was also born at Broken Hill (b. 08 Jun 1900; d. 1901, Broken Hill, New South Wales). In February 1903 another son, William James Jones, was born on  20 Feb 1903, at Broken Hill, New South Wales. After William Junior’s birth William and Margaretta moved back to South Australia and eventually settled at Third Creek Magill on the Violet Farm. Their youngest son, Herbert Cecil Jones, was born there on 08 Oct, 1912.

Thus by 1912, William and Margaretta Jones had established their family at the Violet Farm, at the 146-acre property comprising Section 1103 and part Section 915, at Third Creek Magill, from where he ran a mixed farm, producing milk, fruit (especially apples, pears, plums and cherries), vegetables, roses and violets. The farm was initially leased from Mr I Dwyer who was proprietor of the farm prior to 1883 when it was first listed for sale. When the Jones family settled there it was a full bearing farm with running water and fronted the Main Eastern Road (later to become the Norton Summit Road) and violets and lilies were already established cut flower crops.

In 1918 Jones purchased the property from Mr I Dwyer and they lived there working the farm and for neighbouring orchardists, until his death in 1929. It was known as Violet Farm at the beginning but Jones named it Variety Violet Farm sometime after 1915. To the family it was simply 'the Violet Farm' and home.

The importance of Violets

From 1915 to 1929, Violet Farm was a supplier of violets for the First World War remembrances on Violet Day from 2nd July, 1915, Adelaide. Newspaper reports in 1917 stressed the significance of the violet as 'the symbol of perpetual remembrance for those gallant dead who have given their lives for their country.' After the war Violet Day continued to commemorate those who fought in the war and died either on the battlefield or from injuries of war. In 1928 the day had moved to August, to the Sunday nearest the date that war had been declared. Churches held special services. The 56th and final observance of Violet Day was held on 2 August 1970.

With commemoration of Violet Day being recognised as a significant feature of early twentieth century Adelaide, it is fitting to give recognition to those who gave new heart to an older enterprise- the raising of violets for sale. William James Jones may not have been the first farmer of violets but his farm was the site of pioneering commercial violet growing at Third Creek, Magill, South Australia.

Life at the violet farm

Neighbours to the Jones Farm included Major Hutchison, Messrs S Emery, and A L Walker, the Horsnells (of Horsnell Gulley) and the Playfords (who lived at Norton Summit).  My grandmother, Jane, the eldest of the Jones children, frequently told the story of her childhood contact with Tom Playford, South Australia's Premier of later years, the child of a cherry grower. Jane, Ethel, Henry and young Bill would hitch a ride to Magill Primary School with Tom on a Playford wagon or walked the long distance to the school when the Playford transport was not available. Later, the younger generation of children from Violet Farm often made the same trip by cart. The group included Lydia, Edna and their Uncle Herbert Jones who was only four years older than the girls and their reluctant chaperone. Once he was chastised by a passing neighbour who urged him to help his little sisters jumping from a cart. His reply earned him a lasting sobriquet, “I ain’t their brother, I’m Uncle ‘Erbie!

The girls were also prone to lapses of judgement and often recalled the Christmas Season when they helped themselves to their grandparent’s cherry crop and climbed into the sulky to eat them, presuming themselves unobserved. That evening their grandfather enquired at the dinner table which of the children had been nicking his cherries. When the girls replied in an innocent chorus that it was not them, Jonsey remarked stoically, 'Well next time don’t spit your cherry stones around my sulky!'

There was much to keep the children engaged, for William and Margaretta Jones also ran two, seasonal Produce Stalls. One operated from Violet Farm, serving on days when the farm was open to the public for picking the violets. It was a very popular venue, with loads of people being carried there on Charabancs from Adelaide or travelling by motor vehicles or horse-drawn vehicles to pick or buy violets, buy sweets, fruit and other fresh farm produce and take Devonshire Tea, served with Margaretta's home-made scones, jams and cream from the farm. There were always sixpences to be made by the more enterprising of the Jones children who were skilled at picking and bunching violets for visitors who refrained from picking them for themselves. From Lydia and Edna, of course, there was always a special bunch for the charming young policeman (one of the Horsnell boys) who attended to help with traffic control.

The second stall was at Semaphore Beach, where a beach-front stall was established on weekends during the summer months and during carnivals, selling fresh farm produce, teas, scones and home-made jams. William and Margaretta and their family made the trip from the Violet Farm to Semaphore each day when the stall was open and maintained a very busy schedule in travelling, cooking and preparing sales.

The Violet Farm was a happy home, a common gathering place for the extended family, so that Jane and Ethel's children were frequent visitors to their grandparents' home in the years to 1929. However the farm was not without tragedy.  A newspaper article in 1922 related that Mr William J Jones of Violet Farm, Magill, was involved in an accident at Port Road when a motor vehicle collided with his sulky. Margaretta was blinded by a cow charge, in 1924, at age 46 yrs, and her daughter, Jane, lived at the farm until 1931, caring for her.

The Violet Farm survived three periods of drought during Jones’ time (April 1902 - May 1903, 1911–1915, 1918 - 1920) and dry summers brought threats of bushfires. On Friday, 1 January, 1926, the farms along Norton Summit Road were threatened by a bushfire, including the Violet Farms, where fences and pastures were destroyed. Again, on Friday, 1 March, 1929, a fire destroyed 100 acres of Jones’ property and damaged feed and briar plants as a raging fire swept up the slopes. Fortunately 1,000 fruit trees, 30 cows and most of the Violet Farm, the homestead and its furniture were saved by timely action by Jones and neighbours who came to fight the fire. Losing his briar stocks greatly affected his rose grafting work and was a set-back for him. William James Jones died four months after the fire.

After William's death, in July 1929, Jones' Violet Farm was worked by his sons but it could not support all of their families. Henry and Bill worked for Tom Playford on his cherry orchards. Margaretta Jones sold Violet Farm in 1931 to Ernest Samuel Dainty, a horticulturist. The farm house still stands as a private residence (2015) and the terraced, lower slopes of the violet field can still be traced.

The author has drawn on extensive family history research of William and Margaretta Jones, and includes family narratives and memories in this piece. 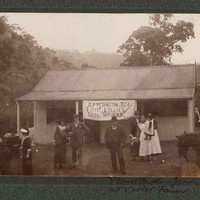 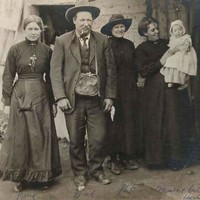 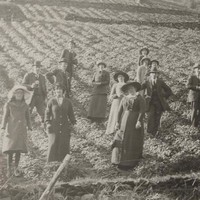 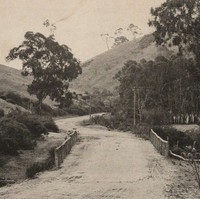 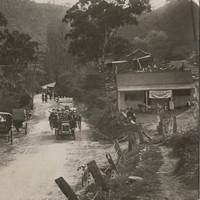 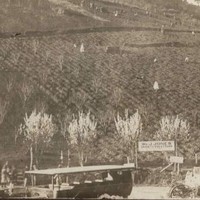 No problem Terrie, we worked out it was a typo. I can edit it for you if you like.

Thanks for adding this Terrie.

Very interesting. William and Elizabeth were my great grandmother's parents and William James her nephew. Good to see some of the Jones Family history in print. As you probably know Thurza Jones married Walter Mugg the grandson of Thomas Mugg Mitcham's first School Master who came to South Australiaon the infamouis "Planter" in 1839, and I understand that Playford was one of his students.

Thanks Christine, we're also really please Welwood has shared the family history. It's great information to have, and the family photos are wonderful.

So proud of my brother for 'putting pen to paper' to write
the story of our family contributing to S.A.'s history. A plaque was erected earlier this year on the properties at Old Norton Summit commemorating 100 years for Violet Day.

So proud of my brother for 'putting pen to paper' to write
the story of our family contributing to S.A.'s history. A plaque was erected earlier this year on the properties at Old Norton Summit commemorating 100 years for Violet Day.