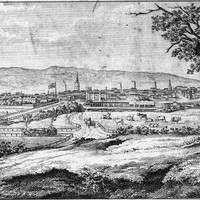 The sale of town acres begins

The opening up of country areas for settlement and the beginning of the sale of town acres caused many settlers to leave the square with new arrivals taking their place.
1849

faced with on-going poverty, the government established a Destitute Board. Until 1851 the board continued to use Emigration Square, despite its squalor, but then replaced it with a purpose-built Destitute Asylum off North Terrace near Government House.

Early in 1837 many of the 1000 pioneers moved their tents, goods and chattels from the Holdfast Bay sandhills to Buffalo Row and Coromandel Row, named for their ships which arrived in December 1836 and January 1837, respectively, and, soon after, Emigration Square. The hotchpotch of canvas tents and make-do dwellings of mud and grass, saplings and river reeds near the River Torrens was west of the junction of North Terrace and West Terrace. The emigration agent, who oversaw the assisted migrants’ welfare, accommodation and employment, had his office and infirmary there. After the sale of town acres began in March 1837 and the opening up of country areas, many settlers left the square and new arrivals took their place.

While by the 1840s migrants were allowed to stay on their ships for a fortnight to find housing and work, from the late 1830s destitute colonists lived in the square under the emigration agent’s supervision in return for rations, constructing over 30 makeshift wooden huts as accommodation. By 1842 around 2000 men, unemployed from illness or injury, and women and children without a breadwinner had received assistance. During the 1840–42 financial crisis they included unemployed able-bodied men who laboured on public works for rations and basic wages. In 1849, faced with on-going poverty, the government established a Destitute Board. Until 1851 the board continued to use Emigration Square, despite its squalor, but then replaced it with a purpose-built Destitute Asylum off North Terrace near Government House. 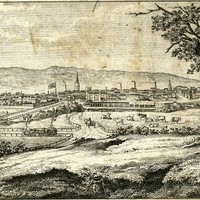 Burgess, HT (ed.), The Cyclopedia of South Australia in Two Volumes: An Historical and Commercial Review, Descriptive and Biographical, Facts, Figures, and Illustrations: An Epitome of Progress (Adelaide: Cyclopedia Co., 1907–09)