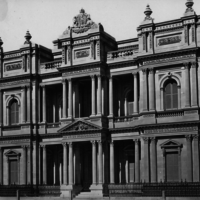 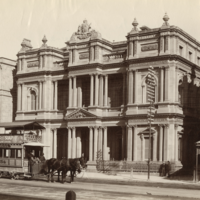 Construction of the Bank of South Australia Headquarters

Ceased Operation as a Bank

Led by Charles Wright and the ANZ Preservation Committee
1971 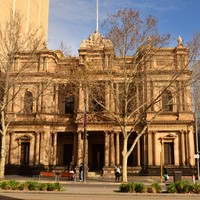 First tenants the Registrar of Births, Deaths and Marriages
2016

Since the departure of Migrant Resource Centre, the future of the building is unclear

Edmund Wright House was built in 1878 as the headquarters of the Bank of South Australia. In the early 1970s plans were made to demolish it and replace it with a modern office building, in spite of its heritage value. Public outcry convinced the State Government to purchase and restore the building, and to officially rename it after its local architect.

Construction of the Building

The Bank of South Australia was founded in 1837 by the South Australian Company to allow for the transfer of capital between London and the new colony. It purchased the land on King William Street in 1866 for £10,000, but was unable to begin construction of a new headquarters immediately. By 1874, the Bank was financially successful enough to invest in a grand new building. It held a competition for designs for this new construction, with first place offered £200 and runner-up £100. The popular form of architecture at the time was evidently Italianate, as all but one of the thirty submissions were designed in this style. The winning design was submitted by architects Edmund Wright and Lloyd Taylor, and was duly approved by the London Court of Directors.

Construction of the Bank’s new headquarters was undertaken between 1875 and 1878. The complete cost amounted to £30,998 7s 6d. Upon its completion, it was hailed as a great success for both the Bank and the colony itself. Newspapers marvelled over the fact that only four decades prior, the Bank operated from a tent. South Australia’s economic progress was seen as embodied in the extravagance of the building’s façade and its modern technological advancements.

The Italianate style gave prominence to grand columns, but the façade of the Bank office facing King William Street was particularly ornate. There is an apocryphal story that Wright and Lloyd’s plans were returned with a request to double the cost and make it even more elaborate. Famous British sculptors William Maxwell and Joseph Durham travelled to Adelaide to carve marble ornamentation. Some of the most notable carvings are the faces of Minerva, Mercury and Winter over the keystones. The centre is topped by the Bank’s coat of arms, comprising of a lion and unicorn in front of a shield and capped by a crown.

The interior furnishings were hailed at the time as the peak of modernity. The South Australian Register explained the workings of a new form of banknote sorting table: ‘The tops are made like trays, and have covers which close with a spring, so that the clerk who is working at one and is suddenly called away can on closing the lid leave it with perfect security’.

The South Australian Chronicle and Weekly Mail was similarly impressed with the layout of the building: ‘The arrangement of iron doors is such that the burglar’s vocation, as far as this building is concerned, is at an end’.

The building also contained what is thought to be Adelaide’s first passenger lift. The hydraulic contraption was designed to haul 3 hundredweight (about 150kg). The manager lived onsite in the upper floor, with a private back entrance. This residence included well-furnished dining and drawing rooms and a private library.

The premises continued to operate as a bank, throughout the multiple mergers, until 1968. In late 1970 ANZ sold the building to Mainline Corporation, a Sydney construction company, for around $500,000. The plan was to demolish the building and replace it with a modern 19-storey office block. This decision was immediately controversial, as the bank headquarters had been listed by the National Trust as an ‘A’ level building, which meant that it was considered amongst the most important heritage buildings in the State. Yet, an appeal by ANZ claiming that it was economically impossible to justify maintaining the building in its current state was allowed by the Hall Government, which meant that the building was delisted. The local Adelaide City Council did not have any legal authority in this matter, and avoided getting involved in debate. Membership of the National Trust itself was split on this issue, not least because the President of the South Australian National Trust, Dean Berry, had a financial interest in the demolition: he was the architect who designed the replacement building. In contrast Justice Moore, the Chairman of Australian Council of National Trusts, declared it imperative to save the bank. Regardless of the National Trust’s ambivalence, with ANZ’s appeal allowed there were no legal barriers to the demolition of the building.

Public discontent over the destruction of such a prominent and elegant component of Adelaide’s city centre began to grow. At the centre of the campaign to save the building was local optician Charles Wright (no relation). As Co-Chairman of the ANZ Preservation Committee, he worked tirelessly to advocate for the protection of the former bank building. Edmund Wright, who had long-since left public consciousness, was hailed as ‘the Christopher Wren of Adelaide’. His prolific works as a local architect were emphasised, and his skill and importance compared to that of Palladio. Charles Wright boasted that it was ‘one of the most perfect buildings of its kind in the world’. In spite of this campaign, the Dunstan Government claimed that it had no power to stop a private land sale and construction.

By late March 1971, the tide seemed to turn against Mainline’s plans. A total of 67,000 people, led by the ANZ Preservation Committee, protested against this decision, raising $250,000 in a public appeal to purchase the building. By August, with the building now nationally-famous (a report claimed it was still Adelaide’s most famous building in 1981), the State Government announced that it would purchase the former bank for $750,00. It was formally purchased in November, and shortly afterwards the Government announced that it would restore the building to its former glory. This became controversial when Dean Berry was selected as the overseer of the reconstruction, after previously designing the building’s planned replacement. The Government felt that irrespective of this fact, Berry was the most qualified individual for the job. Apart from the required retouching of the carved marble façade, one of the major elements of the restoration was the recasting of interior plaster decorations. Fancy leaf motifs on the walls ‘were the victim of overzealous dusting’ and the ceiling works had been destroyed by the installation of fluorescent lighting. By all accounts, the work overseen by Berry was commendable.

In celebration of the restoration the building was renamed Edmund Wright House, in honour of its Adelaide designer. Critics have argued that this naming scheme does a grave disservice to Melburnian co-architect Lloyd Taylor, who was at least equally involved in its design. They have claimed that in the frenzy to save the building, Wright was mythologised to an unreasonable degree, not least because most of his prominent buildings were co-designed by architects who the public does not recall. Irrespective of these criticisms, however, the legacy of Wright is still apparent across Adelaide.

One of the longer term effects of this public debate over the importance of built heritage can be seen in the development of State legislation later that decade. When the Foy and Gibson’s Department Store on the corner of Rundle Street and Pulteney Street, built in 1911 as the Grand Hotel, was demolished in 1976, the State Government announced that the continued purchase of heritage buildings was economically unsustainable. While public sentiment was not as fervent as with Edmund Wright House, the destruction of one of Adelaide’s most impressive buildings was still held as a tragedy. As a result, in 1978 the State Parliament passed the South Australian Heritage Act which granted considerably more legal protection for buildings of historical significance. Through the 1980s, Adelaide gained a national reputation for a dedication to heritage preservation.

Since its restoration, Edmund Wright House has been home to a number of State Government organisations. The main hall was frequently available for public hire for special events. The first and longest-lasting tenant was the Registrar of Births, Deaths and Marriages. Moving in in early 1973, they lasted until 1995. From 1995-2003, the building was occupied by the History Trust of South Australia, having previously operated from Old Parliament House. The most recent tenant of the building was the Migrant Resource Centre, which vacated the premises in 2016. Since then, the building has been unoccupied with an unclear future. 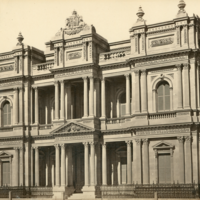 Image courtesy of the State Library of South Australia, SLSA B 10670, Public Domain. 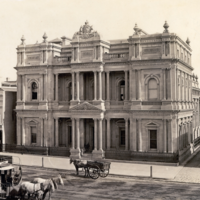 Image courtesy of the State Library of South Australia, SLSA B 2534, Public Domain. 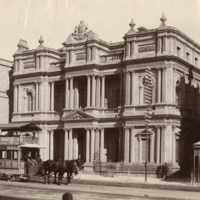 Image  courtesy of the State Library of South Australia, SLSA B 43000, Public Domain. 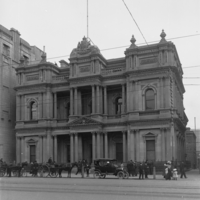 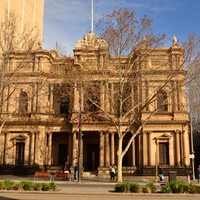 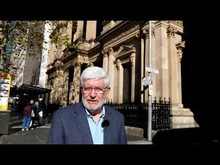 Hi Graeme,
my understanding is that the building was sold earlier this year. It is listed as a State Heritage property on the SA Heritage Register - https://www.environment.sa.gov.au/topics/heritage/sa-heritage-register

It is Friday 27 Dec 2019 and I am irked over the ''vision'' by someone in employ of SA Government [or maybe someone within the actual government political party at the time] that they see the unique building that was named ''Edmund Wright Building'' and opened for business at 9am on Tuesday 2nd January 1970 as the office of Births Deaths and Marriages... which at 9.15am saw Lorraine and I had become the First Woman and Man to be Married in the Building by Eric Byerlee. This is an important heritage building and I do not care what any government official says... cost plays no part in this... this is all about preserving our Heritage. SA Government OR at the very least the City of Adelaide, MUST occupy the Building on behalf of South Australia. What must we the people do to ensure the Building is owned and occupied by government?? Graeme McVitty. EMAIL Address : southaustraliaproud@yahoo.com.au

Butlin, SJ, A Brief History of the Bank of South Australia, 1961.