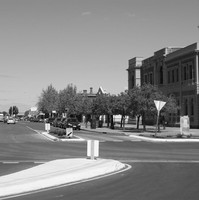 Construction of Commercial Rd began on 25 may 1839 when Governor Gawler turned the first spadeful of soil. Gawler had arrived in the colony eight months earlier amid fierce debate about the best site for the Port of Adelaide. His predecessor,  Governor Hindmarsh's  obstructionist stance toward improvement of the Port had ultimately led to his removal from office.

The inital location for Port Adelaide chosen by Colonel Light, but opposed by Hindmarsh had the benefit of having high ground, but the river was too shallow for large vessels to unload. Captains resorted to time consuming and expensive ferrying of goods and passengers in lighters (small boats). Increasing numbers of ships - nine in 1836, fifteen in 1837 and thirty in 1838 - exacerbated the problems at the Port and public debate intensified.

Gawler succeeded in a finding a solution where Hindmarsh had not, brokering a deal with the South Australian Company, who would assist the Colonial Goverment to build a new road and wharfage in return for prime waterfront land - a situation unique among Australia's colonies.

The road took 17 months to build, twice as long as planned, and cost £30,000. Royal Sappers and Miners worked alongside colonists employed as labourers. Crossing sand hills and tidal flats the road was raised on a causway made from ballast, that stretched from Alberton to the waterfront. Land at the waterfront was also raised and timber piles driven for the new wharves. The road and wharfages were offically opened by Governor Gawler; on 14 october 1840, in front of 6000 colonists, the largest crowd that had gathered for a public event in the colonies short history.

Over time the land reclamation spread, the causeway, dunes and swamps that it crossed have been replaced with a flat expanse that stretches from Alberton to the Port. 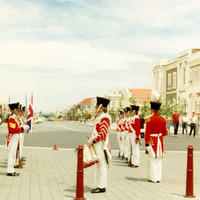 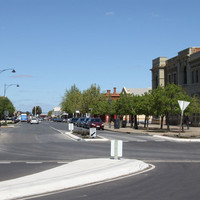