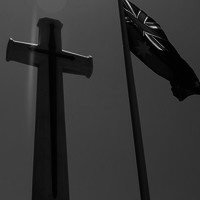 The Cross of Sacrifice was unveiled on the 12 October 1924, the first to be erected within an Australian burial ground.
1944

In November 1944 the cemetery was extended to its current size of four acres. The new addition was named Kendrew Oval after long-serving Chairman Reverend GW Kendrew.
c. 1960

In the 1960s the cemetery was renovated. The renovations included placing the headstones upright into concrete plinths, re-turfing and the instalation of a new sprinkler system.
1994

The cemetery was closed for burials in 1994. Currently it is the resting place for 4167 ex-service personnel.
The Australian Imperial Forces (AIF) Cemetery was established following protests in February 1920 against the State Government from the League of Loyal Women, who campaigned against the treatment of over 150 returned soldiers buried in unmarked graves at West Terrace Cemetery.
Following the protests, the State Government agreed to allocate a quarter of an acre of land in West Terrace Cemetery for the establishment of a Garden of Memory. The cemetery would become a reality a few months later with the first burial taking place on 23 May 1920. Exclusively for the burial of ex-service personnel, it was the first dedicated military cemetery in Australia.

The graves within the cemetery, following the Commonwealth War Graves Commission's guidelines and belief that all soldiers should be honoured equally, are marked with uniform white marble headstones, 81cm in length, 38cm wide and 8cm thick, engraved with the AIF symbol. The headstones, lined in rows and placed horizontally across each grave, also contain the soldier's unit badge, number, name, battalion, place and date of death, age, a symbol of their faith and a family tribute. The unit badges, the only colour on the headstones, are rarely found in Australian war cemeteries.

The Cross of Sacrifice, officially unveiled on 12 October 1924, was the first to be erected within an Australian burial ground. Designed by one of the Commonwealth War Graves Commission's architects,  Sir Reginald Blomfield, the Cross is made of Angaston marble and decorated with a bronze crusader sword. Costing £1500, a gift from the Commonwealth Government, and  standing 10.4 metres high, it dominates the cemetery landscape from its prominent position in the centre of Light Oval.

After it was erected, the Cross, covered by both the Union Jack and Australian Flag, was unveiled by the Governor-General Lord Forster in a ceremony at West Terrace Cemetery. He remarked in his speech:

As the years roll by...and as other generations pass hence, all the pain and the suffering and the sorrow of the Great War will vanish, and there will remain nothing but the fame and glory of the great deeds grandly done. Then shall this noble cross remind men of what we owe to those who lie buried here, and thus will it inspire successive generations with the same splendid spirit of service and self-sacrifice, which it commemorates. (The Observer 18 October 1924, p 31)

Extension and reorganisation of the cemetery

The cemetery, by 1924, contained the graves of 157 returned personnel within its quarter of an acre boundary. To accommodate more burials, It was extended in November 1944 to its current size of four acres. The new area, located directly behind Light Oval, was named Kendrew Oval after long-serving Chairman Reverend GW Kendrew. In the 1960s the cemetery was renovated and reorganised to its current arrangement. During these renovations, the headstones were placed upright into concrete plinths, new turf was laid and a new sprinkler system was put in place. 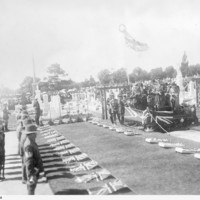 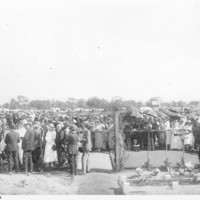 Dedication ceremony for the WWI memorials, 1923 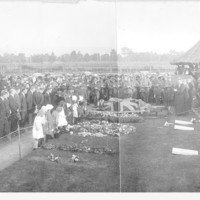 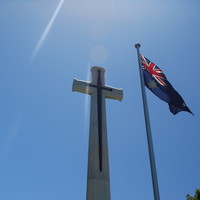 Nicol, R, At the End of the Road: Government, Society and the Disposal of Human Remains in the Nineteenth and Twentieth Centuries (Sydney: Allen and Unwin Press, 1994)

The Observer,  18 October 1924, 'And their Name Shall Live for Evermore -- Cross of Sacrifice Unveiled at Soldiers' Cemetery',  p 31