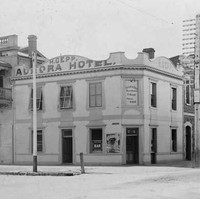 The Aurora Hotel which opened in 1859 on the corner of Hindmarsh Square and Pirie Street in Adelaide as the Black Eagle, was immediately patronised by the German community. It was renamed the Aurora in 1894. In the early 1980s the Adelaide City Council promoted a plan for the redevelopment of the town acres east of Hindmarsh Square; the landowners, AW Baulderstone Pty Ltd, obtained approval to demolish the Aurora Hotel. Because of the building’s history and architectural contribution to the surroundings, what followed was probably South Australia’s most strenuous campaign to save a historic building, involving union bans, court injunctions and a month-long picket by an action committee. The campaign failed, and the Aurora was demolished on 1 December 1983, to be replaced by an undistinguished commercial tower block. The loss of the hotel was a watershed in heritage conservation in Adelaide, leading directly to the formation of Aurora Heritage Action, a vocal lobby group for the next 11 years. The fact that the hotel was not on the five-year-old State Heritage Register disillusioned many people, and increased pressure for councils to have their own local registers. The incident politicised heritage and led to closer public scrutiny of the Adelaide City Plan and the council’s links with property developers. 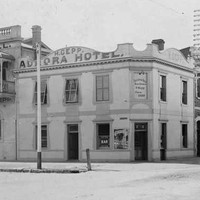 The Aurora Hotel at the north-east corner of Pirie Street and Hindmarsh Square, May 1912
Courtesy of/Photographer:Francis Gabriel 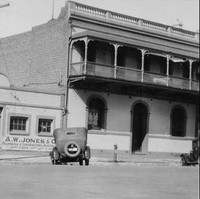 The Aurora Hotel and premises of the Mile End Bag Co., 23 August 1935. The Aurora Hotel is the two-storey building on the right
Courtesy of/Photographer:State Library of South Australia