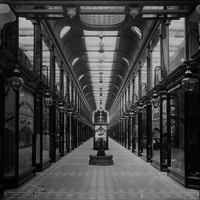 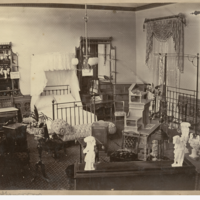 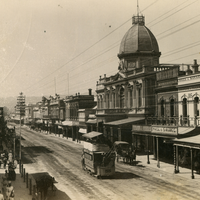 Champagne fountain outside the Arcade
1980

Significant structural damage due to fire

Inscribed on Register of the National Estate shortly afterwards

Adelaide Arcade was opened in 1885 and was hailed as the most modern shopping precinct in the Southern Hemisphere. With its prominent position between Grenfell Street and Rundle Street (subsequently Rundle Mall) it has continued to be a popular shopping hub to this day.

The early 1880s were a time of economic boom in South Australia, and the area around Rundle Street was established as the commercial hub of Adelaide. As such, when the adjacent properties of Mr Gay’s Furniture Warehouse and Barker’s and Chamber’s Horse Bazaar burned down in 1884, the owners decided to replace them with a grand new shopping arcade in the most modern style.

The building was designed by Latham Withall and Alfred Wells, contemporaneously with their celebrated design of the Jubilee Exhibition Building. The Arcade’s most prominent features are the domes at each entrance. These domes are decorated with an unusual version of the Australian Coat of Arms. While an official coat of arms was not adopted by Australia until 1908, almost 25 years after the construction of Adelaide Arcade, multiple competitions had been held by that point to design one. The designers of the Arcade chose the example that they thought was most likely to win, but did not in fact manage to guess correctly. While the Arcade’s Arms bears a great resemblance to the eventual national design, the kangaroo and emu are actually on opposite sides.

The Arcade’s foundation stone was laid on 6 May 1885 by Adelaide Mayor William Bundey. Even at this early point, there was an acknowledgement that Adelaide was falling on hard times, as the Mayor expressed his hope that the construction of this new retail locale was a sign of imminent economic revitalisation.

In August 1885, it was announced that the Arcade would be extended to the east in the form of Gay’s Arcade. This new arcade was designed by James Cumming, a prominent Adelaide architect, in an Italianate style. While theoretically a separate building, it has in practice been subsumed into Adelaide Arcade for shopping purposes. Claims that the entire structure would be completed by 1 December were ridiculed by the public. While this lofty target was indeed missed, it was only by less than two weeks. Contemporary writers marvelled that this deadline was only overshot by the unfortunate delay of a shipment of lamps.

On 12 December 1885, Adelaide Arcade was officially opened in a ceremony led by Governor Sir William Robinson. Rundle Street was closed to traffic and was crowded with the public hoping to get a view of the ceremony. The police presence was strong, as there were fears that unemployed men might start a riot. These fears seemed briefly founded when the crowds loudly booed the arrival of the Governor, but they calmed down once he was inside. The ceremony was relatively informal, and is remembered today mainly for its performance of the Adelaide Arcade Polka, a musical piece composed specifically for this day by Signore Raphael Squarise. This song can be heard today at the on-site museum of the Arcade. Speeches given at the time were optimistic that the successful construction of the Arcade represented an bright economic future for South Australia. The Governor was once again booed upon his exit from the ceremony, leading one newspaper to decry that ‘[i]t is rarely that South Australian assemblages show such bad taste’. Upon the ending of the ceremony, thousands of members of the public thronged through the Arcade, marvelling at the modern wonder of electric lighting.

The Arcade itself comprised 50 shops, each with an upper level workshop accessible by an interior staircase. The building was made of 2 million bricks, as well as 50,000 panes of glass so large that they needed to be specially made and shipped from London. The Arcade was one of Adelaide’s first buildings to utilise electric lighting; the electricity was generated by a large engine held in one of the storerooms. Sixteen lamps along the central corridor lit the entire Arcade. The floor was tiled with Carrera marble. The highlight of the building was the Turkish baths, set in the south-eastern corner. Designed with Orientalist luxury in mind, a ‘normal’ warm bath cost one shilling, while a full Turkish bath cost four. The initial estimate of the cost of the construction of the Arcade was £30,000. In reality, though, the final cost was closer to £60,000.

Operation of the Arcade

Irrespective of the Governor’s or anyone else’s wishes, Adelaide Arcade did not solve Adelaide’s economic woes. The proprietors of the Arcade struggled so significantly to find tenants for their new storefronts that they resorted to offering a full year’s lease rent-free. This ploy seems to have worked, as the Arcade has been in consistent occupation since then.

One of the most notorious events in the Arcade’s history occurred shortly after its opening. The Arcade Beadle (a caretaker) Francis Cluney was popular with the storekeepers and shoppers of the Arcade. He was known for his military dress and manner, having fought for the British Empire in the Crimean War. On 21 June 1887, at about 8.15pm, the lights suddenly went out. Upon investigation of the engine room, Cluney’s mangled body was found stuck in the machinery. Contemporary news reports were very graphic in their descriptions of the event, and this tragedy has stuck in the public consciousness.

Over the decades, Adelaide Arcade slowly lost prominence as the pre-eminent shopping centre of Adelaide. It nevertheless continued regular operations until 1935, when significant renovations were undertaken after a transfer of ownership of the complex. The new owners, Alfred Netter and Alexander Solomon, sought to boost sales through a modern overhaul of the building. Grand plans were made for aquariums, milk bars and ‘penny in the slot machines’, though in practice the main change was a remodelling of storefronts, an upgrade to the lighting, and the installation of telephone boxes. This visual overhaul was apparently very successful, and the somewhat flagging fortune of Adelaide Arcade was revitalised.

There was another, more fundamental, overhaul to the stores in 1968. An interior walkway was added on the second floor, and the number of shops was thereby doubled from 50 to 100. The interior staircases were removed from each store, and the former workshops were remade into separate shops themselves. In 1970, the original marble tiles had become worn down and were replaced.

In 1976, Adelaide Arcade enjoyed the boon of the creation of Rundle Mall, outside the Rundle Mall end of the Arcade a fountain was installed and during the launch celebrations was filled with champagne, enjoyed by Premier Don Dunstan. In 1980, however, tragedy struck. A fire caught hold in Gay’s Arcade and subsequently spread to the main section of Adelaide Arcade. Gay’s Arcade was completely gutted, and Adelaide Arcade suffered over $2 million in damage. Nobody was injured in the blaze, though in the course of evacuating a pet store ‘[a] detective was bitten by a reluctant parrot and a police sergeant was kicked by a kangaroo in the operation. These were the only injuries reported in the blaze’. The entire arcade was closed for trading for a week. Shortly after this unfortunate event, the heritage of Adelaide Arcade was safeguarded through its inscription on the Register of the National Estate.

Apart from its shops, the building often known to the public through its association with the paranormal. It is claimed to be Adelaide’s most haunted building, with up to five resident ghosts, and ghost tours are a popular way to explore its history. The most famous supposed spirit is that of Beadle Cluney, no doubt due to the tragic and grisly manner of his death. The other popular haunting figures are Sydney Kennedy Byron and his mother Bridget. In 1902 Sydney died at age 3 while sleeping in his home, one of the Arcade stores, most likely of gas inhalation. Bridget claimed that he must have turned on the gas himself, but she was accused of murder. After a sensational trial in which it was determined that it could not be known who turned on the gas, she was allowed to go free. Nevertheless, she ended her own life later that year after enduring months of vilification by the Adelaide public. Both Sydney and Bridget are popular with psychics and mediums who visit the Arcade. Regardless of these grisly associations, Adelaide Arcade remains a popular shopping destination as Adelaide’s only remaining 19th century shopping arcade. 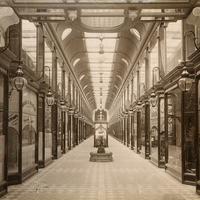 Image courtesy of the State Library of South Australia, SLSA B 2903, Public Domain. 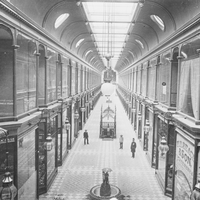 Image courtesy of the State Library of South Australia, SLSA B 7496, Public Domain. 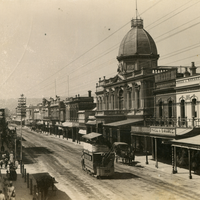 Image courtesy of the State Library of South Australia, SLSA B 2898, Public Domain.

Image courtesy of the State Library of South Australia, SLSA B 479, Public Domain. 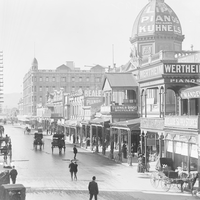 Image courtesy of the State Library of South Australia, SLSA B 8492, Public Domain. 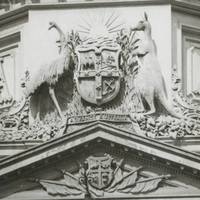 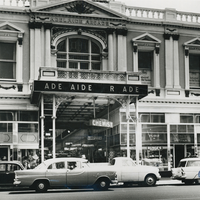 Hi Patricia,
I'm afraid that's one I don't know. It might be possible to find the business in one of the directories held by the State Library of South Australia with a little more digging - https://guides.slsa.sa.gov.au/c.php?g=410329&p=2794474

During the 60s near shop 9 there was a ladies clothing shop with a stairway to a machinist room upstairs, can you tell me the name the business that was there.