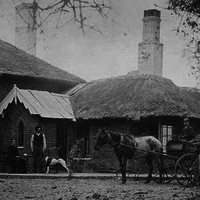 William Henry Gray was born in London in 1808 and received his education through a scholarship to a local charity school.  He grew up during the Napoleonic wars and later recalled seeing the entrance of the Duke of Wellington into London after the battle of Waterloo in 1815.  During his early life he worked as a tanner in London, and in 1830 met some young men, including Robert Thomas, future editor of the South Australian Register, who sparked his interest in emigrating to take up new opportunities in the colonies.  In 1834, Gray bought a large allotment when land in the new colony of South Australia was put up for sale in London. However, because of British governmental delays he changed his mind and decided to sail to America.  He tried unsuccessfully several times to get his money back, but eventually the matter was settled and in late 1836 Gray, his sister, and two servants sailed for South Australia on the John Renwick.  They arrived in February 1837, just weeks after the proclamation of the colony.

From arrival, early life in the colony was very hard.  In his eighties, Mr Gray gave a gripping account of this difficult time, writing that ‘when our goods were landed [at Holdfast Bay] we had to carry everything to the place now known as Adelaide.  I carried my kitchen range on my back the whole distance, and we camped on the hill near where Hindley Street is now’. All potable water had to be carried from the River Torrens.  Gray helped Colonel Light to burn the kangaroo grass which was growing from where Rundle Street now is to where the Kent Town Brewery is.  Gray’s land holdings in the new colony included a property at the Torrens reed beds (roughly where Fulham is now), and several plots in the new settlement of Adelaide.  He built with his own hands two rush-roofed cottages on North Terrace, thought to be the first in the colony.  At this time provisions were very scarce and there were no vegetables to be had.  Early each morning Gray went down to the reed beds to search for thistles.  Then he and his sister boiled and ate them instead of vegetables for breakfast, as flour was very dear and meat almost unobtainable.  However, he said, ‘with all these hardships nobody grumbled - there was less grumbling sixty years ago than there is now’.

After this harsh beginning, Gray rapidly increased his land and grazing holdings, and during the gold rushes of the 1850s also sourced wheat to ship to Victoria.  In the 1860s Gray travelled extensively across Australia, riding to the Northern Territory with John McKinlay’s expedition, and travelling to Perth to examine timber production there.  He briefly owned property at Eucla, on the Great Australian Bight, but this venture failed, and he returned to Adelaide.

William Gray was prominent in the civic life of South Australia, and for twenty years was Chairman of the West Torrens District Council.  He was a Freemason, and, when the colonial Government attempted to take a block of his land near Glenelg for the erection of a fort, he resisted and instead presented the land to the Masonic Order.  According to the Chronicle Gray was considered by some to be eccentric, as he personally supervised the construction of his vault in the West Terrace Cemetery, even living on the same street to oversee its preparation.  Gray died in 1896, and Gray Street, at the western end of North Terrace, is named after him. 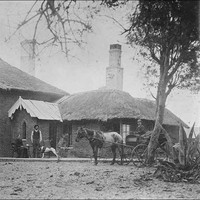 Image courtesy of the State Library of South Australia, SLSA: B7530, Public domain

Hi Leonie and Kathryn,
The references for this article are listed if you click on the sources tab above. The best places to start searching for the sort of information you are after are the State Library of South Australia and State Records: http://www.slsa.sa.gov.au
https://www.archives.sa.gov.au/
Best of luck with your research.

This is just wonderful. I was told by a cousin that our great great grandfather John Matthews and His fathers great great grandfather joseph March came to South Australia in 1848 and 49 and worked for Mr Gray on his farm. He said this was the Reedbeds at Henley Beach. Is there any listings or somewhere that people who worked for Mr Gray is recorded or listed? i would love to know just where in Henley Beach this was as well and what our relatives did. They were agroicultural farmers back in England.