Begins cadetship at the 'Advertiser'

Dumas was a top-ranking scholarship student, and left the University Training College at the age of 15 to join the 'Advertiser'.
1911

After gaining recognition as a sports and parliamentary reporter, Dumas quickly rose through the ranks at the 'Argus' to become the newspaper's Federal political roundsman.
1915

During the second conscription campaign, Dumas was invited to join the staff of Prime Minister WM Hughes. In 1918, he accompanied Hughes to the Imperial Conference in London.
1921

After rejoining the staff of the 'Argus' in 1919, Dumas was appointed the newspaper's youngest ever Chief of Staff two years later.
1924

Dumas worked in London's Fleet Street as editor and manager of the United Cable Service for the Sydney 'Sun' and Melbourne 'Herald'.
1929

Keith Murdoch, while serving as the Managing Director of the Melbourne 'Herald', acquired the 'Advertiser' and invited Dumas to serve as its Managing Editor.
1938 - 1961

Chairman of the Board, Art Gallery of South Australia

Retires from the 'Advertiser'

At the end of a long life Sir Lloyd Dumas described himself as ‘the luckiest man in the world’. He ran Adelaide’s morning newspaper for almost 40 years, was a strong defender of freedom of the press, had the ear of premiers and prime ministers, and was knighted for his service to newspapers and the community. Born on 15th July 1891 at Mount Barker, South Australia, he was the son of Charles Dumas, founding editor of the Mount Barker Courier, and his wife Amelia (née Paltridge). A bright student, he left the Teachers Training College at the age of fifteen to join the Advertiser and in 1911 helped to establish the South Australian branch of the Australian Journalists’ Association.

On 23rd November 1915 he married Daisy Minna Hall and went to Melbourne to join the Argus, rising quickly to become its political roundsman. During the second conscription campaign in 1917 he was invited to join the staff of the Prime Minister, W.M. Hughes, whom he accompanied to the Imperial Conference in London the following year. He rejoined the Argus in 1919 and at the age of 30 was made chief-of-staff. Three years later he was appointed editor of the Melbourne Sun News-Pictorial and in 1927-29 managed the Australian Newspapers Cable Service in London.

In 1929 Keith Murdoch, then managing director of the Melbourne Herald, acquired the Advertiser and invited Dumas to be its managing editor. Dumas accepted, determined to run a newspaper which supported sound government and served the community. He supported Lionel Hill’s Labor government and continued to back Hill and his supporters after their expulsion from the Australian Labor Party in 1931. The Hill minority Labor government survived, with Dumas justifying his support by the need to rescue South Australia from economic depression.

In 1938 Thomas Playford became premier of South Australia as leader of the Liberal and Country League government. Dumas believed that if Playford could industrialize the state the whole community would prosper and the population increase, with beneficial consequences for the circulation of his paper. Hence the Advertiser vigorously supported policies aimed at meeting the needs of business and industry, and continually praised Playford’s initiatives. The Labor Opposition nicknamed the paper ‘the L.C.L. House Journal’. Dumas also upheld the traditional structures of the day --- the government, the law, the churches, the family and the Returned Services League. He saw the home as the proper place for women, who were also encouraged to give voluntary service for good causes. As a result the Advertiser had, in the words of jurist Dr. John Bray, ‘the aura of the nineteenth century provincial organ, the note of ponderous respectability, but also of ponderous responsibility’.

Dumas became managing director of the Advertiser in 1938 and continued in that role until 1961. He was chairman of Advertiser Newspapers Limited from 1942 to 1967. His years at the Advertiser saw the advent of commercial radio and television. The company established radio 5AD in 1929 and the television station ADS-7 in 1959. Its small job-printing office grew to be Griffin Press, one of Australia’s largest printing houses.

Dumas was knighted in 1946. He played a crucial role in establishing the first Adelaide Festival of Arts in 1960. He was the first president of the Australian Newspapers Council on its formation in 1948, chairman of Australian Associated Press (1949-51), chairman of directors of Reuters Newsagency, London (1950-53), and chairman of the board of the Art Gallery of South Australia (1955-63). 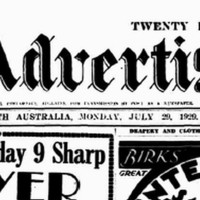 Whitelock, D., Festival! The story of the Adelaide Festival of Arts (Adelaide: Whitelock, 1980).