George Strickland Kingston was born in Bandon, Cork, Ireland, in August 1807, the son of timber merchant and landowner George Kingston and his wife Hester (née Holland). His future in his native land was curtailed by economic depression and in the 1820s he worked in England gathering experience in civil engineering. He returned briefly to Ireland to marry Henrietta (Harriet) Ann Stuart McDonough on 5th November 1829 and then spent two years in Birmingham working for water engineers before he committed himself to the South Australian Colonization scheme. He worked as an unpaid assistant from 1834, hoping to secure a position from the Commissioners. Without influence or contacts, his position was tenuous during the parliamentary delays in establishing the new private enterprise colony, but eventually he was offered the post of Deputy Surveyor-General under Colonel William Light. He sailed on the Cygnet in 1836.

Although Kingston had no experience as a surveyor, he initially formed a good partnership with Light and was the first man to explore the inland plain where Adelaide was eventually sited. It was he who, with John Morphett and Lieutenant William Field, discovered the River Torrens. When Light returned from Port Lincoln in December 1836, Kingston recommended the new site and supported his superior against the opposition of Governor Hindmarsh, who wanted the capital to be closer to its port. An acrimonious dispute erupted and it was Kingston who returned to London with the report that resulted in Hindmarsh’s recall. At the same time, the Colonization Commissioners wanted Light to hasten the survey and authorised Kingston to supplant him if he was unwilling to expedite matters. Light resigned and Kingston, despite his lack of surveying experience, took over the task, until he too was replaced. Recent analysis suggests that it was Kingston who was the principal designer of the Adelaide town plan, although the acclaim has gone to Colonel Light.

Under the new Governor, George Gawler, Kingston became Civil Engineer and Inspector of Public Works and began work on Government House, the Adelaide Gaol and a customs house at Glenelg. Government employment stopped with the collapse of the South Australian economy in the early 1840s and Kingston barely survived on the few private commissions he received as a self-taught architect. Surviving examples of his work include Ayers House, the original section of Adelaide Gaol and ‘Cummins’, the home he built for John Morphett. He also designed his family’s seaside home at Brighton, now known as Kingston House, and the first monument to Colonel Light in Light Square.

Fortune smiled again when he became a shareholder in the ‘Monster Mine’ at Burra, which made him a wealthy man. He eventually became a long-time director of the company and went on to represent the Burra district in the Legislative Council in 1851. His strong democratic leaning led him to fight for a broad franchise for the Lower House and he won a seat in the new House of Assembly in 1857, becoming its first Speaker. Described as an irascible Irishman, he garnered enemies by his persistent opposition to State aid for religion.

His first wife died in 1839 and on 10th April 1841 he married Ludovina Cameron, by whom he had six children, including Charles Cameron Kingston. Ludovina died in 1851 and Kingston married Emma Lipson on 4th December 1856. He became an establishment figure in Adelaide, walking the streets of the city with a silver-topped cane. He received a knighthood in 1870 and held his position as Speaker of the House of Assembly until his death on 26th November 1880 on a voyage to India for his health. He was buried at sea. Image courtesy of the State Library of South Australia, SLSA: B 350, Public Domain 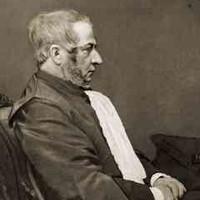 Image courtesy of the State Library of South Australia, SLSA: B 2403, Public Domain

Participant:
The opening of Parliament 1857