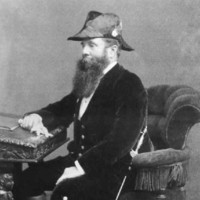 In partnership with Edward Logue at the Old Kent Brewery

Mayor of Kensington and Norwood

Transferred his business to the Kent Town Brewery

Held the Southern Districts seat on the Legislative Council

Edwin Thomas Smith was born in Walsall, Staffordshire, England, on 6th April 1830, the son of leather merchant Edwin Smith and his wife Louisa (née Mason). Young Edwin was expected to succeed his ironmonger-uncle but followed his gold-mad schoolfellows to the colonies, buoyed up by a shipload of his uncle’s stock and credit. He sailed for Melbourne in 1853 on the California but, putting in to Adelaide on the way, decided to stay. On 25th June 1857 he married Florence Stock. His connections launched him, his amiable personality made him friends and his Staffordshire ironware store prospered. In 1860 he exchanged importing for brewing, entering into partnership with Edward Logue at the Old Kent Brewery. Logue’s sudden death two years later left Smith the sole proprietor of a business about to boom.

Trading on his reputation as a genial brewer, he was Mayor of Kensington and Norwood five times between 1867 and 1873. He was certainly a dynamo in the district, though apt to take the credit due to others for the rapid development of the municipality’s roads, services and new town hall. His first wife died in 1862 and on 11th November 1869 he married Elizabeth Spicer. Extending his regional sphere of influence, from 1871 to 1893 he sat in the House of Assembly as the member for East Torrens but his business always came first. Overseas trips in the 1870s were primarily to acquire brewing equipment and information on the latest techniques, but investigating urban reform and representing South Australia at international exhibitions were happy side-issues, turned as much to his own benefit as that of the colony. Backed by shrewd investors, he transferred his business to the Kent Town Brewery, built at a cost of £17,000 and opened to great fanfare in 1875.

Smith was the patron or an office-holder of almost every society and club for ‘manly sports’. He was a crack rifle shot and held positions in the Hunt Club and the Jockey Club, despite being so short that he could not sit a horse. Charities, hospitals and cultural institutions all benefited from his generosity and he sat on the boards of numerous companies, public societies and commercial groups. He became Adelaide’s favourite millionaire.

In 1878 he consolidated his assets to purchase ‘The Acacias’ at Marryatville, and major extensions and redecoration as well as dramatic landscaping were carried out through the 1880s. Meanwhile, Smith served five terms as Mayor of Adelaide, in 1879-81 and 1886-87, and drove the same rapid spate of city development that he had pushed in Kensington and Norwood. The squares were enclosed with iron railings, the parklands were planted with trees, the River Torrens was dammed to create a lake and the Rotunda Lawn (now Elder Park) was formed. Smith was also Executive Chairman of the Adelaide Jubilee International Exhibition (1887-88), which he and his brewery investors backed financially in the face of government reluctance. He entertained lavishly at the Town Hall and ‘The Acacias’, adding a banqueting room at the former and a ballroom at the latter in vain attempts to entertain the royal princes who came for the Exhibition. Smith was appointed K.C.M.G. in 1888 for his Exhibition and municipal services.

This honour signalled the commencement of his thirty-year reign as ‘the Grand Old Man of Adelaide’. He merged his business with the West End Brewery and floated the S.A. Brewing Company, serving as its Chairman until his death. After a world tour in the early 1890s, he returned to South Australia and entered the Legislative Council, holding the Southern Districts seat from 1894 to 1902. Philanthropy and public service filled his later years. In 1894 he gave the city of Adelaide its statue of Queen Victoria and in his will left legacies to almost forty institutions and charities. 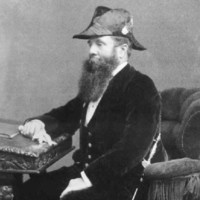 Image courtesy of the State Library of South Australia, SLSA: B 7702, Public Domain 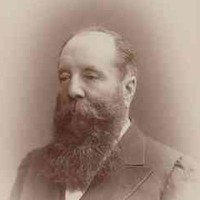 Image courtesy of the State Library of South Australia, SLSA: B 11293, Public Domain 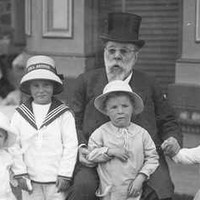 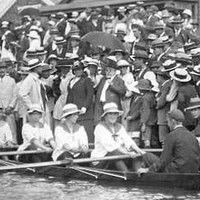 Crowds watching rowers on the River Torrens, Adelaide. Sir ET Smith stands in the centre under an umbrella, c.1918