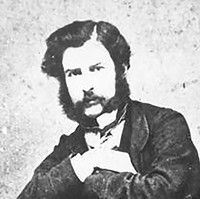 Samuel Thomas Gill was born on 21st May 1818 at Perriton, Somerset, England, the son of Reverend Samuel Gill and his wife Winifred. In about 1833 he completed his formal education and began his art training, also taking up a position with a Plymouth carver and gilder of frames. In December 1839 the family arrived in Adelaide on the Caroline and in March the following year Gill announced in the South Australian Register that he had opened rooms in Gawler Place and was available for commissions.

For twelve years Gill produced lively images of life in early Adelaide and nearby rural areas. In 1844 he made watercolours of the departure of Captain Charles Sturt on his journey to inland Australia. The best-known of these, Sturt’s overland expedition leaving Adelaide, 10th August 1844, shows the boat Sturt took to use on the inland sea that he expected to find. The following year Gill produced a large group of water-colours of Adelaide, Port Adelaide, rural views and mining scenes, mostly as a commission. After this success he accompanied John Ainsworth Horrocks’s 1846 North-West Expedition as its recording artist. Although the venture met with tragedy when Horrocks died after being accidentally shot, the series of works Gill produced from this expedition are among the most important in the state’s art.

In 1847 the first exhibition of work by South Australian colonial artists was held and Gill showed sixty-two paintings and drawings; in the second in 1848, he exhibited ten. The following year Gill began producing lithographs and made a number of topical images including a series of drawings of prominent citizens entitled Heads of the People. In his Adelaide and South Australian scenes he proved himself to be adept at handling a wide range of subjects, including street scenes, houses, rural settings, landscapes, portraiture and even caricature. In early 1852 Gill left for the Victorian goldfields, having created a vast body of work recording the growth of South Australia during its exciting early years.

While he spent a relatively short time at the diggings, Gill’s lively views led to the appellation (on the headstone erected well after his death) of ‘The Artist of the Goldfields’. One of the largest bodies of works he made is his series of forty-eight lithographs entitled Victoria Gold Diggings and Diggers As They Are. In 1853, in Melbourne, Gill exhibited watercolours of the goldfields as well as South Australian scenes and later the same year he began another lithographic series Views in and around Melbourne. In 1856 Samuel Thomas Gill left for Sydney where he made another series, Scenery in and around Sydney, as well as several watercolours of notable Sydney landmarks. He returned to Melbourne in 1864 and lived there for the rest of his life. His Australian Sketchbook became available during the 1860s and his many watercolour views of Melbourne are reminiscent of his crowded Adelaide scenes. In later years, struggling with alcoholism, he frequently repeated earlier subjects. These later works are distinguished by a coarser handling of watercolour and lack the lively freshness of his early works.

S.T. Gill collapsed and died on the steps of the Bourke Street Post Office, Melbourne, on 27th October 1880. He was buried in a common grave in Melbourne General Cemetery but in 1913 his remains were reinterred in a private grave and a headstone was provided by the Royal Historical Society of Victoria. The Art Gallery of South Australia holds a vast collection of his work. 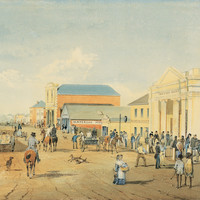 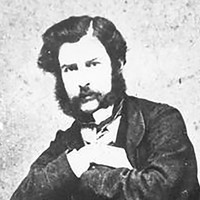