While attending St. Andrew's Presbyterian Church, Dawson was noted for his strong bass voice. At the age of seventeen, he began to attend singing lessons with C.J. Stevens, often in the company of Harry Vande Sluys (the future vaudeville star Roy Rene).
1902

Departs for the United Kingdom to study music

With his parents' blessing, Dawson travelled to London to study music with the eminent baritone Charles Santley.
1902 - 1903

Tours and performs throughout England

Dawson gave meritorious performances at the Crystal Palace and Queen's Hall, and toured with concert and opera singer Madame Emma Albani in the west of England.
1904

Dawson performed a recording test for the Edison Bell Phonograph Company, and subsequently learned the technique for singing into an acoustic recording horn. His recording career spanned 50 years, from the earliest wax recording cylinders to long-playing discs and tapes. Today, his songs can be heard on CD and other digital media.
1905

During World War I, Dawson joined the Australian Imperial Force, but did not serve overseas.
1918 - 1939

At the conclusion of the First World War, Dawson returned to England and became a wandering troubaor. During this time, he recorded music ranging from classics to Australian bush ballads. He performed in opera, oratorio, lieder and musical comedy, but is perhaps best remembered for his ballads. It was during this period that he became the first singer to record 'Waltzing Matilda'.
1930 - 1931

Upon his return to Australia, Dawson took up residence in Sydney, and entertained troops in Australia and New Zealand during World War II.
1951

Following a recorded recital in Adelaide, Dawson's doctors advised him to stop singing.
1960

Dawson's final recorded performances (for the ABC) occurred in Adelaide.
1961

Peter Smith Dawson said of himself, ‘I am a man of the soil, I come from the people and what gift I am fortunate enough to possess I want to give back to the people.’ He was born in Adelaide on 31st January 1882, the son of ironworker and plumber Thomas Dawson and his wife Alison (née Miller). He spent his youth in St. Peters, though he later insisted it was East Adelaide, St. Peters being ‘a name given to it by snobs’. Educated at East Adelaide Primary School and Pulteney Street Grammar School, he then worked for his father who wanted Peter to learn the business from the beginning. When he joined St. Andrew’s Presbyterian Church, his strong bass voice was noticed, and at 17, in order to attend singing lessons from C.J. Stevens, he rode to them bareback on a large white horse with a younger pupil, Harry Vande Sluys, who became the vaudeville and radio star Roy Rene (‘Mo’). Dawson was such a competent metal-worker that his father was reluctant to encourage a singing career.

In 1902, however, having sung in concerts with the Adelaide Grand Orchestra and having won the bass solo section of the South Street Competitions in Ballarat, Victoria, Dawson left, with his parents’ blessing, for London to study with the eminent baritone Charles Santley. He gave meritorious performances at the Crystal Palace and Queen’s Hall promenade concerts and during 1903 toured with concert and opera singer Madame Albani in the west of England. He married the promising young soprano Annie Mortimer Noble (stage name Annette George) on 20th May 1905 and they made international concert tours together for twenty years before a car accident ended her career.

In 1904 Dawson did a test for the Edison Bell Phonograph Company. He was taught the technique of singing into an acoustic recording horn and cut a number of two-minute cylinders. Soon afterwards he made recordings for the Gramophone & Typewriter Company, which later became His Master’s Voice. His recording career of 50 years extended from his first known recording on Edison cylinders to the long-playing disc and tapes for the A.B.C. in 1958. His songs can now be heard on CD.

During World War I Dawson was in Australia, enlisting in 1918 in the Australian Imperial Force but not serving overseas. After the war he returned to England and became a wandering troubador, recording everything from classics to Australian bush ballads. With his rollicking style and youthful exuberance, he was England’s favourite baritone. Although he performed in opera, oratorio, lieder and musical comedy, he is best remembered for his ballads, which included ‘The Floral Dance’, ‘Roses of Picardy’ and ‘The Road to Mandalay’. He was the first singer to record ‘Waltzing Matilda’.

Dawson said that his recordings were ‘the dominating success of his career’. His total sales exceeded 13 million, covering 3,500 titles. They were halcyon but exhausting days, as wax masters wore out after thirty transcriptions and had to be re-recorded, in one take, over and over again. Dawson used many pseudonyms, depending on the types of songs he was singing and composing. In 1930-31 he topped the bill at the London Palladium.

In 1939-47 he lived in Sydney, entertaining the troops in Australia and New Zealand during World War II. In 1951 he published his autobiography, Fifty Years of Song. His wife died in 1953 and the following year, on 29th April, Dawson married her sister, Constance Bedford Noble in Sydney. After a recorded recital in Adelaide in 1956, doctors advised him to stop singing.

Peter Dawson died in Sydney on 27th September 1961 and was buried at Rookwood Cemetery. A friendly, handsome, well-built man, he retained his boyishness all his life and, although he loved the limelight, remained unspoilt by fame. 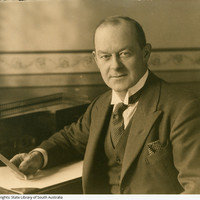 Image courtesy of the State Library of South Australia, SLSA: B 6018, public domain. Peter Dawson, c. 1933. This autographed picture was signed by Dawson on 20 May 1933 while he was in Brisbane
Courtesy of/Photographer:Harrods Ltd