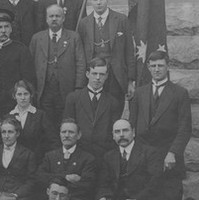 Norman Barnett Tindale was born in Perth, Western Australia, on 12th October 1900, the son of Salvation Army accountant James Hepburn Tindale and his missionary wife Mary Jane (née Barnett). In 1907 his parents’ work took them to Tokyo, Japan, and the family lived there for eight years. As well as learning Japanese, German and French, Tindale developed a keen interest in natural history. Returning to Adelaide, he was appointed Entomologist’s Assistant at the South Australian Museum in 1919. A few months later he lost the sight of one eye in an acetylene gas explosion while assisting his father with ‘limelight’ photographic work, but the accident dulled none of his enthusiasm for science. His boyhood passion for entomology gave way to anthropology during a field trip to Groote Eylandt in the Gulf of Carpentaria in 1921-22. On 27th December 1924 he married Dorothy May Gibson and they had two children.

He studied natural science at the University of Adelaide and participated in annual expeditions of the Board for Anthropological Research to central Australia from 1928 until 1937. Tindale documented Aboriginal society within its environmental context, recording material culture and techniques under threat of transformation through European contact. His scientific training enabled him to undertake the first systematic archaeological excavation in Australia at Devon Downs on the River Murray in 1929. He used the data to formulate the first cultural chronology of Aboriginal prehistory.

By the late 1930s Tindale had worked with senior indigenous men and women from all major cultural and ecological zones of Aboriginal Australia. He produced the first comprehensive regional survey of Australian tribes in 1940, later refined in 1974. His resulting map, depicting the country’s division into 250 Aboriginal tribal territories, played a decisive role in overturning the concept of terra nullius.

Tindale published more than 170 scientific papers, reflecting a range of research interests spanning geology, entomology, material culture, archaeology and social anthropology. Officially retiring from the South Australian Museum in 1965, he continued his research, making his home in California, United States, and, after the death of his first wife, marrying Muriel Nevin on 1st August 1970. He received honorary doctorates from the University of Colorado (1967) and the Australian National University (1980). He returned to Australia periodically for further research trips, making close observations in all the fields that interested him, from archaeology and anthropology to the study of butterflies and moths. He became a world authority on the Hepialid moth.

Meticulous record-keeping was a hallmark of Tindale’s scientific career. He maintained indexed journals of his working life and ensured that the South Australian Museum’s collections were precisely documented, greatly increasing their research value. He personally collected and documented more than 3,000 artefacts and many natural history specimens. He also made some of Australia’s earliest and finest ethnographic films and made unique recordings of Aboriginal songs. He was the first Australian anthropologist to realize the potential for collecting Aboriginal drawings on paper as a means of documenting traditions and relationships to land.

A little known aspect of Tindale’s life was his period of service during the Second World War. As one of a handful of Westerners who could speak Japanese at the outbreak of the war, Tindale enlisted in the Australian and then the American intelligence services. Promoted to wing commander by the Pentagon, he played a crucial role in the Pacific War by breaking Japanese codes and identifying the origins of parts from crashed Japanese aircraft.

Norman Tindale died in Palo Alto, California, on 19th November 1993 and was cremated. He was awarded the A.O. posthumously in the Australia Day honours, 1994. 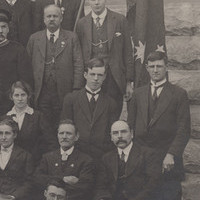 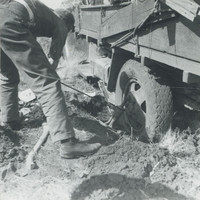 Norman Tindale attempts to dig out the wheel of a bogged down transport vehicle en route to the Warburton Ranges, 1935
Courtesy of/Photographer:Charles Pearcy Mountford

It is great to learn about my great grandfathers life

It is amazing to learn about my great grandfathers life.

Glad the article was of interest Raife. He certainly led an amazing life.

Smith, M.A., ‘The opening chapters of the romance of excavation in Australia: Reflections on Norman Tindale’s archaeology’, Historical Records of Australian Science 13, 2000.