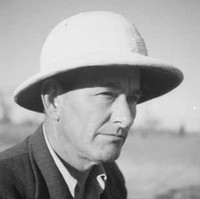 Charles Mountford was born on 8th May 1890 at Hallett, South Australia, the son of farmer Charles Mountford and his wife Arabella (née Windsor). Educated at Hallett, Georgetown and Moonta, he began working for his father at the age of ten. After the family moved to Adelaide, Mountford found work as a horse-tram conductor and began correspondence courses in mechanics and engineeering at the South Australian School of Mines and Industries. Appointed as an electrical mechanic with the Municipal Tramways Trust, he moved to the Postmaster-General’s Department in 1913. On 18th March 1914 he married Florence Purnell at Thebarton and they had two children.

In 1920 Mountford was promoted to the Darwin Post Office as mechanic-in-charge. Contact with Aboriginal people sparked his interest in their ceremonies and tribal lore. Returning to Adelaide, he experienced personal tragedy with the death of his wife in 1925. He consoled himself by making tracings of Aboriginal rock carvings near his parents’ farm at Peterborough, furthering this interest by joining the newly-formed Anthropological Society of South Australia in 1926 and surveying more rock engravings. On 28th October 1933 he married Bessie Ilma Johnstone.

In 1935 Mountford was appointed secretary of a board of enquiry investigating charges of ill-treatment of Aborigines at Hermannsburg and Ayers Rock. Later that year he was invited to join an expedition to the Warburton Range, Western Australia, as photographer and art recorder. He returned with over 400 crayon drawings depicting mythological sites, and many fine photographs. His reputation as a pictorial ethnographer grew with expeditions to the Granites in the Northern Territory and Nepabunna Mission in the Flinders Ranges. He revisited Nepabunna several times, gathering an unmatched documentary record of the Adnyamathanha people.

During 1940 Mountford took extended leave from the P.M.G., which enabled him to undertake a four-month expedition among the Pitjantjatjara people. The result was the first detailed survey of the art and mythology of Ayers Rock and the Olgas. Mountford’s exhibitions of photographs, his book and prize-winning film of the expedition, Brown Men and Red Sand, became springboards for his career. During an expedition to the MacDonnell Ranges in 1942 he made another influential film, Namatjira the Painter, which accompanied his book on the artist.

Mountford’s skilled presentations led to his engagement as a lecturer by the Commonwealth Department of Information and his resulting tours of the United States in 1945 and 1946 brought Aboriginal art to a large international audience for the first time. He subsequently led the National Geographic Society’s 1948 anthropological and scientific expedition to Arnhem Land, publishing a detailed account of the region’s art and producing three more films. Another National Geographic Society expedition to Melville Island followed in 1954. The resulting collections of bark paintings were distributed to national institutions, greatly influencing the appreciation of Aboriginal art.

On his retirement from the Commonwealth Public Service in 1955, Mountford was appointed O.B.E. He and the artist Ainslie Roberts became widely known for their joint publications, The Dreamtime, The Dawn of Time and The First Sunrise, dealing with Aboriginal mythology, but Mountford concentrated his efforts upon an illustrated analysis of Central Australian Aboriginal art and mythology. He completed the 600-page Nomads of the Australian Desert at the age of 86.

Charles Mountford died on 16th December 1976 and was cremated. He had lived long enough, however, to see his manuscripts and his 13,000 photographs catalogued and established as a research collection in the State Library of South Australia. 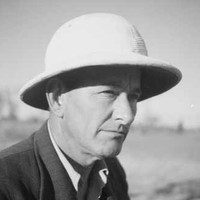 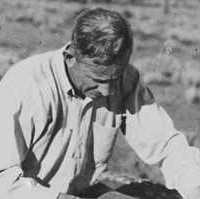