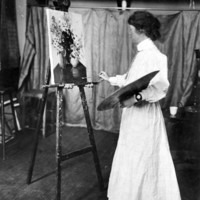 Margaret Rose Preston was born on 29th April 1875 at Port Adelaide, South Australia, the daughter of marine engineer David McPherson and his wife Prudence (née Lyle). In 1885 she moved to Sydney with her family, later studying painting there with William Lister Lister. In the 1890s she studied at the National Gallery’s school of painting in Melbourne under Bernard Hall before coming to Adelaide to study with H.P. Gill at the School of Design, Painting and Technical Arts. It was during the 1890s in Adelaide that she first exhibited professionally as an artist, showing paintings at the South Australian Society of Arts. From 1899 to 1904 and again from 1907 to 1912 Preston taught in Adelaide. Her concentration on tonalism in her early work influenced the art of her students, the most notable of whom were Bessie Davidson, Stella Bowen, May Grigg and Gladys Reynell. Her still-life The tea urn (c. 1909) is typical of this style of painting.

Preston travelled extensively in 1904-1907 and in 1912-1919. On her first trip she journeyed with Bessie Davidson, exhibiting with her in Adelaide on their return. On her second trip, in the company of Gladys Reynell, she spent over a year in France, studied pottery in London and then taught rehabilitating soldiers. In 1912-13 she was adviser (with Will Ashton) to the Art Gallery of South Australia on purchases of art-works. On 31st December 1919 she married William Preston, thereafter exhibiting as Margaret Preston (rather than as either Rose or Margaret McPherson). After their marriage the couple lived in Sydney and, from 1932 to 1939, in Berowra.

Margaret Preston was highly influential both as a painter and as a printmaker. After 1910 she moved away from her initial tonalism and by the 1920s was exploring decorative elements and vivid colour. Her paintings took on vigorous, overall patterning, as can be seen in White and red hibiscus (1925). Also able to use remarkable restraint in colour and composition, she produced highly stylized paintings, Implement Blue (1927) being the best known example.

Pronounced by Sydney Ure Smith in 1927 as ‘a natural enemy of the dull’, Preston also vigorously advocated the use of Aboriginal design in all forms of visual art and crafts in order to achieve a national Australian style. Her paintings and her hand-coloured woodcuts frequently included native flora and fauna as subjects. Her assertive form of modernism, in which she reduced compositions to their decorative elements, was widely accepted during the 1920s and ’30s and she was the first Australian modernist to achieve a significant reputation.

She wrote frequently for such publications as Art in Australia and was included in Australian exhibitions shown overseas, such as the Australian Art Exhibition in London in 1923. In the exhibition ‘Art of Australia: 1788 to 1941’, shown in Canada and the United States in 1941, she was represented by three works, including the 1941 painting Aboriginal landscape. In 1942 her work was shown in ‘William Dobell and Margaret Preston’ at the Art Gallery of New South Wales. She exhibited regularly throughout Australia and her last solo exhibition was in Sydney in 1953. She continued to produce work during the 1950s, in particular, colour stencils of Aboriginal subjects in a range of ochre colours combined with dramatic areas of black.

Margaret Preston died in Mosman, New South Wales, on 28th May 1963 and was cremated. The first Australian art museum to acquire Margaret Preston’s work was the Art Gallery of South Australia in 1907. She is represented in the National Gallery of Australia, Canberra, and all state art galleries, as well as in private and university collections throughout the country. 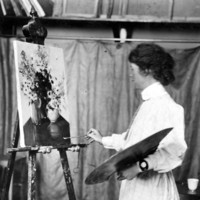 North, I., H. McQueen and I. Seivl, The art of Margaret Preston (Adelaide: Art Gallery Board of South Australia, 1980).