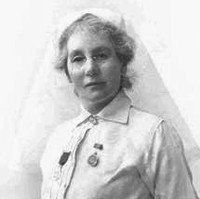 Margaret Graham, a nurse at the Adelaide Hospital, gained notoriety in 1895 when she supported a group of senior nurses who had appealed against a nursing appointment. Her defiance of the hospital authorities contributed to a protracted dispute involving members of the board of management, the medical and nursing staff and the government. When Graham later became Matron, her relationship with the board remained cool but, despite the famous ‘Hospital Row’, she was able to make important contributions to nursing in South Australia.

She was born at Carlisle, England, on 15th February 1860, the daughter of house-painter John Graham and his wife Margaret (née Farrer). In 1891 she was appointed as a probationer nurse at the Adelaide Hospital, the first evidence of her presence in South Australia. She completed her training in 1894 and during that year she signed the petition circulating throughout South Australia urging Parliament to grant women the right to vote.

She remained on the hospital staff waiting for appointment as a charge nurse. At the end of 1894 her support for the senior charge nurses led to conflict. The board of management had pressured the nurses to withdraw their objections to the appointment of a new night superintendent who happened to be the sister of the Chief Secretary. Graham refused to retract, on the grounds of injustice and nepotism, and actively supported a colleague, Louise Hawkins, who asked the government to conduct an inquiry. When the board learnt of this action it dismissed both nurses, and Graham then spent many months seeking private employment.

A Royal Commission was held, in which Graham criticized the initial appointment as ‘a glaring piece of favouritism’, described her own dismissal as ‘tomfoolery’ and attacked the Premier, C.C. Kingston, for his ‘mealy-mouthed utterances’. When the board’s term of office expired early in 1896, the government reinstated Graham as a charge nurse before appointing a new board. Towards the end of 1897 the position of Matron at the Adelaide Hospital became vacant for the fourth time in six years and Graham was the only applicant. Her appointment began on 1st January 1898 and lasted for 22 years.

The board continued to mistrust her but she provided leadership for a loyal nursing staff. During her matronship almost 500 nurses came under her care and in 1900 she initiated the formation of the South Australian branch of the British Nurses’ Association. Nurses at the Adelaide Hospital supported it strongly, as did a number of doctors. The branch closed in the 1960s but has left a legacy in the form of the Nurses’ Memorial Foundation which continues to support nursing causes.

When the Army Nursing Reserve was established in South Australia in 1904, Graham was an active member and in December 1914 she was one of the first South Australian nurses to leave for overseas service with the Australian Imperial Force. She served in Egypt, worked on hospital ships evacuating the wounded from Gallipoli, and later served in Britain. In 1916 she was mentioned in dispatches and awarded the Royal Red Cross for her contribution to army nursing. After her return to Adelaide in 1919 she spent six months at a temporary hospital in the Exhibition Building, in charge of nursing the victims of the influenza pandemic. In December 1920 she resigned as Matron of the Adelaide Hospital and retired in February 1921. She returned to live in England where she died on 4th July 1942.

Margaret Graham was held in high regard, particularly at the Adelaide Hospital, for her strong sense of justice, her leadership qualities and her support for the less powerful. Graham Building is now the centre of the hospital’s administrative services, and photographs of Margaret Graham and other memorabilia are displayed in the conference room as a tribute to her pioneering contribution to nursing in South Australia. 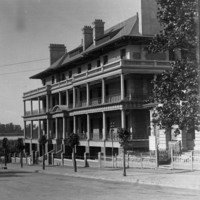 The Adelaide Hospital Nurses’ Building, c. 1920s. Margaret Graham worked in this building between 1898 and 1920 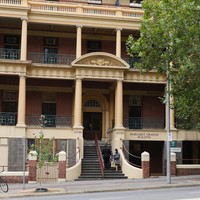 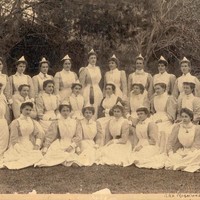