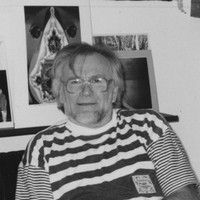 After studying under Olgierd Vetesko in Poland (1940–45) and at the Dusseldorf Kunst Akademie in Germany (1946–49), Kotkowski, known in Australia as Stan or Ostoja, migrated to Melbourne in 1949 and attended the National Gallery School. Moving to South Australia in 1954, he lived and worked at Stirling in the Adelaide Hills from 1955 until his death.

Working in the outback at the Leigh Creek coalfields in 1954–55 inspired his artistic direction, the light and colour making a deep impression: ‘I was struck by the iridescence of the colour ... Not only did the colour seem to be vibrating with intensity but at the same time it gave the impression of being something solid ... The surroundings were drowned in an exciting light that had a life of its own’. (PRG 919/42/16, p1). Capturing this intensity became the focus of his artistic creativity.

At Stanford University, California, on a Churchill Fellowship in 1967, Ostoja came across the newly discovered laser. Back in Adelaide, the Weapons Research Laboratory at Salisbury helped him develop a laser beam whose sweep synchronised with voices and/or electronic music to produce images on a screen. His initial ‘Sound and image’ production at the Adelaide Festival of Arts in 1968 may have been the first time a laser was used in a theatre.

This was the start of his enthusiasm for kinetics and chromasonics. In 1971 at the Australian National University in Canberra he designed a chromasonic tower. With composer Don Banks, Ostoja orchestrated an audio-kinetic production, ‘Synchronos ’71’, the first concert in which the players’ music was instantaneously translated into kinetic visual images, with the musicians ‘playing’ images onto a screen. Ostoja built laser chromasons for exhibition and put on laser kinetic productions at Ballarat in Victoria (1984), for the South Australian Jubilee 150 (1986) and for ‘Synchronos ’91’ (Warsaw, 1991).

Ostoja was an artist of tremendous innovation and talent. He was, at times, criticised for his technological approach to art but as he stated, ‘I am not seeking to smear art with science ... but I am trying to free the imagination from the impediments of means’ (PRG 919/42/16, p15). 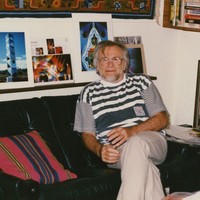 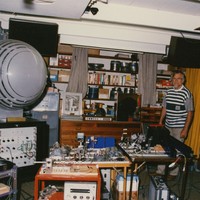