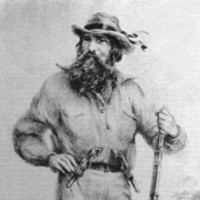 Descended from a family steeped in military service, Stuart was born in Dysart, Fife, Scotland, on 7th September 1815. He was the son of army captain William Stuart and his wife Mary (née McDouall).
1839

Assigned as draughtsman for Captain Charles Sturt's expidition into the interior

Reached the geographical centre of Australia

Successfully crossed the continent from south to north

The John McDouall Stuart Society was founded in his honour

On 26th November 1862 ten exhausted, gaunt and ragged men, on their limping, emaciated horses, arrived at a remote stock run near Mount Margaret, in northern South Australia. With them, in a horse-drawn litter, was the skeletal figure of their leader, stretchered for 1,600 miles, nearly blind, with a crippled right hand and breath which reeked of the corruption of death.

John McDouall Stuart, commander of the South Australian Great Northern Exploring Expedition, had accomplished his life’s ambition on this, his third attempt at the first European crossing of Australia from south to north, passing through the centre. He had dipped his feet and washed his face and hands in the sea, as he had promised Governor MacDonnell. On 25th July 1862 he had triumphantly raised the Union Jack on the northern coast at Chambers Bay, after which the party returned along the same route to a heroes’ reception in Adelaide on 21st January 1863. Sir Roderick Murchison, President of the Royal Geographical Society, London, said, ‘In no time or country has any geographical pioneer more directly advanced the material interests of a colony than Mr. McDouall Stuart has done those of South Australia.’

Descended from a family steeped in military service, Stuart was born in Dysart, Fife, Scotland, on 7th September 1815, in a sixteenth-century home which now houses a museum in his honour. He was the son of army captain William Stuart and his wife Mary (née McDouall). Orphaned in his early teens, he attended the Scottish Naval and Military Academy, Edinburgh, and graduated as a civil engineer. At the age of 23 he embarked on the Indus from Dundee, arriving at Holdfast Bay, South Australia, in January 1839. He entered the Government Survey Department and, despite primitive conditions in survey camps, found that nomadic life in the bush appealed to him. A man of small stature, his life became a constant battle against ill health and poverty. Assigned as draughtsman for the 1844-46 expedition of Captain Charles Sturt into the interior, Stuart gained valuable experience and received his leader’s full approbation. Sturt’s failure to reach the centre of the continent inspired Stuart’s later achievements.

Returning to Adelaide in January 1846, Stuart was incapacitated with scurvy for twelve months and moved to Port Lincoln for health reasons. He surveyed pastoral leases, worked for fellow Scot and shipmate James Sinclair on his properties and tutored the Sinclair children. In 1854 William Finke and the Chambers brothers, James and John, engaged him to survey leases and prospect for minerals in the northern Flinders Ranges. Between May 1858 and January 1860 Stuart led three expeditions into the Lake Eyre region, seeking new grazing lands and minerals for his sponsors.

In contrast to Sturt, Stuart travelled quickly with limited supplies. Horses were his only means of conveyance. On his first attempt to cross the continent, he reached the geographical centre of Australia on 22nd April 1860, accompanied by two companions and twelve horses --- a feat later described as ‘the greatest and pluckiest exploration ever accomplished’. He tried again the following year but it was not until 1862 that he finally made it to the northern shore.

Stuart returned to England in 1864, nearly blind and with a broken constitution. He died on 5th June 1866, a forgotten hero. He was buried at Kensal Green Cemetery, London, with a memorial stone erected by his sister Mary.

As a result of Stuart’s expeditions, the nature of the Red Centre was revealed, South Australia gained control of and settled the Northern Territory, and vast areas of the interior were opened up for European settlement. In 1872 the Adelaide-to-Darwin Overland Telegraph Line was completed along Stuart’s route. His statue stands in Victoria Square, Adelaide, and Central Mount Stuart, the Stuart Highway and Stuart Range are named in his honour. The John McDouall Stuart Society was founded in 1964 by descendants of his companions to perpetuate his name and achievements. 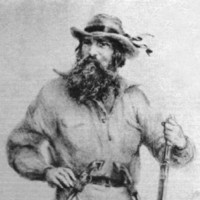 Illustration of John McDouall Stuart leaning on a rifle and armed with two pistols attached to his belt.
Courtesy of/Photographer:Penman & Galbraith, lithographers 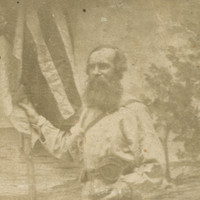 Mudie, I., The heroic journey of John McDouall Stuart (Sydney: Angus and Robertson, 1968).

Associated with:
The Great Stuart Demonstration