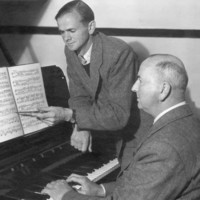 Hooper Brewster Jones was a man who had a passion not only for music but for plain speaking. On one occasion, when he was adjudicating at a South Street Competition in Ballarat, Victoria, one of the other judges did not agree with his verdict on a cornet solo. ‘Could you play the cornet?’ he asked. ‘No,’ Jones replied, ‘but then neither could I lay an egg, but I know when one is rotten.’

Jones was born on 28th June 1887 at Black Rock Plains, South Australia, the son of William Jones and his wife Rebecca (née Williams). His father was the headmaster and sole teacher at the country schools of Armagh and Bute. He was his son’s only music teacher until 1901 when Hooper won a three year scholarship at the Elder Conservatorium of Music in Adelaide. He studied with Byrceson Treharne, won several prizes and had his scholarship extended for a year. In 1902 Quiz’s music critic wrote of the ‘clever playing and gratifying excellence of Master Jones’. Three years later he was described as ‘the most promising student who ever entered the Conservatorium’.

He was nineteen when he won the Elder Scholarship which gave him three years tuition at the Royal College of Music, London, where he studied piano, singing, chamber music and composition. Sir Charles Villiers Stanford taught him composition and one day Jones showed him his own piece, ‘An Indian Serenade’. It was too much for Stanford. The harmonies were outrageously new and the melody broke all the rules. Stanford rushed to the piano, threw his fingers anywhere and asked if ‘that’ was melody. The effect was tonal and quite good --- an accident of course. What was Jones to do? Policy said, ‘Hold your tongue.’ Conscience said, ‘Speak the truth.’ Jones said, ‘That was splendid melody, sir.’ He was expelled from Stanford’s classes.

Jones made numerous appearances in concerts in London and was music master at Harrow Preparatory School and Carlton House Girls’ School, Cambridge, but returned to Adelaide in 1909 to foster music there. On 11th June 1910 he married Gerta Homburg, whom he had met in Germany, where she had studied singing, specializing in German lieder. Jones was never a member of the Elder Conservatorium staff as he felt that this would place too many restrictions on him. He taught piano, singing and composition privately and believed that teaching should be ‘a psychological study of the student’s possibilities’. In July 1915 he conducted his first orchestral concert and later, at his own expense, formed the Brewster Jones Symphony Orchestra at Queen’s Hall. During World War I it was South Australia’s only symphony orchestra and by 1920 it numbered seventy players.

As a pianist and conductor, he introduced contemporary French music to both Adelaide and Melbourne. His symphonic poem ‘Australia Felix’ is an example of professional early twentieth-century programme music. A prolific, original and unacademic composer, his love of the Australian bush and its bird life produced many songs and seventy-three piano pieces. In the Flinders Ranges he noted the songs of the birds while Hans Heysen painted the landscape. Nadia Penalurick, pianist and music critic, enjoyed the piano pieces and often played them and promoted his compositions. He adjudicated at eisteddfods and was the music critic for the Advertiser and later for the News until just before his death. He judged performances against the capabilities of the performers.

By the late 1940s Jones had retired from active musical life. His son Arthur formed a string orchestra in 1947 and in a concert on 8th July 1949 his father was the soloist in the Mozart piano concerto in D minor. Jones gave a fine performance but fifteen minutes later he died of a heart attack. He was buried at Centennial Park Cemetery. Today very little of this handsome, versatile man’s music is heard but several of his grandchildren are well-known musicians. 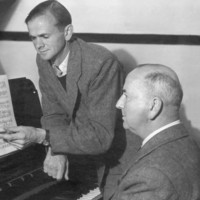