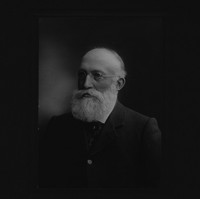 Edward John Woods began his architectural career in London before emigrating to Adelaide in 1860. Woods worked in both private practice and public service as an architect and was well-respected within the profession for his intellect and built works. Among buildings which bear his stamp are the Adelaide Town Hall, General Post Office, Parliament House, St Peter’s Cathedral and many nineteenth century school buildings including school rooms at St Peter’s College and the Teachers Training School at Grote Street, Adelaide.

From London to Adelaide

Edward John Woods was born in London in 1839. He began his architectural career articled to architect Charles J Richardson in London, followed by two years working in the office of Thomas E Knightley. Woods decided to emigrate to South Australia after receiving a letter from Dr William Browne, ‘who painted a rosy picture of the possibilities for architectural talent in a new and progressive country’ (‘Obituary’, 1916, 6).

He arrived in Port Adelaide on the Blackwall in 1860 working for a time on William Browne’s cattle and sheep property near Mt Gambier. He returned to Adelaide to take up his profession of architecture in the employment of local architect Edmund Wright. By 1862 he had entered into partnership with Wright. In 1866 Edward Hamilton also joined the practice as a partner, which was known as Wright, Woods and Hamilton.

On 3 December 1867 Woods married Katharine Gooch, daughter of Charles Gooch, of Adelaide, at St Johns Church.  They would have two sons and three daughters and live at Kent Town. Woods became a prominent Freemason, and for recreation was an enthusiastic rifleman.

The first building Woods worked on in South Australia while employed with Wright was the National Bank Head Office, King William Street, Adelaide. The practice was simultaneously engaged on the Adelaide Town Hall complex and Port Adelaide Town Hall during this period. Wright and Woods prepared drawings for the classically styled Adelaide Town Hall on King William Street as a result of a competition held in 1862. Construction began in 1863 and the Town Hall was inaugurated in June 1866. The classical Adelaide General Post Office was designed and documented by Woods following Wright and Wood’s success in the 1865 competition. However, two other architects, Edward Hamilton and Robert Thomas, influenced the final design. It opened in 1872 with huge celebration, engendering much civic pride.

In 1876 Woods joined the public service as an architect to the Council of Education, simultaneously maintaining his private practice. In this role Woods designed many schools, including those at Mt Gambier, Pt Adelaide and Jamestown. His works of this period also included the Gothic style Training School for Teachers at Grote Street, Adelaide. Woods formed a private partnership with William McMinn around 1877. The Crown & Sceptre Hotel, King William Street, Adelaide (1877) is an example of their work in Italianate style.

Woods was appointed Architect-in-Chief of South Australia in 1878 in which role was unable to practise privately. During this period he designed some buildings at the Parkside Lunatic Asylum at Glenside. Marble Hill, the Governor’s residence in the Adelaide Hills was designed by William McMinn in 1879 and its construction was supervised by Woods in his capacity as Architect-in-Chief. Woods also supervised many civic buildings in Adelaide; these included new Government offices in Victoria Square, and the first wing of the Public Library.

The Classically inspired new Parliament House, located on the prominent corner of North Terrace and King William Street was the result of collaboration between Edmund Wright and Melbourne-based architect Lloyd Tayler in 1873. However construction did not begin until 1883, under the supervision of Architect-in-Chief, Woods, who had redrawn much of the original design. Woods adapted Wright and Tayler's original design including the incorporation of an innovative ventilation system in the Assembly Chamber.  The building not completed until 1939 and without the originally proposed tower and dome.

Edward Woods gained a reputation for his expertise in ventilation. Perhaps he was influenced by his previous employer in Britain, Charles Richardson who was noted for his published work on the subject. Woods lectured on the ‘Ventilation of the Parliament Buildings’ in 1892, when he spoke of his use of double glazing in fixed windows, a dust removal system, and the idea of cooling of air by pushing it over ice during summer.

Woods left government service in 1886 when the position of Architect-in-Chief was abolished and took up private practise again. The small neo-Gothic residence and consulting rooms on North Terrace, Adelaide for Adelaide eye surgeon Dr. Symons was designed by Woods in 1901.

In 1905, aged 66 years, Woods began a partnership with Walter Bagot, who had been a former pupil, with the practice being named Woods & Bagot. During this period the practice was engaged to design St. Joseph’s Convent, Gawler in 1910, St. Patrick’s Church, Grote Street, Adelaide in 1912 and Bagot was made the architect for the University of Adelaide. The architectural partnership of Woods & Bagot lasted until 1913.

Woods was a well-respected member of Adelaide’s architectural fraternity. He was present at the inaugural meeting of the South Australian Institute of Architects in 1886 and was elected its Co-Vice President and Patron. In 1892 Woods was made a Fellow of the Royal Institute of British Architects. In his obituary Edward Woods was described as ‘one of the greatest architects in the Commonwealth’ (‘Obituary’, 1916, 6) while his architectural partner, Walter Bagot recalled Woods as ‘the most intellectual architect of the era’ (Page, Sculptors in Space, 116). Edward Woods died on 5 January 1916, aged 77 following a decline in his health. The practice of Woods Bagot continues today as one of Australia’s largest architectural firms under the names of its two founding partners. 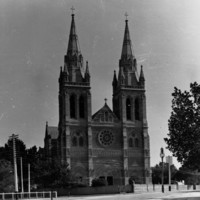 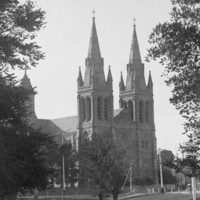 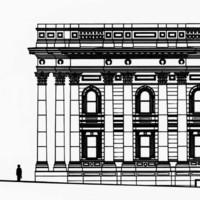 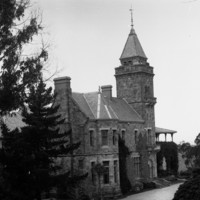 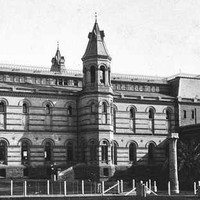 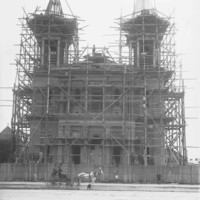 The construction of St Patrick's Church, c. 1913-1914. Edward Woods' architectural firm was responsible for its design

Adelaide Town Hall, c. 1870s. Edward Woods was one of the architects tasked with designing the Town Hall building 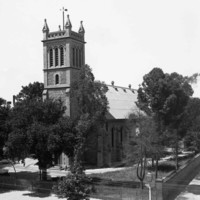 Holy Trinity Church, c. 1910. Edward Woods was responsible for redesigning the church during its 1888-1889 renovation

Image courtesy of the State Library of South Australia, SLSA: B 11228, Public Domain